Lewis Hamilton On Max Verstappen Tussle: We're Going To Be Sick Of Each Other!

Max Verstappen is making Lewis Hamilton work for his record-breaking eighth F1 title, but the Mercedes man is happy to be pushed 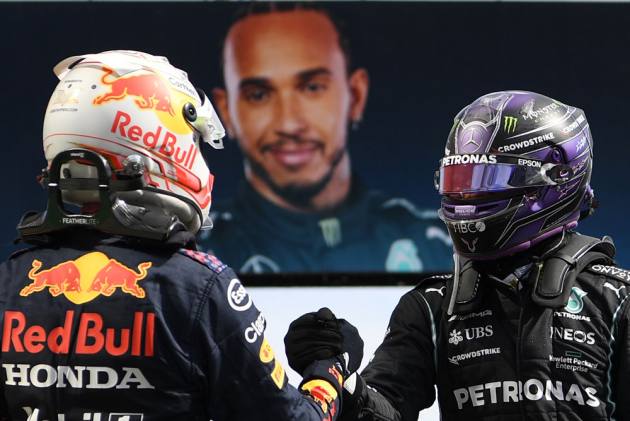 Lewis Hamilton is relishing his Formula One title fight with Max Verstappen and expects the battle to go to the wire, by which point the pair are "going to be sick of each other". (More Sports News)

Defending champion Hamilton landed another blow at Sunday's Portuguese Grand Prix, winning ahead of Verstappen to stretch his championship lead to eight points.

The Mercedes and Red Bull rivals have been the top two in all three races so far this season, with Verstappen boosted by the apparent superior pace in his car.

That superiority was less apparent in Portimao, where the Dutchman repeatedly complained of a lack of grip, even telling Sky Sports: "I hope we don't come back."

But Verstappen was still Hamilton's nearest challenger and the Briton is enjoying a "great fight".

"It's very tight," Hamilton told a news conference. "I saw that he'd gone in for the fastest lap and got it but obviously Valtteri [Bottas] ended up with it at the end.

"As you can see, it's a great fight between Mercedes and Red Bull – I'm sure also down the field.

"It's clear that we just have to continue. We're going to be pushing each other right until the last race.

"We're going to be sick of each other, I imagine, or at least sick of racing, because there are so many races."

Verstappen responded: "It's close. I wish it was closer. But it's a long season and we can't afford to have any retirements or silly mistakes, so we have to keep on doing what we're doing."

Three races in the bag, and eight points in it at the top #PortugueseGP #F1 pic.twitter.com/8VvuJESD2c

Hamilton won the championship by 124 points in 2020 and even then Silver Arrows team-mate Valtteri Bottas was the man in second.

Although he suggested Red Bull's standards slipped this week – seemingly relating to the grip issue – Hamilton welcomed the competition.

"I'm massively excited and driven," Hamilton said. "I think we all are, as a team, to be in the fight with Red Bull.

"This weekend I feel like Red Bull lost a little bit of performance, because I don't think we improved. From the last race to here, I think they took a slight step closer to us for whatever reason.

"But this is great. This is what we all live for. This is what we live and breathe for, to get up and fight and try to pull out the smallest bits of performance to be able to fight a great competitor."

Despite his own complaints, Verstappen acknowledged Red Bull cannot afford to make excuses if they plan to beat Mercedes.

He added: "Clearly we still have to improve and do better because we should be fast on every single track in every single condition, because the track is the same for everyone."