Life's Like That! Pigeon-Loving Deaf And Dumb Tennis Coach Smashed By COVID Pandemic

Mahesh Chaudhry has been working in Delhi schools for over two decades. The COVID-19 pandemic has taken away his only livelihood 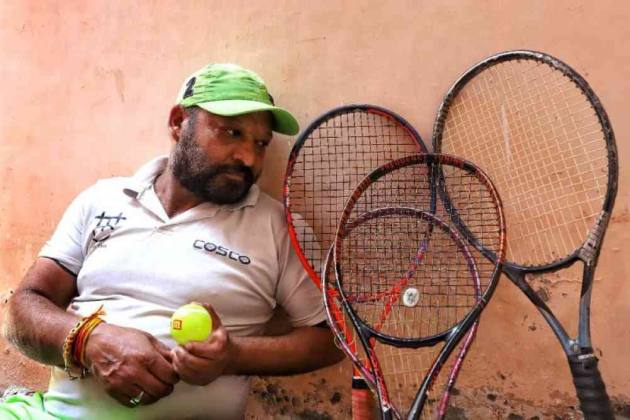 Life has come to a standstill for Mahesh Chaudhry. The ravages of the COVID-19 pandemic has been harsh to him and many others who won there daily bread from tennis coaching at schools and clubs. Mahesh's mornings and afternoon are painfully boring. (More Sports News)

For this 39-year-old deaf and dumb tennis coach, who lives in a joint family in Khanpur, a bustling place in south Delhi, every day is a challenge. No work since April last year has left Mahesh struggling to make ends meet.

Mahesh Chaudhry lives with his mother and he is the youngest among three brothers. He was born a special child and as he grew up, the family saw him as a curse and a burden.

Mahesh loved pigeons and could produce sounds to attract the birds. He soon became a pigeon seller but life had other plans for him.

Hemanshu Chaturvedi, who ran tennis coaching schools across Delhi, came as a messiah in Mahesh's life. Chaturvedi had come from Jaipur in 1992-93 and picked up strong and young lads from the Khanpur region to train and employ them as assistants in his various coaching projects.

In 1997, Chaturvedi found Mahesh after his elder brother Rajesh brought him to the Saket Sports Complex for a job.

“He had no formal education, was completely deaf and dumb but had a strong body. Since we could not communicate at all, I used to let him do sundry jobs like pick balls and put them in baskets. He did his work with sincerity and I liked him,” said Chaturvedi.

Under Chaturvedi’s tutelage Mahesh grew from a man running errands to a fitness trainer and then an amateur coach who could impart basic tennis lessons to school going children. He even officiated as chair umpire in AITA events and despite being completely illiterate, he handled matches with ease.

"Mahesh knew the rules so well that he would never get flustered as a chair umpire. Since he didn't speak or hear, any conflict on court over a point or a line-call would evoke zero reaction from him and the players, would be so frustrated at the umpire that they would return to play," Chaturvedi says with a smile.

Extremely sensitive, Mahesh was a hit among kids. He didn’t speak at all but Mahesh developed a great sense of communication through his roving eyes. They fondly called him ‘Bhaiya’ (brother) and no school event would be complete without this stocky and gently young man.

After a stint at the Saket Sports Complex, Mahesh had stints at three big schools in Delhi – Gyan Bharti, Kendriya Vidyalaya and then Laxman Public School. Till the pandemic struck and schools closed down in April last year, Mahesh was coaching at the ASN School in Mayur Vihar.

For the last seven years, from 8 in the morning till 2 in the afternoon, he would coach about 20 kids from kindergarten to Class XII every day. It was a routine that Mahesh loved and none of his 100 students missed his classes.

Mahesh earned about Rs 30,000 per month on an average. He did not save much because he had to contribute to the family’s kitty, whose main source of income came by renting a few rooms that the brothers shared. Now the tenants have all gone away and with virtually no income in the last 15 months, Mahesh and his family are struggling.

Sukhdev, his neighbour, says Mahesh has even sold off his pigeons. His love birds have all gone and Mahesh is a forlorn man waiting for the school doors to open and the tennis courts to come back to action.