Striker Kylian Mbappe's availability against Lyon is still not clear after the Frenchman twisted his ankle against Club Brugge. 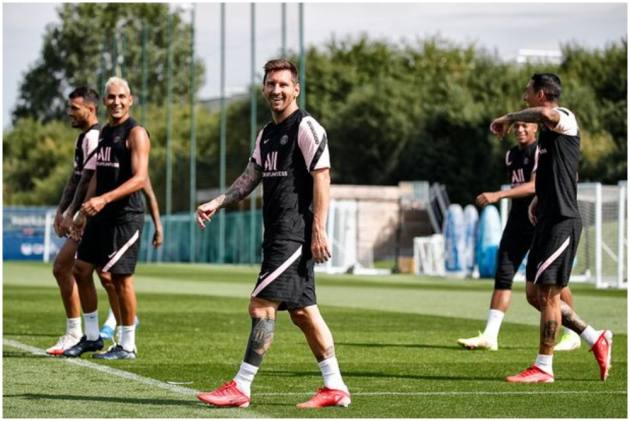 Lionel Messi is all set for his home debut as leaders Paris Saint-Germain aims for a sixth straight win when they face Lyon in Ligue 1 on Sunday. Messi played his first full game midweek in the 0-0 draw at Club Brugge, but the Parc des Princes crowd is set for the first glimpse of him after his surprise move from Barcelona. (More Football News)

PSG striker Kylian Mbappe awaits a fitness test on Sunday morning after twisting his ankle against Brugge. Lyon has won their previous three matches and coach Peter Bosz has said they are looking for a win against PSG.

“He is happy to be able to make his debut at the Parc des Princes in front of his fans tomorrow, he is calm and composed,” Mauricio Pochettino told reporters on Saturday. “But so is the whole team. Everyone is thinking about putting in the best performance possible, our goal is to win this game.”

Meanwhile, the Argentine manager is still unsure about Sergio Ramos’s availability as a niggling muscle problem is still frustrating the 35-year-old centre-half. “I don't have any details on when he (Ramos) will be available. We hope he will be available soon. He is well individually, he is calm and continues his preparation,” Pochettino said.

“We hope that he can play quickly and it is important that he can return to a good level, equal to that of his teammates,” he added. Elsewhere, unbeaten Nice host struggling Monaco in the French Riviera derby and third-placed Angers take on Nantes.

The French league match between Lens and defending champion Lille was interrupted for about 30 minutes when fans from the northern rivals clashed at halftime. After the first half ended on Saturday, a large group of Lens supporters invaded the field and ran to the away section where they fought with Lille fans. Riot police and stewards intervened and escorted them off the field.

An emergency meeting took place to decide whether the match at Stade Bollaert should continue. But after the second half got underway there was no further disorder and Lens won 1-0. Lens are unbeaten under coach Franck Haise and up to the second place.

Lille has won only once and the pressure is growing on coach Jocelyn Gourvennec, whose side is 13th and has conceded 12 goals in six games. It is the second high-profile incident of the season in France following a serious disorder at the Nice-Marseille game in August which was suspended for 90 minutes and called off.

Nice fans stormed the field and punches were exchanged with players and staff from Marseille. It is rescheduled for October 27. American winger Timothy Weah recovered from a thigh injury and went on in the 62nd minute for Lille and the first appearance since August 21. Weah, a son of Liberia president and former FIFA player of the year George Weah, had missed three World Cup qualifiers.

Veteran striker Burak Yilmaz went close to scoring for Lille midway through the second half when he flashed a header just over the crossbar from Benjamin Andre’s cross. Moments later, Yilmaz was thwarted by goalkeeper Jean-Louis Leca diving at his feet.

Those missed chances proved costly when Poland midfielder Przemyslaw Frankowski struck in the 73rd after being set up by Gael Kakuta. It was Frankowski's first goal since joining from Major League Soccer club Chicago Fire.

After forward Wesley Saïd had a second goal for Lille ruled out for offside following a video replay, Leca denied Yilmaz again as he broke through in stoppage time. Also, South Korea striker Hwang Ui-jo scored early and grabbed the late winner as Bordeaux won at Saint-Etienne 2-1 to secure its first win and move off the bottom into 14th spot.

Saint-Etienne, which equalised through forward Wahbi Khazri in the 72nd, is one of three teams yet to win a game and is in 19th place.