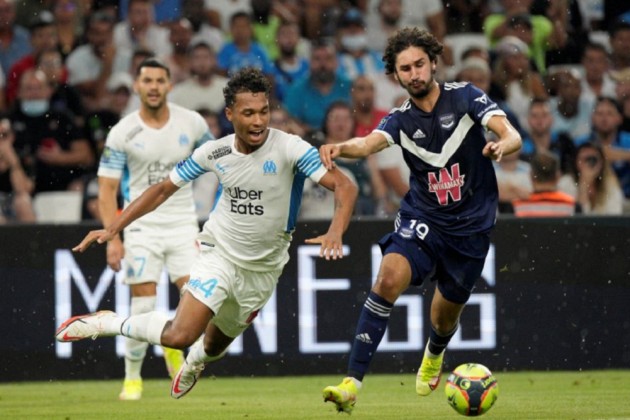 One week after coming back from two goals down to win 3-2, Marseille threw away a 2-0 lead to draw 2-2 with Bordeaux in the French league. (More Football News)

Dimitri Payet, who scored twice in last weekend's victory at Montpellier, netted with a superb long-range strike to make it 2-0 in the 40th minute at Stade Velodrome.

Seven minutes earlier, Turkey winger Cengiz Under opened the scoring with his second goal in as many games for Marseille.

But Marseille dropped off in the second half and allowed Bordeaux to respond with goals from 18-year-old center half Timothee Pembele — who is on loan from Paris Saint-Germain — in the 51st and forward Remi Oudin in the 57th.

Frustration got to Marseille defender Leonardo Balerdi, who was sent off in the 89th.

Fired by his previous club, Lyon's new coach Peter Bosz is still without a win after a resounding 3-0 loss at Angers earlier Sunday.

Since replacing Rudi Garcia at Lyon, Bosz has one point from two matches.

Bosz was dismissed by Bayer Leverkusen in March following a run of four wins in 17 games overall.

He was angry with the attitude of his players against Angers.

“Angers played as a team today and we were 11 players doing their own thing,” he said.

“I didn't see a team that wanted to win, and this disturbs me.”

Angers had to replace 10-year coach Stephane Moulin during the offseason and went for Gerard Baticle, a former Auxerre striker who was an assistant coach with Lyon for the past 10 years.

This is Baticle's first big managerial job, and his side has won both games, with five goals scored and none conceded.

Promoted Clermont joined Angers and PSG on six points after winning 2-0 at home to promoted Troyes.

Emerging striker Mohamed Bayo grabbed both goals to make it three in two games. He was the second tier's top scorer last season with 22 goals.

Forward Wahbi Khazri scored in the first minute as Saint-Etienne drew 2-2 at Lens.

Striker Ignatius Ganago equalized for Lens in the 35th, but forward Denis Bouanga put the visitors ahead shortly after the break before captain Seko Fofana earned Lens a point.

Having needed a promotion-relegation playoff to stay in the top flight last season, Nantes is looking confident after a 2-0 home win against Metz.

Brest scored a stoppage-time goal to earn a 1-1 home draw with Rennes.

On Saturday, PSG presented Lionel Messi to the home crowd and he watched his new teammates beat Strasbourg 4-2. (AP)