Ligue 1: Marseille Win At Nice As Homophobic Chants Cause Stoppage

Marseille emerged 2-1 winners against Nice, but not before a controversial incident at Allianz Riviera. The game had to be paused due to homophobic banners. 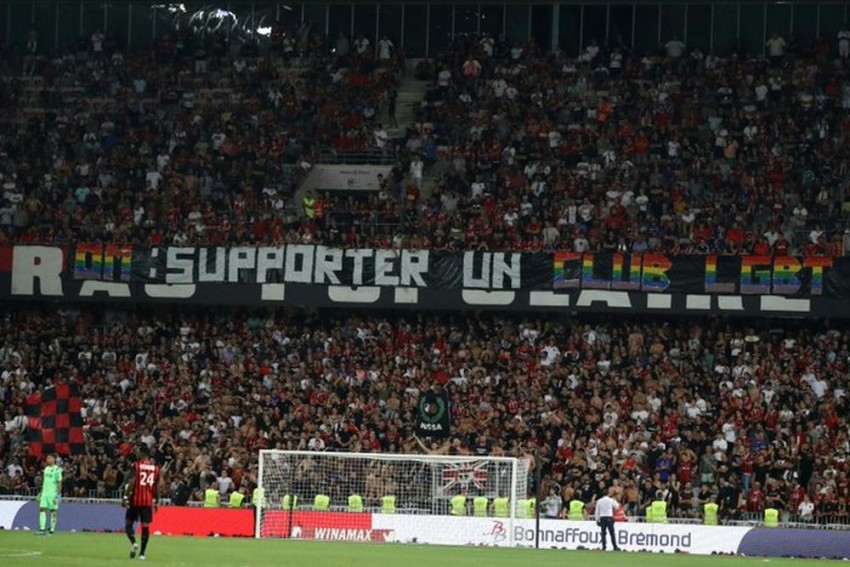 One of the banners that caused Nice’s match against Marseille to be suspended in the first half.
Twitter
Outlook Web Bureau August 29, 2019 00:00 IST Ligue 1: Marseille Win At Nice As Homophobic Chants Cause Stoppage 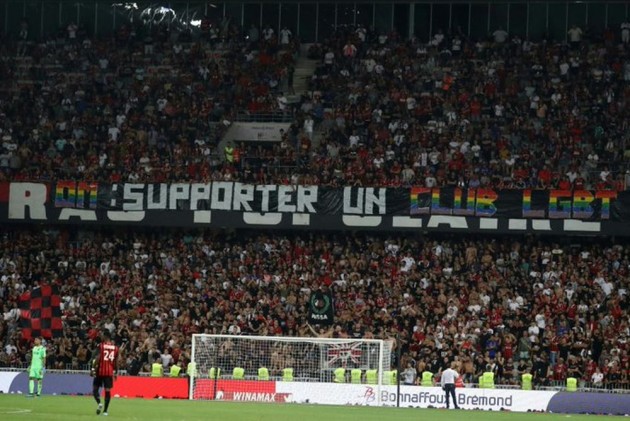 Marseille won their first match under new coach Andre Villas-Boas on Wednesday (August 28) thanks to a 2-1 derby win at Nice in a match that was suspended in the first half following homophobic abuse from the home side's hardcore supporters. (FOOTBALL NEWS)

Dimitri Payet moved his side up to 13th on four points with a spot-kick with 17 minutes remaining after Nice midfielder Wylan Cyprien had levelled Dario Benedetto's first Marseille goal with his own penalty.

The France international's strike also ended Nice's brief perfect start in the new season's third round of matches, but the clash was dominated by the over 10-minute suspension ordered by match officials as part of a crackdown on offensive chanting from French football authorities.

Players from both teams were escorted from the pitch in the 28th minute of the contest following repeated appeals to Nice fans to stop chants of "Marseille are a bunch of queers" and "Go f**k yourself, Ligue 1".

Fans also unfurled homophobic banners including one which called Marseille an "LGBT club".

The second chant, sparked by the French league's attempt to stamp out homophobic chants from the stands, continued as the players returned down the tunnel, where they waited for the still-goalless match to recommence.

Villas-Boas said referee Clement Turpin "did the right thing in stopping the match" adding that the abuse was "above all a societal problem", while Nice coach Patrick Vieira said that he was "absolutely right to interrupt" proceedings.

However, goalscorer Cyprien bemoaned Turpin's decision, saying that "we can't stop every match each time some idiot does something, otherwise we will never play".

"I am against all discrimination, be it against gays or racist abuse," he continued to Canal+. But we can't stop matches as soon as there are insults that have nothing to do with the gay community."

Instructions were sent to referees before the start of the season to stop matches if homophobic songs could be heard, and the Ligue 2 game on August 16 between Nancy and Le Mans was halted for a few minutes -- a first in France.

That match only resumed after Nancy players pleaded with their fans to stop, but the club was still hit late on Wednesday with a one-game closure for one stand by the French league.

The league has mooted the idea of introducing a list of banned words in football stadiums in an attempt to combat homophobia and bad language.

On Sunday, a referee threatened to stop Monaco's 2-2 home draw with Nimes after the away fans insulted the league organisers with offensive language.

The controversy comes just two days after Ineos announced their purchase of Nice, who were aiming to maintain their perfect start against fellow south coast side Marseille, yet to win under new coach Villas-Boas.

Bob Ratcliffe, the brother of billionaire Jim Ratcliffe who owns petrochemical giant Ineos, looked on embarrassed from the stands as his team were forced off the field due to their fans' behaviour.

Earlier, Nigerian starlet Victor Osimhen shot a brace that took him to the top of the Ligue 1 scoring charts as Lille cruised to a simple 3-0 win over Saint-Etienne.

The 20-year-old fired in the hosts' opener shortly before the break and sealed the points with a fine turn-and-strike 15 minutes from the end, taking his tally to four goals from the season's opening three matches and moving Lille into fourth.

Jonathan Bamba had added the second from the spot six minutes earlier after being upended by Mathieu Debuchy.

Sri Lanka's Ajantha Mendis Retires From All Forms Of Cricket