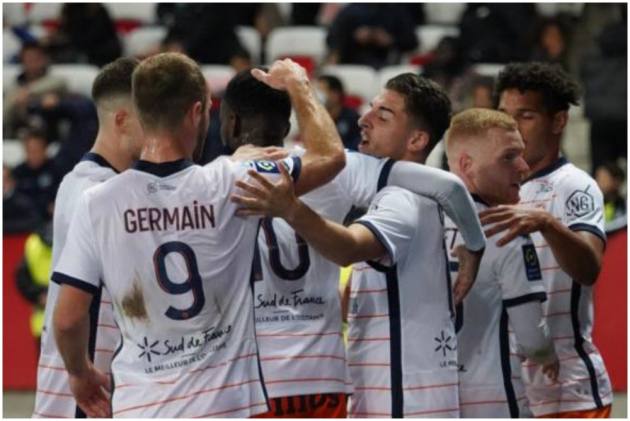 Nice wasted a chance to move to second place in the Ligue One after they lost 0-1 to Montpellier on Sunday. (More Football News)

Andy Delort started upfront for Nice against the club that sold him this summer in a move that angered Montpellier fans.

His former teammate, Florent Mollet, who used to set up Delort for goals, netted the winner for sixth-place Montpellier in the 80th minute.

Earlier, Marseille dropped vital points after it failed to break down 10-man Metz in the second half and drew 0-0 at home.

Including stoppage time, Marseille had an extra player for more than 40 minutes after Metz central defender Jemerson was sent off in the 56th.

Brazilian midfielder Gerson scored two minutes later for Marseille, but his close-range effort was ruled out after a video review picked up a foul on defender Dylan Bronn.

The 1 PM kickoff was perhaps unfair on Marseille, which played a Europa League game on Thursday night.

In Sunday's late game, teenage defender Adrien Truffert came off the bench to net twice as fifth-place Rennes beat seventh-place Lyon 4-1 at home, as coach Bruno Genesio downed the side he led from 2015-19.

Genesio is also the only coach to have secured a win against PSG this season.

Striker Gaetan Laborde left Montpellier — where for several seasons he enjoyed a sterling partnership with Delort — to join Rennes during the offseason.

His header from winger Benjamin Bourigeaud's cross put his new team 1-0 up just before the break and moved him to level with Lille's Jonathan David at the top of the scoring charts with eight goals.

Mali right back Hamari Traore's goal shortly after the break made it 2-0, and then the 19-year-old Truffert bagged two before Brazil midfielder Lucas Paqueta pulled one back from the penalty spot in stoppage time.

Some pressure was lifted off Saint-Etienne coach Claude Puel after his side rallied from 2-0 down to score two injury-time goals and win 3-2 against promoted Clermont.

Saint-Etienne's first victory in 13 games moved it off the bottom and sent Metz there instead.

PSG won 3-2 at Bordeaux on Saturday but conceded careless late goals after leading 3-0.