Nice are only eight points behind the league leader Paris Saint-Germain. 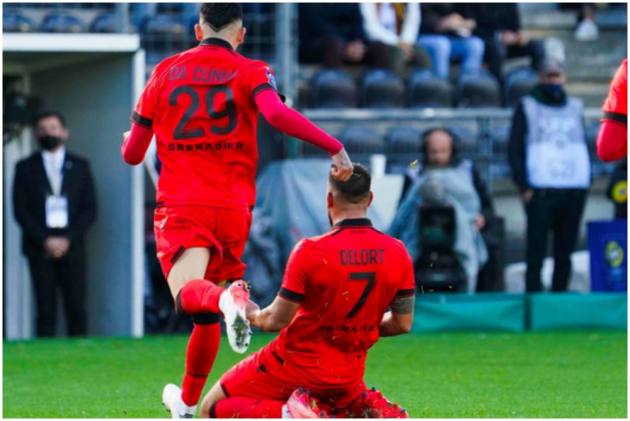 Nice moved up to second place in the French league with another comeback win as Andy Delort netted twice in a 2-1 victory over Angers on Sunday. (More Football News)

Angers winger Sofiane Boufal had opened the scoring from the penalty spot in the 29th minute after Youcef Atal tripped him inside the area.

But Delort equalized with a deflected shot in the 57th before slamming home a volley from the edge of the box in stoppage time. The Nice striker could have had a hat trick but his earlier header in the 23rd minute hit the post.

Angers goalkeeper Paul Bernardoni repeatedly frustrated the visitors having tipped Amine Gouiri’s long-range strike over the bar in the 69th before parrying a low drive from the Nice forward in the 72nd.

An under-strength Nice side came into the game missing Justin Kluivert, Calvin Stengs, Evann Guessand, and Robson Bambu through injury as well as Kasper Dolberg for personal reasons.

Nice overcame an even larger 2-0 deficit to edge Lyon 3-2 the previous weekend.

The victory moves the club to within eight points of league leader Paris Saint-Germain.

On Saturday, Houssem Aouar and Karl Toko Ekambi scored as Lyon defeated Lens 2-1 to move within two points of the visitors.

In Saturday’s other game, Wahbi Khazri scored a contender for goal of the season to salvage a point for last-place Saint-Etienne in a 1-1 draw at Metz. Khazri equalized in the 16th with an outrageous lob from more than 70 yards.

On Friday, Angel Di Maria set up the equalizer and then netted the winning goal himself as PSG rallied past defending champion Lille 2-1.