Joan Laporta discussed the futures of Lionel Messi and Ronald Koeman on Friday, and he confirmed new signings are imminent for Barcelona 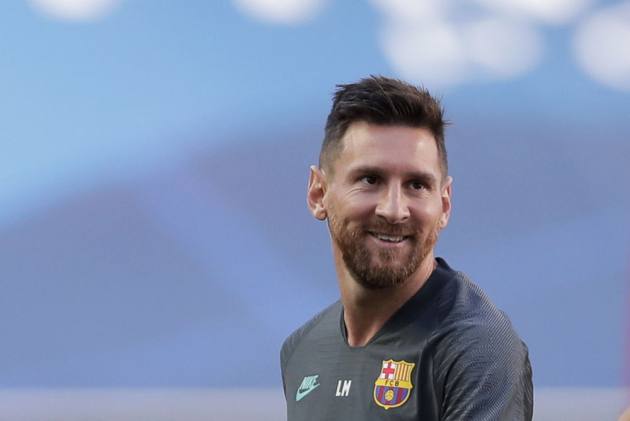 Messi's current deal is set to expire at the end of June but the Spanish club are in negotiations to make sure their talisman remains at Camp Nou.

Having pushed to leave Barca a year ago, the 33-year-old scored 30 goals in 35 LaLiga appearances to finish as the competition's leading scorer, though Barca finished behind both champions Atletico Madrid and rivals Real Madrid in the table.

Laporta provided an update on Messi's situation at a lengthy news conference on Friday that covered a number of topics, during which he confirmed new signings are imminent.

"Messi's new contract is going well, but it has not been done yet," Laporta announced.

"I see our relationship as very good. Messi loves Barca. We know that he is a man and a player conditioned by his incredible talent.

"Of course, we all want him to continue, and we hope that he will stay with Barca."

âÂÂÂÂWe draw inspiration from @JohanCruyff. We are ðÂÂÂÂÂÂðÂÂÂÂ³ðÂÂÂÂ¶ðÂÂÂÂºðÂÂÂÂ§ðÂÂÂÂ§ðÂÂÂÂªðÂÂÂÂ´ðÂÂÂÂµðÂÂÂÂ¢ðÂÂÂÂ´ in all senses of the word. We like winning while playing well.âÂÂÂÂ

Barca are expected to sign defender Eric Garcia and forward Sergio Aguero in the transfer window, with both players soon to be out of contract at Manchester City.

"Our ambition is to improve the current squad and we are working on that very hard," Laporta said.

"Next week, we will talk about new arrivals for the first team. You will see the result of some of the work we have been doing.

"I understand that people want us to work in a rhythm that is faster, but we believe in working step by step, little by little and doing things right. We need to make two situations compatible, when I'm talking about the liquidation of one project and the beginning of a new one."

It remains to be seen whether Koeman will be around to continue with the new Barca project; the Dutchman is set to hold a fresh round of talks with Laporta in the near future after completing his first campaign in charge. Koeman and his agent met with Laporta this week for an initial conversation.

"There are no transitional seasons at Barca," Laporta said. "We [the new board] arrived halfway through the season and said we would give our evaluation of the coach at the end of the season and communicate our decisions then.

"We've always worked with the maximum respect for Ronald Koeman. Of course, the admiration we have for him as the player who won us the European Cup at Wembley, and he still has a contract in place.

"At the end of the season we will evaluate his time here and make decisions accordingly. We spoke to Koeman and will continue to do so when making important decisions."

Laporta was also questioned about links to Xavi and Pep Guardiola, two legendary names at the club who have been rumoured to be potential replacements for Koeman.

“Out of respect we owe Koeman, he has a current contract and don't rule it out [that he stays]," Laporta said. "We are talking."