Despite continued speculation over his long-term future, Lionel Messi wants to help Barcelona come through 'a difficult time' 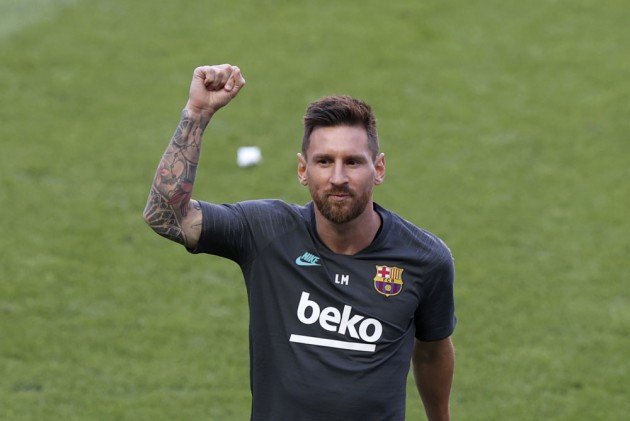 Lionel Messi is determined to help Barcelona win trophies after admitting the saga surrounding his future has affected him this season. (More Football News)

The Argentine superstar appeared determined to leave Camp Nou in the previous transfer window, believing he was entitled to depart on a free transfer due to a clause in his contract.

However, Barca refused to sanction a move without a fee being involved, so Messi confirmed he would stay for the 2020-21 campaign, the final year on his current deal.

His long-term future still remains unclear, with more potentially becoming known when an in-depth interview with the 33-year-old is broadcast by LaSexta on December 27.

RAC1 released a short excerpt on Monday, in which Messi outlined his continued commitment to the cause for the coming months, ruling out any idea of a January transfer.

"The truth is that today I'm fine," Messi said in conversation with journalist and presenter Jordi Evole.

"It's true that I had a very bad time in summer. What happened before the summer, because of how the season ended, the burofax and all that. Then I dragged it a bit at the beginning of the season.

"Today I'm fine and I feel like fighting seriously for everything we have ahead of us.

"I'm excited. I know the club is going through a difficult time, at club and team level, and it is difficult everything that surrounds Barcelona but I'm looking forward to it."

Messi was strongly linked with a reunion with Pep Guardiola at Manchester City earlier in the year, while more recent rumours have suggested Paris Saint-Germain could be his next destination.

For now, though, he appears to be staying put.

Barca have struggled for consistency so far this term under head coach Ronald Koeman, winning just six of their 13 league outings so far to sit outside the top four in the table.

They have qualified for the knockout stages of the Champions League, finishing behind Juventus in their group. The last-16 draw paired them with PSG, meaning a clash with former Barcelona team-mate Neymar.

Messi has contributed nine goals in all competitions so far, taking his career tally for Barca to 643. In doing so, he tied Pele's record for most scored by a player for one club, equalling the legendary Brazilian's feat when finding the net for the 450th time in LaLiga against Valencia on Saturday.