Lionel Messi is reportedly considering leaving Barcelona next year, but Quique Setien claims he has not heard the forward say so 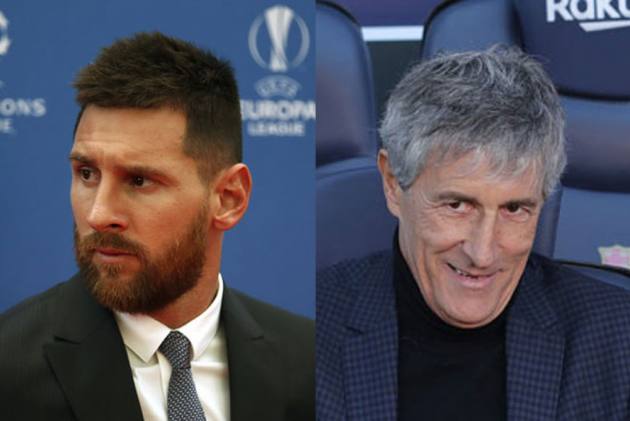 Quique Setien refused to be drawn into a debate around Lionel Messi's future following reports he will leave Barcelona next year, though the coach was adamant he has not heard the player himself state he wants to move. (More Football News)

Barca were held to a 2-2 draw by Atletico Madrid on Tuesday, and Real Madrid's subsequent win over Getafe on Thursday allowed Los Blancos to go four points clear at the top of LaLiga.

It was the third match in four that Barca have failed to win and reports began to circulate on Thursday that Messi has decided to leave in 2021 when his contract expires.

While some have put that down as a ploy to oust unpopular club president Josep Maria Bartomeu, others are concerned about such an idea taking root and becoming reality, with Messi reported to like the idea of once again linking up with Manchester City boss Pep Guardiola.

Rumours of in-house squabbling and a poor relationship between the players and coaching staff have also developed in recent weeks, but Setien insists he has heard nothing from Messi about his supposed plan to leave.

"I am not going to speculate on this because I have not heard him say anything about it and it is not my job," Setien said in Saturday's pre-match news conference ahead of a meeting with Villarreal.

"I repeat, he looks well to me, Leo. The rest is speculation that does not even enter my consideration; that's what you [the media] are for. I see him training well, nothing more."

Riqui Puig is a Barca player around whom there is much positivity, with the 20-year-old midfielder producing some effective displays since the resumption and that has not been lost on Setien.

"We have all seen his level," he said. "Riqui has taken a very important step and has gained continuity in these games, but I tell him not to rest on what he's doing, but to improve.

When @RiquiPuig was just a youngling.

"He is aware of the opportunity that has been given him, and this is the way. Then the rest, we'll see."

Barca return to action on Sunday at in-form Villarreal, who have won five and lost none of their six matches since LaLiga resumed last month.