If Lionel Messi is to leave Barcelona at the end of the season it will not be due to doubts over the club's direction, according to boss Ronald Koeman 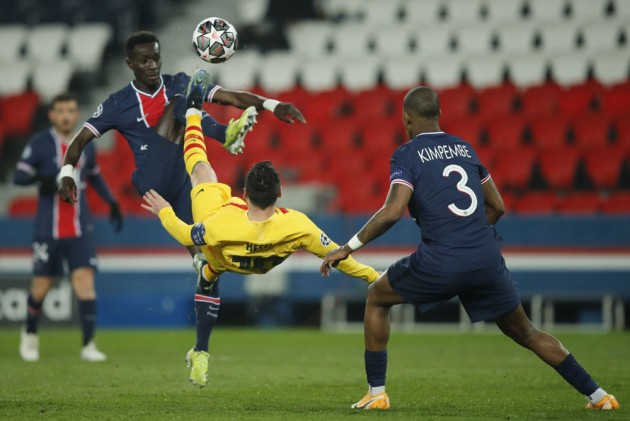 If Lionel Messi is to leave Barcelona at the end of the season it will not be due to doubts over the club's direction, according to boss Ronald Koeman. (More Football News)

The Catalan giants were knocked out of the Champions League in the last-16 stage on Wednesday after a 1-1 draw with Paris Saint-Germain at the Parc des Princes.

That followed the Ligue 1 side's thumping 4-1 win in the first leg at Camp Nou last month and means Barca have failed to reach the quarter-finals of the competition for the first time since the 2006-07 season. Their run of 13 consecutive last-eight appearances was the longest in Champions League history.

Messi, who cancelled out Kylian Mbappe's opener with a stunning strike before missing a penalty, has been tipped to leave on a free transfer at the end of the season, with PSG and Premier League leaders Manchester City the reported frontrunners for the 33-year-old.

However, new Barca president Joan Laporta is desperate for the six-time Ballon d'Or winner to sign a new deal, while Koeman believes any decision the Argentina international makes about his future will be influenced by the club's commitment to giving young players a chance.

"Leo has seen for quite some time that the team is improving thanks to all the changes we've made," he told reporters.

2004/05 - For the first season since 2004/05 both Cristiano #Ronaldo and Lionel #Messi haven’t reached the Champions League Quarter-Finals. Kingdom.#UCL #ChampionsLeague pic.twitter.com/7jd9GY1oes

"Particularly, we have young players of great quality. We've got a great future ahead. Leo can't have any doubts about what the future holds for this team."

Barca started on the front foot against Mauricio Pochettino's side and only a combination of wayward finishing and smart goalkeeping from Keylor Navas ensured they did not go in at the interval ahead.

Indeed, they took 16 shots during the opening 45 minutes – the most they have had in the first half of any game since January 2019.

Messi alone had six shots before half-time, which is the joint-highest in this season's Champions League alongside Borussia Monchengladbach's Breel Embolo.

Despite exiting the competition, Koeman was pleased with his side's display and believes it laid down a marker for next season.

"Okay, we are out, which is what counts in this sport," he added. "But we leave with good sensations. We had opportunities to make things very complicated for our rival.

"We were the superior team in the first half, taking big risks at the back with man-to-man marking. Really, we deserved more for that effort.

"It should at least have been 2-1 to us at half-time. If we'd led at the break, the second half would have been a whole different affair.

"In the first leg they were ultra-effective in front of goal and in this match we weren't. They scored four, here we scored once. That comparison is the big difference across this tie.

"But no criticism of the lack of cutting edge. We put in a huge effort and merited more; maybe just a hint of luck. Their keeper was the player of the match. We had our chances but couldn't take them.

"We are departing this Champions League in a very different manner from the way we did last season.

"In this game, we hit our level and that's the road we have to follow. Clearly we are sad but the impression we leave behind after this match is important."