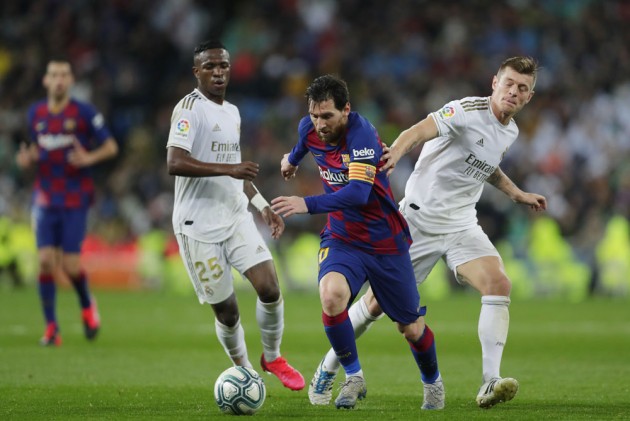 Real Madrid went into Sunday's El Clasico fully aware that defeat could have proven ruinous to their season, leaving a five-point gap at the LaLiga summit after they suffered a massive midweek blow in the Champions League. (More Football News)

Zinedine Zidane and Madrid were tactically outclassed in their own stadium on Wednesday, with Manchester City coming away from the first leg of their Champions League last-16 tie with a potentially vital 2-1 win.

Pep Guardiola exposed their weaknesses with a switch of formation and system to focus on troubling Madrid behind their attack-minded full-backs – chiefly with Gabriel Jesus on the left. It proved decisive.

Barca coach Quique Setien confirmed in his pre-match news conference that he met with City boss Guardiola after that match, acknowledging there were elements of City's set-up that Barca would look to expose, aware they could "come in handy".

ZIZOU GETS IT RIGHT

He set Madrid up proactively with two holding midfielders, and Vinicius Junior and Federico Valverde out wide, the latter two sat deep off the ball to essentially form a flat midfield.

The lung-busting Valverde's presence on the right ensured Jordi Alba had little luck in attack and plenty to think about at the back.

Toni Kroos' restoration to the starting XI after missing out against City was arguably the real key for Madrid, though.

The German's exclusion in midweek came as something of a shock and without him Madrid's overall pass completion was 86.5 per cent, and that increased to 88.2 per cent with him. Although minor in those terms, every little helps in matches of fine margins.

Against City, Madrid rarely looked in control and their move construction from midfield when transitioning was rather scattergun, Kroos' composure and vision obviously missed.

Upon his return, Kroos barely put a foot wrong all match. Suddenly Madrid seemed far more effective at picking their way through a press, as evidenced by the numerous counter-attacks they were able to launch on Sunday.

Kroos was accurate with 99 per cent of his passes and then played the decisive ball for Vinicius to put Madrid ahead, slipping the Brazilian into the left side of the box and he beat Marc-Andre ter Stegen with a little help from a Gerard Pique deflection.

Two best chances of the game so far have been ours: @arthurhromelo & Leo #Messi  pic.twitter.com/mN60IgcLMX

MESSI FAILS TO SLICE THROUGH MADRID

Like Kroos, Messi was also tidy in possession, hitting his mark with 95 per cent of his passes. But he laid on only a single goal-scoring chance, while he was thwarted by Thibaut Courtois for his most presentable opportunity in the first half.

Messi set a new record for Clasico appearances by a Barca player – it was set up for a fittingly devastating performance to put one hand on the title.

But Barca's talisman simply failed to instigate effectively against Madrid's packed midfield, potentially leading to questions about his fitness after he was spotted seemingly limping earlier in the day.

And therein lies Barca's biggest problem: if Messi fails to turn the screw, they have no one else capable to rising to that level.

With Cristiano Ronaldo watching on in the stands, Messi's magic was in disappointingly short supply – but masterful Kroos validated Zidane's decision to recall him by steering Madrid to a potentially season-defining victory as they returned to LaLiga's summit.