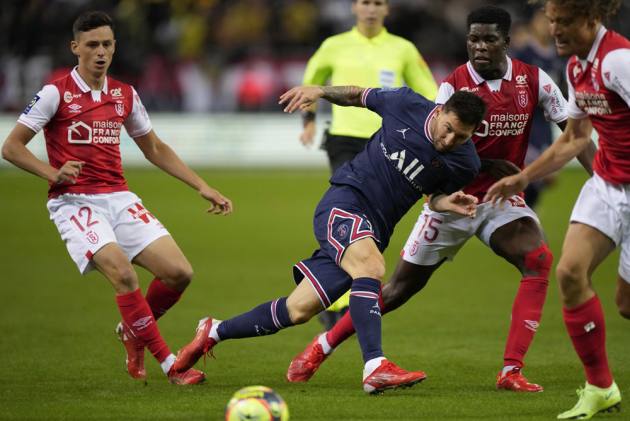 A new chapter in Lionel Messi's glorious football career started on Sunday. Messi, who left Barcelona earlier this month on a transfer, came as a substitute for his former Barca team-mate Neymar in the 66th minute at Stade Auguste-Delaune II. (More Football News)

This was the first time that the Argentine has played a competitive match for a club other than Barcelona. Before his free transfer to the French capital, th3 34-year-old had helped the national team to the Copa America triumph, their first international title since 1993.

But the job was already done by wantaway French star Kylian Mbappe, who scored a brace in the 16th and 63rd minute.

Mbappe, who's strongly linked to a move to Real Madrid before the close of the transfer window, left high to connect a header for his opener from an Angel Di Maria delivery then slotted home the second from an Achraf Hakimi cross.

It was however not a routine win for the star-studded team from the French capital. They were tested by the brilliance of Ilan Kebbal, and also El Bilal Toure, with both coming close to beating Keylar Nevas.

In fact, Messi himself failed to live to the expectation, as many would have imagined on his bow. He was tightly marked and the best chance he got was a linked-up with Mbappe in the 77th minute.

Messi beat a crowded defence then released the ball for Mbappe on the right. But Mbappe, instead of going for a hat-trick, tried to set up his new team-make with a return pass from near the byline. By then the path was already blocked and the ball failed to reach the intended target.

After the match, PSG manager Mauricio Pochettino said that he's "very happy to see him [Messi] make his debut. It was important for him. He is far from his best form, but he is training very well."

Now, the players will take an international break. Messi will lead Argentina in the FIFA World Cup qualifiers.

"He will be better after the [international] break. We expect the best from him," Pochettino added.

After the international break, Messi is likely to make his first start for PSG against the newly promoted Clermont Foot at Parc des Princes.

PSG have won all four matches so far in the new Ligue 1 season and are top of the table, while Reims are slipped to 17th with the first defeat. They entered the match unbeaten, having played out three draws.

Angers are second with three wins and a draw, followed by Clermont with two wins and two draws.