Lionel Messi Only Ensured To Stay At Barcelona Under My Presidency, Joan Laporta Claims 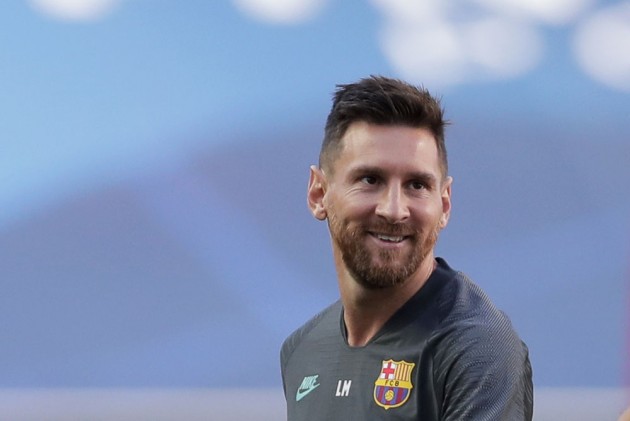 Lionel Messi is only ensured to stay with Barcelona if the presidential elections are won by Joan Laporta, says the favourite for Sunday's vote. (More Football News)

Laporta is bidding to return to the top job at Camp Nou following a successful tenure between 2003 and 2010, which began with the signing of Ronaldinho and concluded amid Pep Guardiola's glorious era in charge.

The emergence of Messi as world football's pre-eminent superstar also happened during that period and Laporta feels his established relationship can help to patch things up between the club and their record goalscorer.

Messi sought to leave Barca after the end of last season and is yet to announce his intentions for when his contract expires in June, with Manchester City and Paris Saint-Germain each linked to the 33-year-old.

Laporta was speaking at a debate alongside fellow candidates Victor Font and Toni Freixa on Tuesday.

Font believes his pledge to bring in Xavi as Barca coach would be persuasive for Messi, who he has earmarked for "a life contract", but Laporta primarily turned his attention towards Freixa, who worked under the presidencies of Sandro Rosell and Josep Maria Bartomeu when cracks in the relationship with the six-time Ballon d'Or winner started to appear.

"We will not be able to compete in money with other offers that [Messi] has," Laporta said.

"What he wants is to win again. I have a great relationship with Leo and he will value the proposal I make.

"I am the only one who can ensure his continuity. If I don't win, I'm sure Leo won't continue at Barca.

"He was not very happy with Freixa's time, when they let him see that he was expendable.

"My relationship with the Messi family has always been excellent."

Bartomeu's tenure, which ended in resignation last October after the Messi crisis was partially averted, was cast in an unsavoury light once more on Monday.

The former president was among four men arrested in relation to a raid on Barcelona's club offices by Catalan police, who are investigating possible economic crimes under Bartomeu's administration – reportedly in relation to the "Barcagate" scandal where a third party was allegedly paid to smear club greats including Messi and Guardiola.

The 58-year-old was provisionally released on Tuesday after spending a night in jail, appearing before a judge and exercising his right not to testify to charges of unfair administration and corruption in business.

Freixa expressed "sadness" and "surprise" that such matters should come to a head in election week, although Font went on the attack.

"[Bartomeu's arrest shows] the need and urgency to turn the page and build a new club model to prevent these things from happening," he said.

"We are talking about the possibility that a former president has used money from the entity to attack players and people around Barcelona, including myself."

Laporta, arguably granted such a luxury by his strong position in the polls, opted to remain above the fray on the matter.

“We cannot prejudge or take advantage of this situation for our own benefit," he said.

"You have to let the process evolve. If responsibilities have to be clarified, we will do it."