Lionel Messi To PSG: If You Asked Me If I Want Neymar And Kylian Mbappe, I'd Say Yes - Barcelona Boss Ronald Koeman 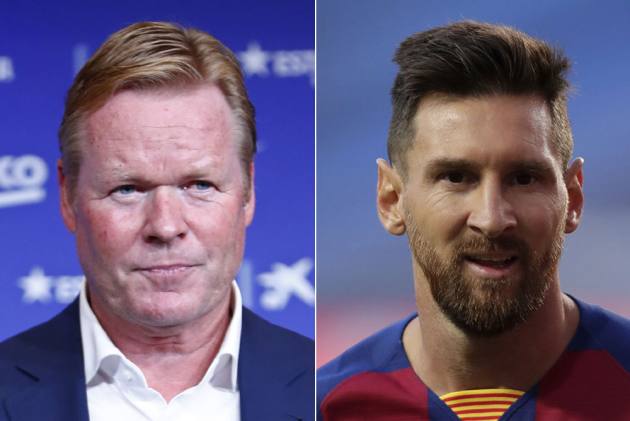 Leonardo said on Monday PSG have a seat "reserved" at the table of clubs who are "following closely" the developments around Messi's future.

The six-time Ballon d'Or winner is in the final six months of his Barca contract and could leave on a free transfer after this season.

Koeman, though, thinks it is normal for top players to be coveted by other clubs, saying he could never claim to have no interest in having PSG's star forwards at his disposal.

"If you ask me if I'm interested in Neymar and [Kylian] Mbappe, I'd say yes," he told reporters on Wednesday. "I don't know what will happen in the future; I can't give an opinion on those. We try to have the best squad possible."

Messi is serving a two-match ban for his red card in Barca's Supercopa de Espana final defeat to Athletic Bilbao, although the club are appealing against the punishment.

"The club told me it's two games, the club doesn't agree [with the sanction] and we'll see," said Koeman. "There are things that can be defended and hopefully they reduce the sanction. If not, we play two games without Leo.

"We've trained, Leo has trained with a lot of eagerness and I haven't seen anything odd. Everyone is sad for the Supercopa result, but we're on the road to better things, above all defensively. Leo is right in the middle of this."

Barca face a Copa del Rey clash at Cornella, the team that shocked LaLiga leaders Atletico Madrid in the previous round, on Thursday.

Sergino Dest and Sergi Roberto are sidelined with minor injury problems and Koeman says further first-team regulars will be rested given both Barca games at the Supercopa went to extra time.

"For them, it's the game of the year and for us it's the next one to be ready for. We have to go through because we're Barcelona. It depends a lot on mentality," he said.

"We're angry, it's normal. We have to be like that because we had the Supercopa close and they equalised in the last minute.

"I think we're on a good path - I think so, at least. And we have to keep moving forward. There are players with knocks but it's normal after two matches in extra time and two flights.

"We're going to make changes. We'll see tomorrow [how many]. We want to put out a strong team and, above all, a team that's strong mentally."