Lionel Messi reportedly has no plans to hang around at Barcelona, while Neymar could be targeted for a return 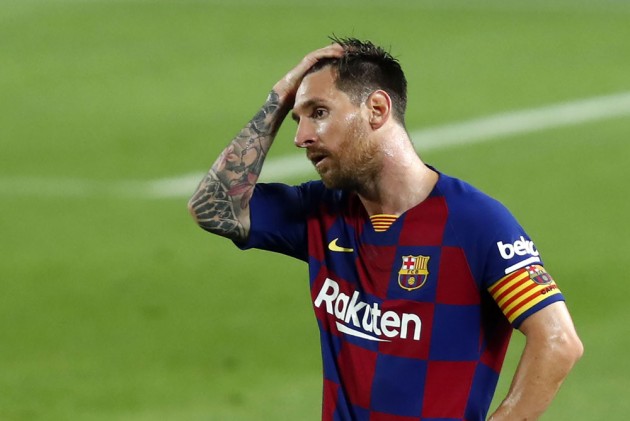 Lionel Messi reportedly has no plans to hang around at Barcelona, while Neymar could be targeted for a return. (More Football News)

Amid the chaos at the LaLiga giants, there is fresh speculation over Messi's future.

The superstar is contracted at Barca until 2021 – but perhaps he could make a move sooner.

Messi wants to leave Barcelona immediately, according to Esporte Interativo.

The six-time Ballon d'Or winner has been linked to Premier League giants Manchester City and Serie A side Inter recently.

Contracted until next year, Messi was expected to re-sign at Barcelona, but their capitulation in the Champions League has led to chaos at the club.

ALSO READ: Who Will Replace Setien As Barcelona Head Coach?

- With Barcelona moving on from Quique Setien, where to next for the LaLiga giants? Sport reports Ronald Koeman and former Tottenham manager Mauricio Pochettino are the main candidates, while AS says the Netherlands head coach is the frontrunner.

- Moves are also expected at Camp Nou. According to Sport, Barcelona are preparing a deal for Paris Saint-Germain star Neymar, ready to offer Antoine Griezmann and €60million to bring the Brazil international back to the club. AS says Barca are also prepared to sell Arthur, who is joining Juventus, Ivan Rakitic, Arturo Vidal, Martin Braithwaite, Junior Firpo, Samuel Umtiti and Ousmane Dembele.

- Pochettino is reportedly an option for Barcelona, but the Argentinian may have options. The Sun reports City are eyeing Pochettino amid doubts over Pep Guardiola's future as manager.

- It looks like Pierre-Emerick Aubameyang is staying at Arsenal. The Telegraph reports Arsenal have agreed terms with the forward over a new deal.

- Chelsea are expected to sign at least one defender this close season. According to the Mirror, they are preparing a move for City defender John Stones – even if they land Brighton and Hove Albion's Lewis Dunk.