Lionel Messi's Last Dance: Records Barcelona Star Can Break – And What Could Hold Him Back

History beckons for Lionel Messi at Barcelona in 2020-21, but only if the team can get their act together and challenge for top trophies 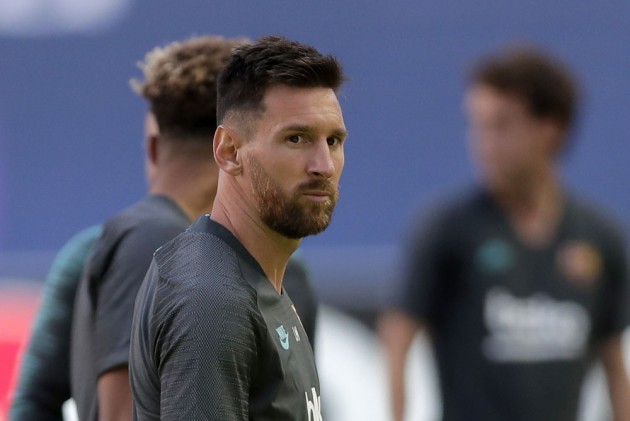 He might not have buried the hatchet, but Lionel Messi has promised Barcelona he will give his all in the coming season. (More Football News)

His attempt to leave the club, played out in public long before he spoke openly about his plans, ended with him accepting he will spend at least one more year at Camp Nou.

Messi is still angry with president Josep Maria Bartomeu, still upset with the way the team has declined since 2015's treble, but he was smiling again when he played in the 3-1 friendly win over Gimnastic, a grin that gladdened the hearts of Barca fans across the world.

So, with exit talks on ice, the focus is once more on how Messi can carry this team to domestic and European success while the impact of that 8-2 battering by Bayern Munich last month still lingers.

He managed 31 goals and 25 assists last season, the latter number his highest such tally in five years, the former the lowest. He completed more dribbles per game than ever (5.91) but recorded his lowest shots-per-game tally in at least five years (4.57).

The freescoring sensation of his earlier years is past; he is now creator-in-chief, a deeper-lying attacking menace, on whom the pressure is arguably greater than ever after years of mismanagement of the playing squad from those above.

THE RECORDS HE HOLDS

This is just a handful, of course.

Messi is the all-time leading goalscorer in LaLiga with 444. In Europe's top-five leagues, only long-time adversary Cristiano Ronaldo has more (447).

In all competitions for Barca, Messi has scored 634 goals and provided 254 assists in 731 appearances. That puts him on 888 goal involvements for the club - a tally nobody even comes close to matching.

Messi has scored at least 30 goals in each of the last 12 seasons and is the only player to score at least 10 in 14 consecutive LaLiga campaigns. He holds the record for the most in a single season, too: he scored 50 in 2011-12.

And, of course, he is the only man to win the Ballon d'Or six times.

THE RECORDS THAT BECKON

If Messi features in 31 of Barca's 38 LaLiga matches, he will eclipse Xavi's record of 505 appearances for the club in Spain's top flight. He will also surpass Xavi for games in all competitions for the Catalans (767) if he plays 37 times overall.

Messi will close on the LaLiga record held by Manolo Sanchis for the most appearances at a single club in the division, but he will need more than one season for that - Messi is on 485, while ex-Real Madrid man Sanchis played 523 times.

Of course, Messi will be desperate for trophies this season after a barren 2019-20, and winning two will see him draw level with Ryan Giggs when it comes to titles won with the same club. Giggs won 36 with Manchester United.

But how about this for a feat: if Messi gets 10 goals this season - and let's face it, there's a good chance - he will set a new record for goals scored for the same club in official competitions. The current best is 643, set by a former Santos forward known as Pele.

THE PROBLEMS HE FACES

After the friendly win over Gimnastic, Koeman made it clear he plans to deviate from Barca's traditional 4-3-3 to a 4-2-3-1 that will, hopefully, get the best out of their midfielders. Such a system would presumably see Messi stationed as the number 10, behind a central striker.

Perhaps that's no bad thing: Messi, as a false nine under Pep Guardiola, played the most games (219) and scored the most goals (211) of his career in all competitions. His role under successor Tito Vilanova was similar and yielded 60 goals in 50 games, giving him a career-best average of 1.2 goals per game.

His most prolific season - 2011-12, the last under Guardiola - saw Messi record an astonishing 73 goals and 29 assists, leading to his calendar-year record of 79 goals in 2012. Again, that was from a central position in the attack, albeit one in a team filled with exceptional players. A shift back to the middle could suit him.

The trouble is that Messi is increasingly having to do all this himself. The supporting cast has dwindled in quality since 2015 and his most productive relationships are behind him.

Luis Suarez (47) has the most assists for Messi at Barca and completed his switch to Atletico Madrid this week. To continue a recent theme, his great friend expressed displeasure with the board over the matter. The top five Messi assisters after Suarez have all long left the club: Dani Alves (42), Andres Iniesta (37), Xavi (31), Pedro (25) and Neymar (22). The next on the list is Jordi Alba (21), whose own spot in Koeman's team is not entirely certain.

He has never looked entirely compatible with Antoine Griezmann, Ansu Fati is still a raw talent in many respects, and the squad will take time to adjust to any new formation, not to mention new arrivals in Miralem Pjanic and, perhaps, Memphis Depay. What's more, the embarrassment of last season's final few weeks will be fresh in the players' minds and the unrest from the boardroom downwards will never be far from the headlines.

When it comes to carrying this team, Messi has rarely looked so alone.