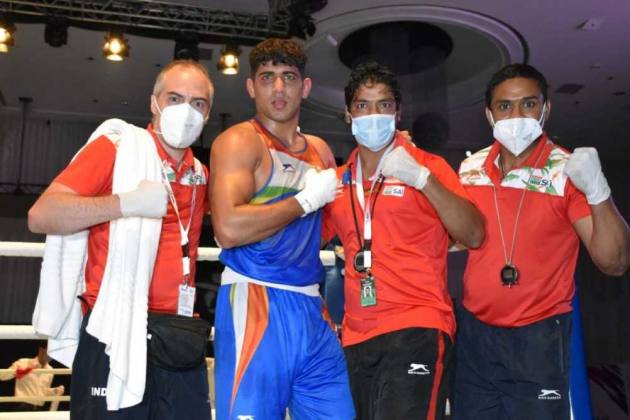 India’s moment on the final night of the Asian Boxing Championships came from Sanjeet, who managed to defeat 5-time Asian Championships medallist and Rio Olympic silver medallist Vassiliy Levit of Kazakhstan, in 91kg to win gold in Dubai on Monday.  (Sports News)

India's protest against defending champion Amit Panghal's 2-3 loss in the 52kg category finals was rejected by the jury.
Panghal lost 2-3 to Uzbekistan's Shakhobidin Zoirov, his third loss in a major event.

"The Boxing Federation of India tweeted that it is contesting the second round being awarded India has contested the R2 decision of the spilt verdict  2-3 and surprise loss of @Boxerpanghal in the finals of ASBC Asian Elite Boxing Championships in Dubai against reigning World & @Olympics champion S Zoirov," the BFI tweeted.

The protest lodged by Indian Team had not been accepted by the Jury Commission and @Boxerpanghal ends his ASBC #AsianEliteBoxingChampionships campaign with a ð¥ medal ðð» https://t.co/AjcrPRnISA

The federation later updated the tweet to say that the "protest lodged by Indian Team had not been accepted by the Jury Commission."

Earlier in the tournament, Indian boxer Sakshi Choudhary (54kg) had lost her final spot after her rival, top-seeded Kazakh Dina Zholaman successfully challenged the narrow victory that the two-time youth world champion had clinched in the last-four stage.

The bout review system was introduced by the International Boxing Association (AIBA) in 2019.

On Sunday, Indian women's boxing team finished with one gold, three silver and six bronze medals in Dubai. Overall, this has been India's best showing at the Asian boxing championships. India's previous best haul was 13 medals (2 gold, 4 silver and 7 bronze) in the 2019 edition.

Monday's final clash between Panghal vs Shakhobidin is like a Tokyo Olympics dress rehearsal.

Shakhobidin is the defending world and Olympic champion and now has a 3-0 win-loss record against Panghal. The Indian had earlier lost in the 2019 world championships and more recently at the Governor's Cup in Russia.

Olympic-bound defending champion Pooja Rani (75kg) was the lone Indian to clinch a gold, while Mary Kom settled for silver along with Lalbuatsaihi (64kg) and Anupama (+81kg).

That was the last fight of the night. India has finished with one gold (Sanjeet) and two silver Shiva Thapa (64kg) and Amit Panghal (52kg).

9:53 PM IST: 2nd ROUND: Vassiliy Levit was trying to make a comeback but Sanjeet is holding good. Sanjeet lands a combination as he backs away. Over to third and final round.

9:50 PM IST: FIRST ROUND: Sanjeet has managed to land few good punches on  Vassiliy Levit. Good round for Indian

9:45 PM IST:The protest lodged by Indian Team has not been accepted by the jury commission and Amit Panghal has to settle for silver.

The protest lodged by Indian Team had not been accepted by the Jury Commission and @Boxerpanghal ends his ASBC #AsianEliteBoxingChampionships campaign with a ð¥ medal ðð» https://t.co/AjcrPRnISA

9:43 PM IST: Up next third Indian in fray in the 91 kg final: Vassiliy Levit of Kazakhstan vs Sanjeet of India in Blue

9:35 PM IST: Tokyo-bound Ruzmetov Dilshodbek under pressure from Meysam Gheshlaghi.  The Iranian has managed to surprise Uzbek. Over to final round

9:33 PM IST: Tokyo-bound Ruzmetov Dilshodbek has dominated the round. He has  managed to find the target easily against Meysam Gheshlaghi, Second round coming up

9:18 PM IST: Both the boxers have been looking for an opening. Amankul has landed a solid punch on Jafarov. this one is also proving to be a close fight. Amankul has made a comeback in 2nd round with good punches in the last minute. Over to last round

9:04 PM IST: Up next 69 kg final: Top seed Baturov Bobo-Usmon (UZB) vs 2nd seed Ablaikhan Zhussupov (KAZ) in Blue. Both the boxers have qualified for Tokyo.

8:48 PM IST: Over to  2nd ROUND: 64 kg final bout between Shiva Thapa (India) in Red vs second seed Baatarsukh Chinzorig (Mangolia). Both boxers are evenly matched and its close. Over to third and final round.

8:43 PM IST: FIRST ROUND: Shiva and Baatarsukh are evenly matched and have started cautiously. Shiva is moving fast to move inside Baatarsukh who is quick on his feet evading.  Over to second round.

8:31 PM IST: Tsendbaatar is all over Daniyal and dominated the first round. Daniyal attacked more  in the second round trying to make a comeback. Over to the final round.

8:23 PM IST: Next up is 60 kg final with top seed Erdenebat Tsendbaatar (Mangolia) up against Daniyal Shahbakhsh (Iran) in blue

8:04 PM IST:  THIRD ROUND: Top seed Amit Panghal of India has lost to 2nd seed Zoirov Shakhobidin of Uzbekistan via a split decision. Panghal lost 2-3 against  the reigning World and Olympic champion Zoirov. This is third loss for Panghal to Zoirov ahead of the Tokyo Olympics

8:00 PM IST: 2nd ROUND: Amir has again started well and landed a left hand, while Zoirov is trying to get past Amit's defense. Amit is looking good moving inside Zoirov's defense time and again. Amit was in attacking mode all through the second round. It close and over to third and final round now.

7:55 PM IST: FIRST ROUND: Amit has started well and managed to land few punches. Zoirov has made a comeback with a few punches finding their target. Both boxers are equally matched.

7:44 PM IST: Honours even in the second round. Mirzakhmedov was looking for a way past Sabit's defense, who is equal to the challenge. Both boxers will be happy with 2nd round. Over to final round.

7:39 PM IST: First round sees 18-year-old Sabit start aggressively, but  Mirzakhmedov came back and started to find his target.  Mirzakhmedov after being on back foot at the start, has managed to finish the first round strong.

7:33 PM IST:  In the first of the 10 finals, Uzbekistan's Mirzakhmedov Nodirjon (red) is up against Daniyal Sabit of Kazakhstan in 49kg category