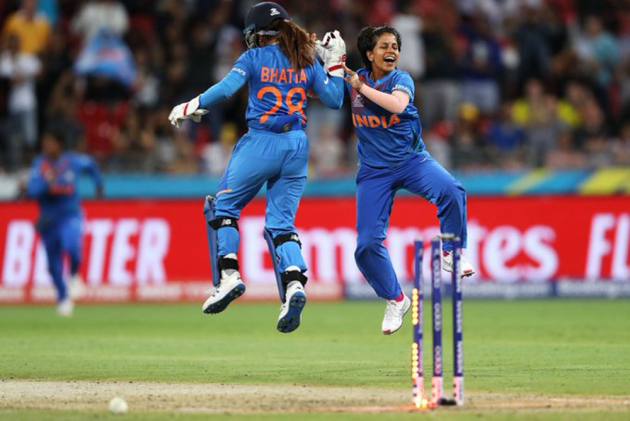 India staged a comeback in the opener of the ICC T20 Cricket World Cup against Australia, with a brilliant bowling performance. The hosts put in a good bowling display, restricting India for 132/4. Poonam Yadav led India's bowling wrapping up the Aussies for 115/all out, Follow here highlights of Australia (AUS) vs India (IND).

16:43 hrs IST: OUT!!!!!! One run completed. Strano sends Pandey's delivery in front of deep extra cover. They look for two, but Strano falls short. Rodrigues rushes in and sends a throw.

16:35 hrs IST: OUT!!!! Sharma sends a good delivery. Gardner sends it to deep wicket, and tries a second. Jemimah goes for the ball from  the outfield and sends it to Sharma, who tips the bails off at the non-striker's end.

16:31 hrs IST: OUT!!!! EXCELLENT WORK BY BHATIA!! Pandey sends a full delivery and wide of off. Sutherland misses it, and Bhatia collects it and whips the bails off.

16:09 hrs IST: OUT!!!! Another wrong'un by Yadav. Perrt steps out, but the ball goes straight to the leg stump.

16:08 hrs IST: OUT!!!! Yadav sends a wrong'un. Haynes gets an outside edge, and it goes straight to Bhatia.

15:47 hrs IST: OUT!!!!! EXCELLENT DELIVERY BY GAYAKWAD!! She tossed it up beautifully, and got a thin edge off Lanning and Bhatia took a nice catch.

15:33 hrs IST: OUT!!!!! It was a length ball by Pandey. Mooney sliced a cut shot straight to backward point for Gayakwad.

15:31 hrs IST: No run. Sharma tosses it up. Healy mistimes her drive to mid off.

15:13 hrs IST: No run. It was tossed up outside leg by Sharma. Mooney tries to sweep it but misses. Appeal for lbw denied.

14:56 hrs IST: One run. Kimmince sends a hard length once. Krishnamurthy splices it to long-on.

14:54 hrs IST: No run. It was full on middle by Jonassen. Sharma sends it straight to cover.

14:45 hrs IST: One run. Straight delivery by Jonassen. Krishnamurthy sends it between long-on and deep midwicket.

14:40 hrs IST: OUT!!!!! LBW!!! Kimmince sends a full straight delivery from over the wicket. Jemimah tries to flick it but doesn't make any contact. It goes straight to the front pad, and the review supports the umpire's decision.

14:27 hrs IST: One run. It was a full delivery by Gardner, angling into middle and leg. Sharma sends it through the gap in front of square.

14:14 hrs IST: One run. It was a length delivery by Schutt. Sharma sends it to midwicket at the circle.

14:06 hrs IST: OUT!!!!!! Jonassen sends a beautiful delivery, which drifts in. Kaur goes down the pitch and attempts a wild swing, and misses it. Healy gets lucky, she is on her knee, and bounces onto the stumps. She hadn't touched it with her gloves.

13:58 hrs IST: OUT!!!!! It was a short length ball by Perry. Verma hits it flat on the circle and Sutherland catches it.

13:49 hrs IST: OUT!!! Jonassen sent it flat and straight towards Mandhana, who tried to sweep it, but it hit her on the back leg flush infront of off.

13:43 hrs IST: SIX!! Verma lofts Strano's delivery over long-on. EXCELLENT!!! IT WENT HIGH OVER LONG OFF AND OVER THE ROPE.

12:26 hrs IST: The teams have walked in for the pre-match formalities.

13:23 hrs IST: Meanwhile, Harmanpreet Kaur said, "I definitely wanted to bowl but the toss is not in your hands so we just want to play good cricket. We are playing three spinners. We are getting a lot of support from all India supporters."

13:18 hrs IST: After the toss, Aussie captain Meg Lanning said, "We're not sure about the conditions so we want bowl first. Potentially some weather around but nothing too major. Molly Strano comes straight into the team so hopefully she can do well."

13:04 hrs IST: Australia win the toss and captain Meg Lanning opts to field first. Can India post a big total for the Aussies?

12:56 hrs IST: Ahead of the match, India captain Harmanpreet Kaur stated that all her players need to step up the mark against the defending champions. "If you want to do well as a team, you need to come up together and do well for the side,” she said.

“Through past tournaments, we have learnt that you cannot depend on just one or two players to win the game for you.

"If you want to win a big tournament like the World Cup, you have to come up as a team and that's what we're looking to do.

"Young players are mentally very fresh, they don't know what type of pressure they have to face.

12:25 hrs IST: Good afternoon everyone and welcome to Outlook's live coverage of the ICC Women's T20 World Cup opener between Australia vs India. Both sides will be aiming for a win.

The Harmanpreet Kaur-led side have been pretty inconsistent lately, like in the recently held tri-series in Australia, where they reached the final. India won and lost a game against England and Australia, before losing to the Aussies in the final. Australia have won the T20 World Cup a record four times, out of its six editions.

Star batsman Smriti Mandhana has already revealed that India will need to work on its middle and lower-order, in order to put better displays and also to edge past Australia, England. Unlike the past, they can't repeat a middle order collapse in the tournament.

Also, all eyes will be on 16-year-old Shafali Verma, who will be hoping to give India a good start in the World Cup matches. A lot is also expected from captain Kaur, who also needs to become more consistent with her performances.

In the bowling department, India doesn't have much to worry about. The team consists of quality bowlers, especially spinners. Pace bowler Shikha Pandey will need to lead her team's attack.

"As an opening bowler, I’m obviously thinking about the early breakthroughs and that doesn’t change. In the first six, we are trying to take wickets and then it’s about containing the batters before coming back and bowling the best you can in the death overs," said Pandey, India's fifth-highest wicket-taker in T20s.

"I would say 150 is now a par score in a T20 game, so the first six overs batters actually get a lot of freedom and try to hit as many runs as possible," she added.

India head coach WV Raman said, "Since (2018 World T20) then there has been a lot of improvement, in terms of fitness, agility on the field and their approach to batting."

Australia will be favourties in the tournament opener, having players like Ellyse Perry and Meg Lanning.

Their batting order is the best in the tournament, but their inexperience in a young bowling attack could pose problems for the team.