New Zealand thrashed Sri Lanka by 10 wickets in their opening match of the ICC World Cup 2019 at Cardiff on Saturday. Catch highlights of New Zealand vs Sri Lanka here 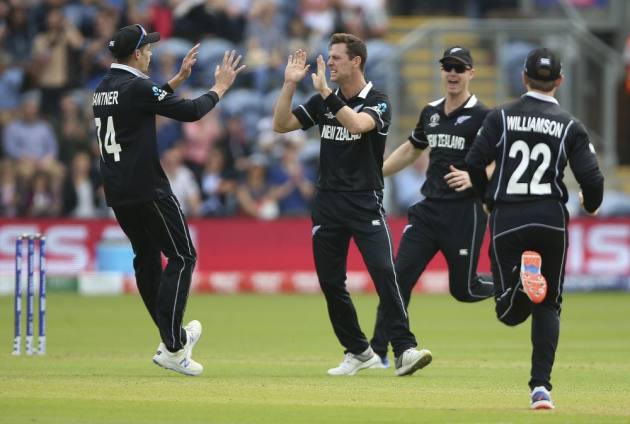 New Zealand registered a comprehensive 10-wicket win over Sri Lanka in their opening match of the 2019 Cricket World Cup at Cardiff on Saturday. After being asked to bat first, Sri Lanka lost wickets at regular intervals and were bowled out for 136 in 29.2 overs. Matt Henry and Lockie Ferguson took three wickets each. In reply, the Kiwis rode on half-centuries from Martin Guptill (73*) and Colin Munro (58*) to complete the formalities with 203 balls remaining. Get highlights of New Zealand vs Sri Lanka here (SCORECARD | AFG vs AUS | POINTS TABLE | FULL SCHEDULE)

Matt Henry, Man of the Match: "It was good to get a green surface and we tried to make the most of it. We don't get many one day wickets like that, but it's nice when you get one. It is just important you go through your processes and try a few things, not try and worry too much as it is a long tournament. On a surface like that we were trying the full length and get them forward, with them trying to hit us off our length. You make sure you keep coming in with your plans and hope that the plans would work. Makes a massive difference when the fielders do their job; they were brilliant today and it means a lot for our bowling attack."

18:53 hrs IST: Both openers are nearing their fifties. New Zealand are 91/0 after 12 overs. Has been a terrific day for them.

18:02 hrs IST: New Zealand have got off to a steady start. Not a big to chase. Shouldn't be a worry for them.

17:26 hrs IST: OUT! That's it. Sri Lanka have been bundled out for 136 in 29.2 overs. Malinga the last wicket to fall. Karunaratne remains unbeaten on 52. Solid bowling performance from New Zealand. We'll be back in a few minutes.

17:15 hrs IST: Another disappointing batting day at the World Cup. Don't think they will be too many scores of 350-plus.

16:59 hrs IST: OUT! Neesham gets the wicket of Udana. Stupendous over from the New Zealander, just two runs and a wicket. Sri Lanka are 115/8 after 25 overs. Suranga Lakmal comes to the crease.

16:54 hrs IST: OUT! Perera looks to clear the region between long-on and mid-wicket but doesn't get the timing and Boult takes a neat catch. First wicket for Santner. Isuru Udana comes to the crease.

16:49 hrs IST: SIX! Half-volley from Neesham, Perera makes space and smashes it over cow corner for a maximum. Sri Lanka are 111/6 after 23 overs. Santner again.

16:44 hrs IST: Caught and bowled chance missed by Santner. It was hit hard from Perera but the New Zealand spinner would be disappointed to not hang on to it. Sri Lanka cross the 100-run mark in 22 overs.

16:33 hrs IST: Karunaratne finding it difficult to rotate the strike. Sri Lanka can't afford to lose another wicket here. They are 84/6 after 19 overs. Jimmy Neesham comes into the attack.

16:21 hrs IST: Karunaratne moves into 20s with a boundary off the last ball. Sri Lanka are 68/6 after 16 overs. De Grandhomme to continue.

16:17 hrs IST: OUT! Sri Lanka lose their sixth wicket. Length ball from Ferguson, Mendis looks to play it through the leg-side but gets an outside edge and Neesham takes a good catch at gully. Thisara Perera comes to the crease.

16:10 hrs IST: OUT! Brilliant delivery from De Grandhomme. Seams away, Mathews looks to defend but gets an edge and Tom Latham completes an easy catch behind stumps. Jeevan Mendis comes to the crease. Time for drinks!

16:07 hrs IST: This is superb stuff from the Kiwis. Just 12 runs have come from the last six overs. Colin de Grandhomme comes into the attack. Can he give his side another breakthrough?

15:57 hrs IST: OUT! Now Ferguson joins the party, removes Dhananjaya. Incoming delivery, strikes the back pad - in front of middle-stump. Angelo Mathews comes to the crease. Sri Lanka are 53/4 after 12 overs.

15:42 hrs IST: And Henry misses! Dhananjaya gets off the mark with a boundary. Still an excellent over from the New Zealand paceman. Two wickets and just four runs. Sri Lanka are 50/3 after 9 overs.

15:39 hrs IST: OUT! Henry on a hattrick. A first-ball duck for Mendis. Slight away movement, Mendis looks to defend but gets an edge and Martin Guptill does the rest at first slip. Dhananjaya de Silva comes to the crease.

15:27 hrs IST: Consecutive boundaries for Perera. Looks in top form. Moves into 20s and will be aiming for a big score. Sri Lanka are 35/1 after 6 overs. Boult proving to be expensive.

15:22 hrs IST: FOUR! Full and straight from Henry and Perera hits it past the non-striker. Easy pickings. Sri Lanka are 25/1 after 5 overs. Boult again.

15:18 hrs IST: EDGED and FOUR! Karunaratne looks to drive but finds the thick edge and it races away in the gap between third slip and point. Good over for Sri Lanka, eight runs off it. They are 20/1 after 4 overs.

15:14 hrs IST: FOUR! Half-volley from Henry and Perera slashes it cover for his first boundary of the day. Decent over from Henry despite the boundary, five runs off it. Sri Lanka are 12/1 after 3 overs.

15:07 hrs IST: Some shape for Boult. Tests the Sri Lanka captain with a couple of outswingers.

15:05 hrs IST: Great start from Henry. Sri Lanka are 4/1 after the first over. Trent Boult comes into the attack.

15:03 hrs IST: OUT! Henry gets hit for a boundary off his first ball, but gets rid of Thirimanne (LBW - Inswinger) the very next delivery. Kusal Perera is in at No. 3. Won't be easy for him if the New Zealander continues to get purchase off the track.

14:32 hrs IST: New Zealand have won the toss and have opted to field

14:20 hrs IST: We'll have the toss in 10 minutes. Meanwhile, this is what Sarfaraz Ahmed, the Pakistan captain, had to say after his side's seven-wicket loss to West Indies at Trent Bridge, Nottingham on Friday.

14:18 hrs IST: New Zealand's two warm-up matches were very much a mixed bag as they got to grips with India in a big six-wicket win, only to be thrashed by 91 runs by West Indies, an apparent rival for a top-four finish.

13:57 hrs IST: Hello and welcome to Outlook's live coverage of the third match of the 2019 Cricket World Cup between New Zealand and Sri Lanka.

The Kiwis start favourites against Sri Lanka, a side that has slumped to ninth in the ODI rankings.

New Zealand have Williamson, Martin Guptill and Ross Taylor who are in great form. In the bowling department, they have Tim Southee and Trent Boult, who showed what they are capable of in the previous World Cup.

For Sri Lanka, Dimuth Karunaratne, who has returned to the ODI fold after four years, has been handed the responsibility of lifting a side that has lost eight of its last nine ODIs.

But Sri Lanka have a good World Cup record, with one title, two runners-up finishes and one semi-final appearance.