India were 62/2 in reply to Australia's first innings total of 369. Catch highlights of Day 2 of the 4th Test AUS vs IND in Brisbane 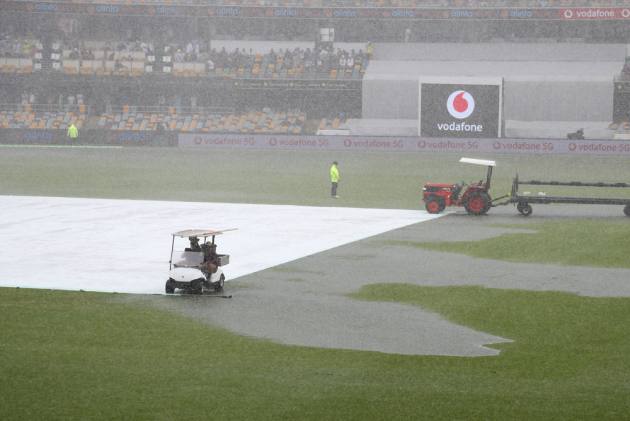 India were 62 for two in reply to Australia's first innings total of 369 at Stumps on a rain-curtailed second day of fourth and final Test at the Gabba, Brisbane on Saturday. India lost young Shubhman Gill (7) before vice-captain Rohit Sharma (44) threw his wicket before the Tea break. The entire third session was lost as the wet outfield did not allow play to resume. Cheteshwar Pujara (8) and skipper Ajinkya Rahane (2) will resume India's response on Sunday morning. India are still trailing by 307 runs. The hosts added 95 runs to their overnight total in the extended opening session after resuming at 274 for five. Catch highlights of Australia vs India, Day 2 from Brisbane. (Day 2 REPORT | SCORECARD | NEWS)

11:24 AM IST: Encouraging news. Covers are coming off. There will be an inspection, of course.

Rain around, as is lightning ðÂÂÂÂÂÂÂÂÂÂÂÂÂÂÂÂÂÂÂÂÂÂÂÂÂÂÂÂÂÂ

Hopefully not too long a delay at the Gabba #AUSvIND pic.twitter.com/XRYPUyzmS7

10:55 AM IST: It's downpour! Rain delayed the start of play in the post-tea session. Thundershowers were predicted, but there could still be some play later in the day. Rain is also expected on the fourth and fifth days.

10: 20 AM IST: India were 62 for two in reply to Australia's first innings total of 369 at Tea. India lost out of form Shubhman Gill (7) before vice-captain Rohit Sharma (44) threw his wicket. Cheteshwar Pujara (8) and skipper Ajinkya Rahane (2) were at the crease when the break was taken. The hosts added 95 runs to their overnight total in the extended opening session after resuming at 274 for five.

10:08 AM IST: Josh Hazlewood continued, and a single off the fifth ball as Ajinkya Rahane opened his account. It's also the first run after Rohit Sharma's departure. IND - 61/2 (25).

10:03 AM IST: Nathan Lyon on with his fifth over and another maiden, to Cheteshwar Pujara.

9:59 AM IST: Josh Hazlewood continued, and another maiden, to Ajinkya Rahane. Third maiden over on the trot.

9:56 AM IST: Nathan Lyon on with his fourth over. And his first maiden, to Cheteshwar Pujara. 31 runs and one wicket in the last ten overs.

9:52 AM IST: Ajinkya Rahane joined Cheteshar Pujara in the centre. Josh Hazlewood returned for his 6th over. And a maiden to India captain. IND - 60/2 (21).

9:18 AM IST: Pat Cummins on with his fourth over. Cheteshwar Pujara played the first ball past mid-off and ran three, then another three as Rohit Sharma played the next ball to the same region. And edge off the last ball landing short in front of second slip. Pujara survived. IND - 32/1 (13).

8:57 AM IST: Pat Cummins on with his second over. Rohit Sharma picked the fuller delivery and steered it down the third man for his first boundary. That happened off the third ball. IND - 21/1 (9).

8:41 AM IST: Josh Hazlewood on with his third over, and another maiden, to Rohit Sharma.

8:37 AM IST: Mitchell Starc continued. Shubman Gill played the first ball straight for a couple, then hit the next one for a four, first of the innings, through covers. In control, and punched. IND - 11/0 (5).

8:32 AM IST: Josh Hazlewood continued. First run for Shubman Gill as the India opener played the first ball to fine leg. Dots, then a couple to square leg. Three from the over. IND - 5/0 (4).

8:27 AM IST: Mitchell Starc continued, and a maiden to Rohit Sharma.

8:23 AM IST: Josh Hazlewood shared the new ball. A maiden to Shubman Gill.

8:19 AM IST: Mitchell Starc with the new ball. Four dots, then a front-foot drive through the covers for a double as Rohit Sharma opened India's account. AUS - 2/0 (1).

8:14 AM IST: Players are out for the post-lunch session.

7:43 AM IST: Australia's first innings folded for 369 on the second day of the fourth and final Test against India at The Gabba on Friday. The lunch break was taken after the fall of the last Australian wicket in the extended opening session. The hosts had resumed at 274 for five. The 39-run partnership for the ninth wicket between Nathan Lyon (24) and Mitchell Starc (20 not out) hurt India. Pacer Shardul Thakur (3/94) and debutant off-spinner Washington Sundar (3/89) shared four of the five wickets that fell today. Marnus Labuschagne had struck a century on the opening day for Australia.

T Natarajan's 3/78 are the second-best figures for an Indian left-arm seamer in debut, after RP Singh's 4/89 against Pakistan at Faisalabad (2005/06)

And with that Lunch!

7:34 AM IST: Another over for Washington Sundar in the extended play before Lunch. A maiden to Mitchell Starc.

7:31 AM IST: Mohammed Siraj continued. Josh Hazlewood played a cracking cover drive for a four off the fourth ball. Then, another flowing cover drive by the left-hander. Nine runs from the over. AUS - 369/9 (114).

7:24 AM IST: Mohammed Siraj on with his 27th over. Another chance went abegging for India. Mitchell Starc got a top edge off the fourth ball, and Mayank Agarwal lunged himself for the catch at mid-on. Failed. AUS - 357/9 (112).

7:19 AM IST: Washington Sundar continued with his 29th over, and maiden to Josh Hazlewood. 43 runs and two wickets in the last ten overs.

6:54 AM IST: Washington Sundar continued. Nathan Lyon swept the first ball for a four, then another sweep shot, this time hitting Prithvi Shaw at short leg. Nasty. A couple off the fourth. ASU - 338/8 (105).

6:25 AM IST: Bowling change. Spin on. Washington Sundar on. Lucky Cameron Green. Bounce and turn and a catch falling short of first slip. Two balls later, Tim Paine reached his fifty with a single to cover. He took 102 balls. AUS - 311/5 (99).

6:07 AM IST: Mohammed Siraj continued, and a couple of chances. First, an in cutter almost had the top of Tim Paine's off-stump. That happened off the second ball, then Siraj, following up, missed the stumps at the striker's end as Paine kept his backfoot hanging. AUS - 299/5 (95).

5:54 AM IST: T Natarajan on with his 23rd over. And another maiden. Good one, probing Cameron Green with good length deliveries and some movement. And solid defence from the Aussie greenhorn. 41 runs have been scored in the last ten overs.

5:41 AM IST: T Natarajan continued, and a no-ball. And Rishabh Pant asked for physio. Hit on the hand while going for errant delivery.

5:34 AM IST: T Natarajan resumed the proceedings. One action-filled over to start the day. Cameron Green beaten, then the Aussie all-rounder hit fours off the fourth and sixth balls. Driven. AUS - 282/5 (88).

5:28 AM IST: Cameron Green and Tim Paine already added 61 runs in 128 balls for the sixth wicket, and the new ball is old six overs. And there are predictions for thunderstorms later in the day.

Players are there for the second day's play.

5: 07 AM IST: Despite the euphoria of finding an XI fit enough to take on the Aussies at 'Fort Gabba', India have a massive task at hand. Australia will target a minimum of 350, that's considering India striking early with the new ball. Then, up against a fiery pace attack, India will need to bat out of their skin.

5:00 AM IST: Unfortunately, Mohammed Siraj was racially abused again. A report in the 'Sydney Morning Herald' quoted a spectator as saying that a section of the crowd at the Gabba targetted the India pacer. "The guys behind me have been calling - shouting - both Washington and Siraj grubs," a spectator named Kate was quoted as saying by the newspaper. "It started targeted at Siraj and it was a chant similar to the SCG one (in which fans sung to the tune of Que Sera, Sera but substituted the lyrics with Que Shiraz, Shiraz).

4:49 AM IST: Washington Sundar, prior to his unexpected Test debut on Friday against Australia, had bowled over 285 overs in first-class cricket and after dismissing Steve Smith, the Tamil Nadu off-spinner is ready to bowl 50 in an innings if that's what the side wants of him. Here's what he said: "I have always felt that my skills are very good with red ball. I have bowled a lot of overs in first class cricket and first division league in Chennai as well. I was just waiting for this opportunity and last couple of months, we were here, I did get to bowl a lot of overs and improve upon my skills."

4:37 AM IST: India's resilience cannot be questioned but they need to find out the reason behind the spate of injuries, said former Adam Gilchrist.

"A few have been inflicted by the Australian pace attack, but the soft tissue injuries – they'll need to assess why they came about and whether it was something in or out of their control," he added.

4:22 AM IST: India's new-look bowling attack did well in Brisbane on Friday. With better catching, the tourists could have been on top by close of Day 1. Labuschagne rode two chances en route to his fifth Test hundred. While David Warner (1) edged a beauty from Mohammed Siraj, almost every top-order Australian batsmen failed to convert good starts.

Labuschagne too top-edged a pull off Natarajan (2 for 63) to be pouched by wicketkeeper Rishabh Pant, shortly after Matthew Wade departed to the same bowler for 45.

Like Wade, Steve Smith was guilty of not capitalising on a start when he became Washington Sundar's maiden Test wicket on 36, although Cameron Green (28 not out) and under-fire captain Tim Paine (38 not out) got the hosts to 274 for five wickets at stumps with the four-match series all square at 1-1.