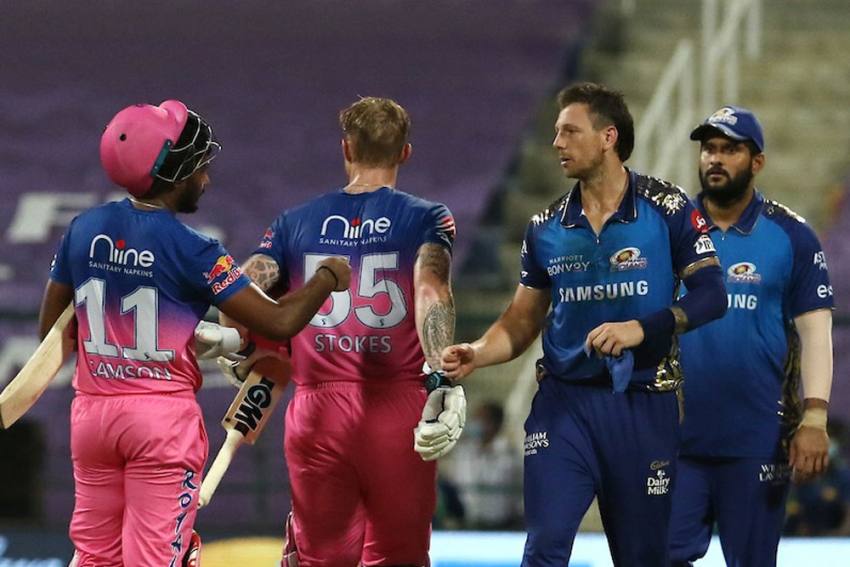 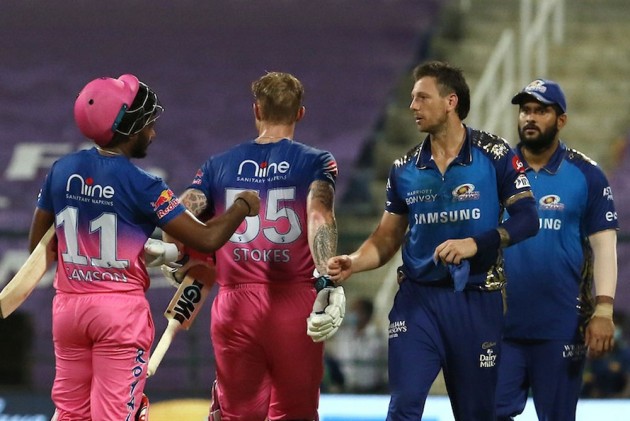 A stunning win for Rajasthan Royals (RR) with massive repercussions. The inaugural champions not only kept themselves alive in the Indian Premier League (IPL) 2020 with an eight-wicket win over defending champs Mumbai Indians (MI) in Abu Dhabi, UAE but also eliminated Chennai Super Kings (CSK). Chasing a big 196-run target, RR rode on a century-stand between Ben Stokes and Sanju Samson to canter home with eight balls to spare against possibly the best bowling attack in the tournament. Stokes, who joined the team late, hit an unbeaten ton (107 off 60, 14 fours, and three sixes) while Samson helped himself to 54 not out off 31 balls. The win, fifth in 12, helped RR to sixth place with 10 points, but MI remained top of the table with 14 points. This was MI's fourth defeat in 11 outings. CSK remained at the bottom with eight points from 12 matches. (SCORECARD | POINTS TABLE | FULL SCHEDULE)

Here's what man of the match Stokes said after the match, as told to official broadcasters, "Sour and sweet to be honest - it took so long to get one for the team. We needed a result from today, so - it's a good victory."

Winning skipper Steve Smith was very happy, understandably so. He said, "Very pleased, that's what we're crying for, use the experience, take the game deep and that's what both Stokes and Samson did."

For Kieron Pollard, whose winning-run as a skipper, spanning CPL and IPL, came to an end, it was "tough luck."

"I thought they batted well. Hardik [Pandya] brought us straight back in the game with that knock at the halfway stage... Our bowlers tried, but well played to the opposition. He (Hardik) went out and scored 60 off 21, an innings like that and we end up on the losing side, that's just tough luck," Pollard said.

11:00 PM IST: Jasprit Bumrah on with his final over. Ben Stokes took a double, to fine leg. Another double, this time to backward point. A single to move into the nineties. Another single, and Stokes let go a well-directed bouncer. A wild swing got top-edge for a four behind the wicket. 10 runs from the over. Bumrah's figures: 0/38. Rajasthan 182/2 (17); Ben Stokes 95, Sanju Samson 52.

10:52 PM IST: Trent Boult returned for his third over. A double to start the over as a lucky Ben Stokes played over extra-over. Another double, then four to third man. Another double, and a four to fine leg. A single to keep the strike. 15 runs from the over. The stand with Sanju Samson now worth 128(68). Rajasthan 172/2 (16); Ben Stokes 86, Sanju Samson 51.

10:38 PM IST: James Pattinson returned for his third over. Ben Stokes hits the first ball for a four, to extra-cover. A double then a dot. A single, then a big six from the bat of Sanju Samson, over long-off. A wide, and Samson guided the last ball to empty the third man for a four. 18 runs from the over. His stand with Stokes now worth 81 in 50. Rajasthan 125/2 (13); Ben Stokes 63, Sanju Samson 29.

10:31 PM IST: Rahul Chahar on with his second over. A dot, then two singles. Another, then a dot and a single. Sanju Samson almost hit the ball into his own wickets while trying a paddle shot. Lucky. Rajasthan 107/2 (12); Ben Stokes 56, Sanju Samson 19.

10:27 PM IST: Jasprit Bumrah returned for his second over. Good battle against Ben Stokes. One wide and three singles. In fact, Bumrah had an LBW shout against Stokes off the last ball. Not reviewed though. Five runs from the over. Rajasthan 104/2 (11); Ben Stokes 54, Sanju Samson 18.

10:22 PM IST: Krunal Pandya on with his second over. After a good start, conceding three singles off four balls, leaked two fours off the last two - both hit by Ben Stokes. Also fifty for Rajasthan all-rounder in 28 balls. Rajasthan 99/2 (10); Ben Stokes 53, Sanju Samson 16.

10:18 PM IST: Kieron Pollard returned continued. Sanju Samson hit the first ball for six over, followed by a double and a single. A dot, then a wide. A dot, and another wide. Another single to end the 13-run over. Rajasthan 88/2 (9); Ben Stokes 45, Sanju Samson 14.

10:10 PM IST: Double bowling change. Rahul Chahar, leg-spinner, on. A wide to start his spell, then a slog sweep for six by Ben Stokes. It was followed by a reverse sweep four, almost hitting Rohit Sharma who was keeping a close eye from the sidelines. Four singles and 15 runs from the over. Well, it turned out that six was Stokes' first maximum this season. Rajasthan 75/2 (8); Ben Stokes 44, Sanju Samson 4.

9:57 PM IST: James Pattinson continued. Ben Stokes took a double, and a single. Steve Smith beaten for pace, then an inside edge to the wicket. Smith made 11 off 8. New man Sanju Samson in a mix-up with Ben Stokes. No harm done, though. Four runs and wicket from the over. Rajasthan 45/2 (5); Ben Stokes 20, Sanju Samson 0.

9:50 PM IST: Bowling change. Jasprit Bumrah on. And a four to start his spell with Steve Smith punching through cover. Kieron Pollard did everything to stop, but. A dot, then two singles. Smith flicked the fifth ball for a six. A dot to end the 12-run over. Rajasthan 41/1 (4); Ben Stokes 17, Steve Smith 11.

9:11 PM IST: WICKET! Jofra Archer with his last over. Saurabh Tiwary out off the first ball, caught by Ben Stokes at long on. He made 34 off 25. Krunal Pandya joined younger brother Hardik. Brilliant over. Just three, and a wicket. Mumbai - 168/5 (19); Hardik Pandya 34, Krunal Pandya 2.

8:40 PM IST: WICKETS! Shreyas Gopal had Suryakumar Yadav (40 off 26) caught at long-off by Ben Stokes. New man Kieron Pollard almost perished, going for a six, with a leaping Stokes just missing the ball at the boundary. But Gopal got his man. Bowled. Pollard out for 6 off 4. Two wickets and seven runs from the over.  Mumbai - 101/4 (14); Saurabh Tiwary 4.

8:28 PM IST: WICKET! Stunning catch from Jofra Archer to send Ishan Kishan back. Unbelievable effort, so thus the reactions from Rajasthan Royals players. Kishan (37 off 36) picked the short ball from Kartik Tyagi, the fourth ball, but found a leaping Archer at third man. Saurabh Tiwary is the new man. Two runs and a wicket from the over. Mumbai - 91/2 (11); Suryakumar Yadav 39, Saurabh Tiwary 1.

8:06 PM IST: Ankit Rajpoot on with his third over. And he took some beating. Suryakumar Yadav played the craziest ramp shot for a six over short fine leg off the second ball, then Ishan Kishan hit a maximum off the fifth, over the same zone. 14 from it. Powerplay over. Mumbai - 59/1; Ishan Kishan 26, Suryakumar Yadav 19.

8:01 PM IST: Bowling change. Kartik Tyagi, right-arm pacer, on. Three singles in four balls, then an inside edge four off Suryakumar Yadav. Then, a four to fine leg. 11 runs from the over. Mumbai - 45/1; Ishan Kishan 19, Suryakumar Yadav 12.

7:56 PM IST: Ankit Rajpoot continued. A huge LBW shout off the first ball. Pitched outside the leg, and a close call for Ishan Kishan. Then, four leg byes, and another LBW shout. Busy over. A single, with some scampering. Then two wides. A single, followed by a four to third man. Brilliant touch from Ishan Kishan. A dot than a single to end the over. 13 from it. Mumbai - 34/1; Ishan Kishan 17, Suryakumar Yadav 3.

7:50 PM IST: Jofra Archer operating at his best. Four dots to Ishant Kishan and a single to backward point. Suryakumar Yadav blocked the last ball. One run from the over. Mumbai - 21/1; Ishan Kishan 11, Suryakumar Yadav 2.

7:46 PM IST: A brief stoppage. Ishan Kishan down with pain. Got hit on the pad. Jofra Archer!

7:31 PM IST: Jofra Archer with the new ball. Ishan Kishan to face the first ball, and Quinton de Kock is his opening partner.

7:28 PM IST: As things stand now, Mumbai are top of the table with 14 points from seven wins in 10 outings. Rajasthan just moved to the bottom after Chennai's win over Bangalore.

Mumbai Indians were without an injured Rohit Sharma in their last game against CSK. Kieron Pollard led a team that has looked complete in all aspects. Trent Boult and Jasprit Bumrah polished off the CSK top order and a reckless MS Dhoni gifted his wicket to leg-spinner Rahul Chahar. Then opener Ishan Kishan and Quinton de Kock made shortwork of a 115-run target and MI won with more than seven overs to spare.

It remains to be seen how MI batsmen handle the lethal pace of Jofra Archer. In the first-leg clash between RR and MI, Archer took 1 for 34 in his four overs as Mumbai won by a whopping 57 runs. The England pacer's ability to move the ball with pace makes him one of the most difficult bowlers to face even on sluggish pitches in the UAE.

Sunday's clash will be a match between RR's top order batsmen and MI's well-rounded bowling attack. RR coach Andrew McDonald is still not sure how his team, mainly the batsmen, will turn up against Mumbai Indians.

"It’s hard for us to really identify one area where we went wrong. Clearly, we haven't been at our best consistently and ultimately that's what it's about in these tournaments. It's such an even tournament and the challenge is to bring your best out in every game and unfortunately, through the course of the tournament, we haven't done that and have allowed teams to come back in games we probably should've won. Our destiny is probably in other teams' hands now and as for us we need to keep believing, our challenge is seven wins and we'll try to give our best to achieve that," said McDonald.