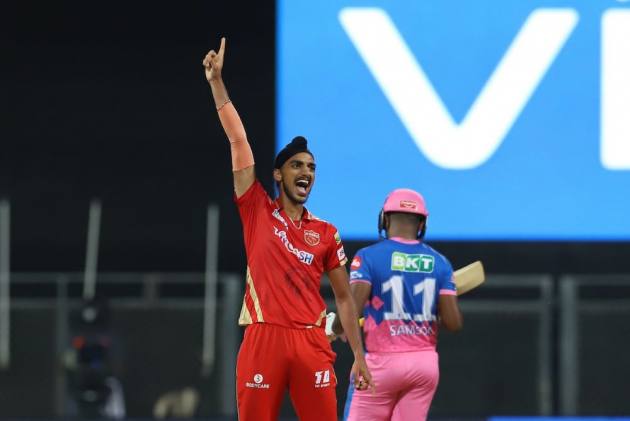 Sanju Samson's magnificent 119 went in vain as Punjab Kings defeated Rajasthan Royals by four runs in their IPL match in Mumbai's Wankhede Stadium on Monday night. Put in to bat, Punjab Kings made 221 for six against Rajasthan Royals. K L Rahul top-scored with 91 off 40 balls while Deepak Hooda smashed 64 off 28.  While Rahul smashed seven fours and five sixes in his knock, Hooda, playing his first game since the last IPL, plundered six maximums and four boundaries. This after Chris Gayle scored a breezy 28-ball 40 to setup a platform for Punjab Kings huge total. IPL debutant Chetan Sakariya was the pick of the Rajasthan bowlers with three wickets for 31 runs in four overs.  Chasing the big target, Rajasthan Royals could only manage 217 for 7 in their 20 overs with Samson top-scoring. His 119 of 63 balls was studded with 12 fours and seven sixes. Brief Scores: Punjab Kings: 221/6 in 20 overs (K L Rahul 91, Deepak Hooda 64; Chetan Sakariya 3/31);  RR: 217 for 7 in 20 overs (Sanju Samson 119; Arshdeep Singh 3/35, Mohammed Shami 2/33). Catch the highlights and updates of RR vs PBKS match here.