Sunrisers Hyderabad to play Delhi Capitals in virtual semifinal on Sunday. Winners will play Mumbai Indians in final on Nov 10 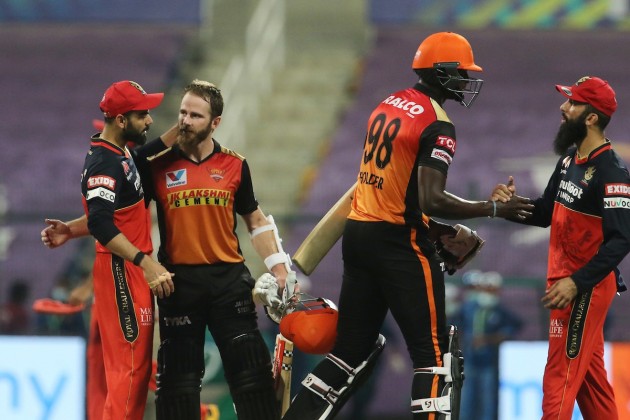 Holder first led SRH's brilliant bowling effort with figures of 3 for 25 to restrict batting-heavy RCB to a modest 131 for seven before he and Williamson steered SRH past the target with two balls to spare. Williamson (50 not out off 44) played a composed knock and together with Holder (24 nout off 20) shared 65 runs for the unbroken fifth wicket to take SRH home after early hiccups. SRH play Delhi Capitals in the Qualifier 2 on Sunday for a place in the final while the RCB were knocked out of the tournament.

SRH didn't have the best of starts losing Sreevats Goswami early. Skipper David Warner (17) didn't last long, edging one to AB de Villiers behind the stumps off Mohammed Siraj. Manish Pandey (24) and Priyam Garg (7) too failed to rise to the occasion as they departed in quick succession.
But then, Williamson and Holder joined hands and played sensibly. They initially kept SRH in the hunt before accelerating towards the end to take their side home.
Brief Scores:
Royal Challengers Bangalore: 131 for 7 in 20 overs (AB de Villiers 56, Aaron Finch 32; Jason Holder 3/25, T Natarajan 2/33).
Sunrisers Hyderabad: 132 for 4 in 19.4 overs (Kane Williamson 50 not out, Jason Holder 24 not out; Mohammed Siraj 2/28).

11:30 PM IST: What a masterclass from Kane (Williamson), he's done it for years for New Zealand. With the class of batting line up they had, you obviously knew there was something in that wicket with the new ball holding. You had to wait for the ball to be overpitched. The spinners bowled quite slow- Warner after the match

11:24 PM IST: If you talk about the first innings, I don't think we had enough on the board already. The position we got ourselves in the second half, probably better execution...a game of margins. We just didn't have enough runs on the board in my opinion- Kohli after the match.

11:00 PM IST:  Siraj into the attack amd Holder slashes it over vacant third man and now SRH are in the match. Williamson now picks up 3 runs of a Ramp shot.

10:53 PM IST:  Saini into the attack; Devdutt takes a catch but can't complete it as momentum takes him over the rope.  Devdutt tosses it in but can't complete the ctach but saves 5 runs; Kane Williamson gets it for a FOUR!!!!. Opens the face of the bat and it runs down through third man.

10:43 PM IST:  Shivam Dube comes into the attack. FOUR!!!! Kane Williamson is now getting into the act. Cracks it through covers. No chance for the fielders in the deep.

10:33 PM IST:  Sundar comes to the attack. A SIX!!!! after such a long time. Sundar bowls a length and Williamso slogs it over midwicket. First boundary after 25 balls. Next ball Kane picks up three runs.

10:23 PM IST:  Chahal into the attack now. Gets a WICKET!!! few quiet overs and SRH were looking for runs. Chahal loops it and gives it air. Priyam Garg c Zampa b Chahal

9:58 PM IST:  Mohd Siraj into the attack but David Warner cracks 1st FOUR slashed through covers, Next width and cut hard by Warner. But now RCB appeal but given not out by onfield umpire. RCB review Warner has nicked one to keeper as per thrid umpire . Warner is not happy, few words exchanged. RCB wanted him and get it. It will be a controversial decision and something that can have a bearing on the match

9:48  PM IST:  Washington Sundar into the attack. Manish Pandey gets cracking a FOUR!! of the 1st ball. Pandey and Kohli exchanged a few words and since then Pandey has been finding boundaries. 3rd ball goes for a FOUR!!! past mid-off. 12 runs of the over.

9:41  PM IST:  Nitin Saini into the attack and Manish Pandey again attacks the first ball. Shivam Duba dives but misses the catch and ball rolls on for a FOUR!!! Manish now cracks the last ball for a FOUR!!!!! through covers

9:37 PM IST:  Siraj now has the responsibility to keep things tidy and maintain the pressure. Gets an inside egde of Manish Pandey on to the pads, half appeals from RCB. Manish Pandey gets a short ball and pulls it for a SIX!!!.

9:33 PM IST:  Nitin Saini into the attack. Manish Pandey comes in for SRH. RCB will want to create more pressure. It's David Warner's wicket they will be after. Saini bowls a good over

9:27 PM IST:  RCB are looking for quick wickets and Siraj gets one. What a Wicket, AB de Villiers almost fumbled it but managed to catch on to it.

9:14 PM IST:  Everthing that could go wrong, went wrong for RCB. Virat Kohli made a brave move to open the innings but once SRH had him cheaply, it was all downhil for them. AB de Villiers put up a fight but in the end 132-run target will not put many teams under pressure in T20.

Holder (3/25) after the match "It has been been a good tournament, coming in as a replacement and putting up my hand when the team's been under pressure. I still believe there's a long way to go for me, personally. "

9:00 PM IST:  WICKET!!!! Natarajan now gets BIG wicket AB de Villiers is clean bowled. Nails in a yorker and is goes past AB defenses and knocks out the middle stump. It's all over for RCB

8:52 PM IST:  Sandeep Sharma into the attack. He bowls another economical over. Just 7 runs of it

8:47 PM IST:  Holder now has figures of 3-0-20-3 and has accounted for Virat Kohli, Devdutt Padikkal and now Dube; AB de Villiers gets to his half-century witha four through long-on area.

8:43 PM IST:  Holder now into the attack. Dube isn't timing the ball well and Holder is also not giving any gifts. Two good yorkers nailed by Holder. The bowler now has three wickets for just 15 runs. Dube was looking to work this to leg side but gets a leading edge taken at mid-off by Warner.

8:35 PM IST:  Natrajan into the attack. It's all down to AB de Villiers for RCB. SRH need his wicket because he can be dangerous towards the end.

8:28 PM IST:  Rashid into the attack and RCB have collapsed. It's down to Ab de Villiers. Shivam Dube has no idea what Khan is bowling has been beaten all ends up at least twice.

8:23 PM IST:  AB de Villers gets an edge for a FOUR!!! and then Nadee, oversteps to give a free hit to RCB who will love it. RCB are starving for runs and a free hit is a gift. But wait, RCB have collapsed. Ali has been run out of a free hit. Ali hit straight to Rashid at extra cover and is caught short of crease. Remember you can get run out of free hit.

8:15 PM IST:  Rashid Khan will be looking for a wicket.  Finch finally connects one in the middle of bat. A slog sweep sends the ball flying out of the park for a SIX!!!!.

8:10 PM IST:  Nadeem is into another tidy over. Sunrisers are managing to create pressure, no easy runs for RCB on offer. Finch and Ab de Villiers are left knocking the ball for singles.

8:07 PM IST:  Rashid Khan into the attack and will be looking to create more pressure on RCB. He started well bowling a tight line giving nothing away to RCB batsmen. 2 runs of the over

8:03 PM IST: Shahbaz Nadeem into the attack. And RCB are into a nice partnership with AB de Villiers and Aaron Finch are looking comfortable in the middle; Nadeem gives away 5 singles

7:59 PM IST: Natrajan into the attack and RCB are now into the last over of powerplay. What an anti-climazx for them. Their skipper waked out to take the match head on but ended up putting the team in trouble. Finch meanwhile gets a FOUR!! of the last ball

7:55 PM IST: Sandeep Sharma into the attack. what a good time to bowl, opposition is in disarray. SRH bowlers are not giving away anything. All down to AB de Villiers and Finch to dig RCB out of this hole. AB gets the last ball for a FOUR!!! much needed boundary for Bangalore.

7:47 PM IST:  Holder into the attack. and RCB get the first boundary of the match. WICKET!!!! Padikkal gone. Holder has given another breakthrough. Padikkal was under pressure and was looking for a release shot. Short and tries to pull Garg times his jump well to complete the catch

7:44 PM IST: Sandeep into the attack. and Sunrisers are ensuring that they don't waste the advantage. RCB under pressure, Finch hasn't been in form but now needs to shoulder responsibility. Devdutt might be in form but is a green horn when it comes to pressure game. Sandeep is mixing it well knuckle balls, slower ball and no width.

7:35 PM IST: Holder to bowl the 2nd over and gets the big wicket, Kohli out for 6 the experiment hasn't worked for RCB. Goswami took a good catch diving to his left.

7:33 PM IST: Kohli has taken the strike and is up against his nemesis Sandeep Sharma.  Sandeep is getting a bit of swing going. Good over 5 runs of the over

7:25 PM IST: Virat Kohli and in-form Devdutt Padikkal to open for RCB who are playing with four changes, while SRH are also without in-form Saha and Sandeep Sharma to open the bowling

7:00 PM IST: SRH Win the toss and will bowl first against RCB. Chasing teams have won 7 matches of the 8 matches held here.

6:40 PM IST: SRH are coming into this match with a win, while RCB are on a four match losing streak. Both teams have inspirational leaders- Virat Kohli and David Warner. The two will be competing against each other again by the end of this month again as India start tour of Australia.

6:35 PM IST: It's eliminator time. RCB or SRH one of them  will be knocked out. The winner will face Delhi Capitals. DC were pulverised yesterday night by MI. It left Ricky Ponting livid.