Catch highlights and cricket scores of the 2nd T20 between Zimbabwe and Pakistan from Harare Sports Club. Zimbabwe won by 19 runs 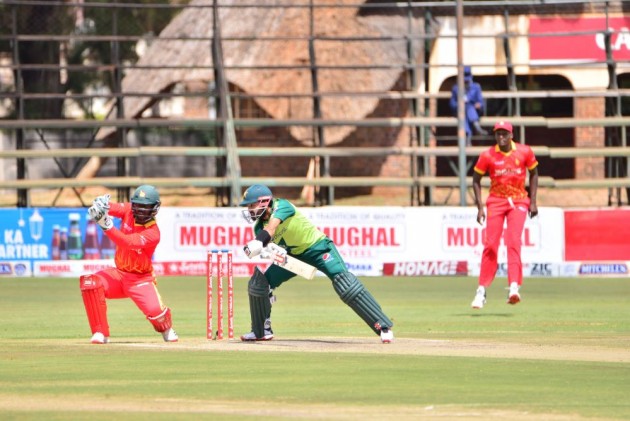 Despite skipper Babar Azam's patient 41 off 45, Pakistan fell short of Zimbabwe's 118 by 19 runs in the second T20 International at Harare Sports Club on Friday. Meaning, the three-match T20I series will be decided on Sunday. Azam won the toss and opted to bowl first. Led by Mohammad Hasnain (2/19), Pakistan restricted Zimbabwe to 118/9. Danish Aziz also claimed a brace even as four other Pakistan bowlers got a wicket apiece. For Zimbabwe, opener Tinashe Kamunhukamwe top-scored with 40-ball 34. The next highest was 14-ball 18 from wicketkeeper-batsman, Regis Chakabva. Pakistan, who won the first match by 11 runs in the first match, looked set for an easy win with openers Mohammad Rizwan and Azam showing their usual calm. But the visitors collapsed. Danish Aziz hit 22 off 24 balls before getting run out, and soon it was all over. Pakistan could manage only 99 in 19.5 overs. And triggering the collapse was Luke Jongwe, who claimed a four-wicket haul (4/18). Ryan Burl took two wickets. Catch highlights and cricket scores of the 2nd T20 match between Zimbabwe and Pakistan from Harare Sports Club here:

2:04 PM IST: Pakistan have won the toss and opted to bat first.  Hosts Zimbabwe are without their skipper Sean Williams who misses this match due to illness. Brendan Taylor is the stand-in skipper for the hosts