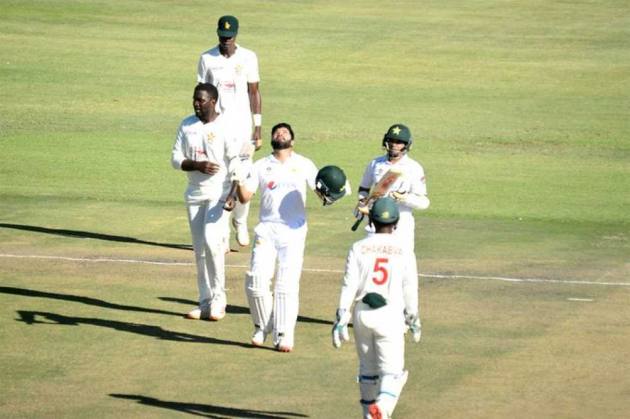 Abid Ali was batting on 118, while Azhar Ali scored 126 as Pakistan, aiming to extend their winning-run in Test cricket, ended the day on 268/4 against hosts Zimbabwe in the second and the last Test match of the series at Harare sports club on Friday. After Babar Azam opted to bat first, Pakistan lost their first wicket cheaply. Thereafter, Azhar Ali and Abid Ali shared a 236-run stand for the second wicket bailing Pakistan out of trouble and putting them on course to  a huge total.  Zimbabwe did manage to peg Pakistan back with three wickets in the last session. Blessing Muzarabani (3/41) and Richard Ngarava (1/35) being the main wicket-takers for the hosts. Catch the highlights and updates of the 2nd Test match between hosts Zimbabwe and Pakistan from Harare Sports Club here:

12:50 PM IST: So news from the middle is that Pakistan have won the toss and elected to bat first.
For Pakistan Tabish Khan is making his debut replacing Faheem Ashraf, while Zimbabwe, who are still without their skipper Sean Williams, have handed debut to Luke Jongwe