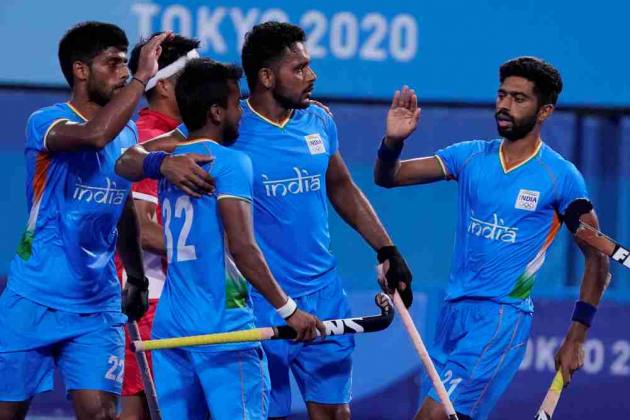 Sad end to a brilliant match for India. They traded blows with the world champions from Belgium in their men's hockey semi-final match at Tokyo Olympics. But the most successful team in Olympics ends up losing 2-5 after a poor fourth which witnessed the brilliance of Alexander Hendrickx (goals in 19th, 49th, 53rd minutes), and of course Belgium's game management. For the record, Hendrickx has so far scored an unimaginable 14 goals. For India, Harmanpreet Singh (7th) and Mandeep Singh (8th) scored. India will now play for the bronze medal while Belgium will hope to exorcise the ghost of the Rio Games. They lost to Argentina in the final five years ago. Get highlights India vs Belgium hockey match here:

8:53 AM IST: India managed to create eight chances, including five PCs while Belgium got 19 chances, of which 13 were PCs. India will face either Australia or Germany on Thursday in the bronze medal play-off.

In between, don't forget to read 'To The Point' on Naveen Patnaik and Indian hockey.

Countdown begins. And India are pushing for a goal. Dilpreet Singh gets a circle penetration but on the counter, Belgium hit another one. No goalkeeper. John-John Dohmen gets one of the easiest of goals.

And it's over for India.

India with 11 outfield players. No goalkeeper. Thomas Briels is down after getting hit by a cracker. Less than two minutes left. India face elimination.

Six minutes left and India win a long corner. But nothing from it. Belgium win back the possession and Cedric Charlier is running down the clock. Free kick for India at their own half. Turn over and Belgium get another chance.

Ball hit the foot of the last man. And Sreejesh wasn't making that much move to cover the line and stroke for Belgium.

It's raining penalty corners. 14th for Belgium. It may even turn out to be a penalty stroke. being reviewed...

A series of mistakes from India as Belgium up the ante. And tenth PC as Florent Van Aubel forces Harmanpreet to committing a deliberate foul just outside the D. Then, another PC as Amit Rohidas' block is deemed a foul.

PR Sreejesh gives India a life with a stunning save against Alexander Hendrickx. But the danger is not over. Another PC.

Alexander Hendrickx to the fore! The maestro changes the angle and hits the target.

Then, another PC for Belgium. Amit Rohidas makes a stunning a forward rush to deny Alexander Hendrickx a clear sight. Another PC.

Good start to the final quarter for India. Free hit just outside the opponent D. Then a green card for India captain Manpreet Singh. India one man down, for two minutes. And PC number 7 for Belgium.

Indian women players are also watching the match. A good spell for Belgium with one minute left in the quarter. A circle penetration, then another. But India happy with deep defending. Risky business.

Clean tackle from Sumit to thwart a relentless Belgian attack. India still enjoying a majority of the possession, now 55%.

Free hit for India as Nilakanta forces an error from Belgium. But Hardik Singh commits a foul inside the Belgian D.

Harmanpreet Singh ready. Waiting for the injection from Hardik. A clean stop from Belgium.

A PC. First in the quarter and fifth for India. Belgium challenges the call. Sumit at the receiving at from a late tackle.

A tepid affair in the third quarter so far. But still have seven minutes. Meanwhile, Harmanpreet forced to use aerial clearance.

India keeping Belgian defence true to itself. Nilakanta manages to breach the line from the left, then Mandeep uses the right to create panic.

India soon win the possession back. But allow Belgium to make the first penetration of the quarter. Somehow, the Indian defence manages to thwart the attack.

30 minutes to decide the first finalists. Players are back for the third quarter.

India created seven chances and scored two while Belgium got a couple from 10. But India dominate the possession, 54 to 46.

Harmanpreet Singh drags it wide. And the scoreline remains 2-2 even as Belgium go for a late push.

India survive some anxious moments in the dying moments of the quarter. In fact, with 70 seconds left, India win a PC.

On the other end, India concede a PC. Surender Kumar footed. And it's a PC. Amit Rohidas takes a body blow to deny Alexander Hendrickx.

India lose the referral and they are fuming. Alexander Hendrickx was clearly pushing Mandeep. India will play the remainder of the match without the luxury of a referral.

Mandeep Singh again. He tries to link up with Dilpreet with a reverse shot. But the onrushing player late for the occasion. India asks for a PC. Alexander Hendrickx , the culprit, it seems. For pushing Mandeep.

Long corner for India to end a poor spell. Switching flanks. And on the right. Mandeep Singh sends in a cross. Another long corner. Circle entry, but Belgium thwart India's attack.

A mistake from Gurjant Singh in defence and PC for Belgium. Dangerous Alexander Hendrickx enters and he beats PR Sreejesh to his right. Stunning drag flag.

And India manage to keep the lead with a good defense. Manpreet Singh manages to infiltrate and brilliant goalkeeping from Vincent Vanasch. One of the referees asks Belgium players to keep it calm.

Rupinder Pal Singh leaves the defensive post for leaving first. Another PC for Belgium. Another one, third in the row.

Belgium in the ascendency. Win first PC of the quarter thanks to a Gurjeet Singh mistake.

Brilliant defending from India with Amit Rohidas doing the clean-up work to thwart.

End of the first quarter.

India win another PC. But Vincent Vanasch makes a good save to deny third goal.

Stunning play from India. Mandeep Singh produces a killer tomahawk to give India the lead.

Another PC for India. Harmanpreet Singh arrives and scores.

Free-hit for India inside their own half. Then, another free-hit as Amit Rohidas managing to hit the foot of a Belgium player.

India then takes a referral, asking for a dangerous ball. PC for India.

7:00 AM IST: Belgium, in whites, to start the proceedings.

6:56 AM IST: Players are ready for the match. National anthems... India's first.

6:50 AM IST: India, still the most successful side in Olympics, has a better head-to-head record, including four wins in the last five meetings. But the last time the two teams met in Olympics, Belgium defeated India 3-1.

In the quarters, India defeated Great Britain 3-1. Belgium got the better of Spain by the same margins for back-to-back semis.

On the cusp of creating history, India will be gunning for a victory on the back of their recent showing against Belgium. India have tasted success against Belgium in the FIH Hockey Pro League in 2020 where they beat the world champions 2-1 in their second game and after losing 3-2 in the first in Bhubaneswar.

In a 'Test' series before the FIH Pro League, India had beaten Belgium 5-1, 2-1 and 2-0 in 2019. At the Odisha Men's Hockey World Cup in Bhubaneswar in 2018, the Indian team had drawn 2-2 in their Pool C encounter against the Red Lions and had secured a 1-1 draw in the FIH Champions Trophy in Breda the same year where India won a silver medal.

"As far as Belgium is concerned, obviously they and Australia have been sharing the World No.1 spot for the last 18-24 months. So, in that sense, Belgium will be a very difficult opponent. But we have played them a fair bit in the past and have the experience of doing well against them too. So, we need to focus on the things that we can do against them and make sure that we are much more disciplined in defence and our structure is much better," said Manpreet.

Pool B winners Belgium were given a huge scare by a Spanish team that finished fourth in Pool A but were magnificent in the quarterfinals, holding a 1-0 lead before Belgium fought back to claim a 3-1 win. Tournament top scorer Alexander Hendrickx scored twice to take his personal tally at these Olympics to 11 goals in six games, moving him five goals clear of nearest rival, Blake Govers of Australia.

India’s dream of winning a first Olympic gold medal for 40 years moved a step closer to reality after battling to a 3-1 quarterfinal win against Great Britain.  India opened up a two-goal lead in the contest through superbly taken field goals from Dilpreet Singh and Gurjant Singh, with Great Britain guilty of some sloppy defending on both occasions to trail 2-0 going into half time.

Great Britain were the better team in the third quarter and Sam Ward pulled one back past the rock solid Indian goalkeeper PR Sreejesh. But Hardik Singh dealt the killer blow by firing into the bottom right corner to seal India’s big win.

Belgium have scored a whopping 29 goals in six matches, including nine each against South Africa and Canada in the group stage. The Red Lions have conceded just 10 goals, the least in the competition so far. In contrast, India have scored 18 goals and conceded 14 in their six matches.

8:26 AM IST: Fourth Quarter - India 2-3 Belgium
Six minutes left and India win a long corner. But nothing from it. Belgium win back the possession and Cedric Charlier is running down the clock. Free kick for India at their own hald. Turn over and Belgium get another chance.