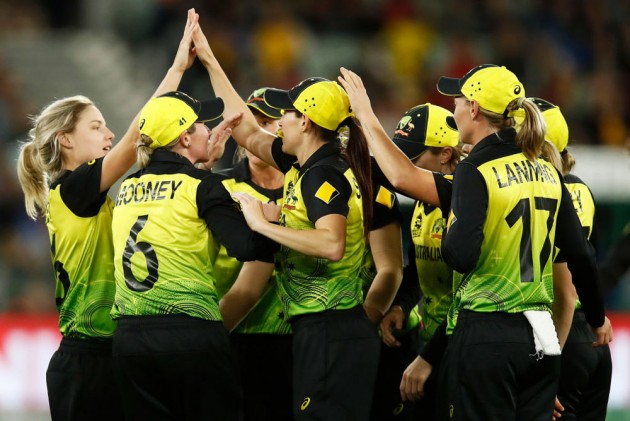 Australia defeated India by 85-runs to win the ICC Women's T20 Cricket World Cup for the fifth time in history, at Melbourne. After winning the toss, Australia registered 184 runs, setting a big target for India. The Aussie bowling department led by Jess Jonassen wrapped up India for 99 (all out) in 19.1 overs. Follow here highlights of India Women (IND) Vs Australia Women (AUS) here.

15:38 hrs IST: OUT!!!!! CAUGHTTT!!!! Schutt sends a good delivery. Yadav sends it to Gardner who runs in from the midwicket boundary.

15:33 hrs IST: OUT!!!! Jonassen sends a length delivery in middle stump. Yadav tries to drill it over mid-on, but toe-ends it to Mooney.

15:30 hrs IST: OUTT!!!! Length ball by Schutt at middle stump. Ghosh uses the high inside part of her bat. It floats in the leg side. Carey gets underneath it and grabs a simple catch.

15:29 hrs IST: Schutt sends a full slower delivery outside off. Pandey skews it outside off her bat, and Mooney catches it.

15:22 hrs IST: OUT!!! It was a short length ball by Carey. Deepti flat-bats it but has no power. Mooney takes a catch at long-on.

15:15 hrs IST: One run. It was full at middle stump by Carey. Sharma sends down to long-on.

15:04 hrs IST: OUT!! Jonassen takes an excellent catch. Kimmince sends up her delivery, a cutter. Krishnamurthy lofts off her drive. Jonassen back tracks from mid-off.

14:57 hrs IST: One run. Molineux tosses her delivery. Krishnamurthy sends it over mid-off.

14:52 hrs IST: No run!! Carey sends a shortish delivery from round the wicket. Deepti sends it straight to backward point.

14:47 hrs IST: One run. It was a quicker delivery outside off by Molineux. Krishnamurthy sends it to deep cover.

14:44 hrs IST: OUT!!! Jonassen tosses it up and Kaur slog sweeps it and gets a top edge, and it goes to square leg rope. Gardner is there and catches it!

14:30 hrs IST: OUT!!! Jonassen tosses it up on off. Mandhana mishits it and slices it for a simple catch at mid-off. Carey catches it.

Poor display by Rodrigues. She had just replaced Bhatia, who has left for some concussion tests.

13:59 hrs IST: 1 bye. It was a length delivery by Yadav on the corridor. Carey deflects it by mistake towards short third off the keeper's body.

13:53 hrs IST: OUT!!!! It was a short delivery outside off by Yadav. Haynes tries to pull, but gets a thick inside part of the bat and it goes to the leg stump.

13:48 hrs IST: OUT!!! GOOD DELIVERY BY SHARMA. AND EXCELLENT WICKETKEEPING! It was a length delivery pushed through flat outside off.

13:34 hrs IST: No run! Yadav sends a googly, which goes wide of off stump. Lanning steps out and defends it.

13:21 hrs IST: OUT!!! Yadav sends a slow ball. Healy miscues it and sends it to long on where its caught by Krishnamurthy.

13:18 hrs IST: SIX!! HATTRICK OF SIXES!!!! Pandey sends a full outside off delivery. Healy sends it over deep cover and over the fence!

13:12 hrs IST: FIFTY FOR HEALY!!!! SHE IS ON FIRE!!!! Not a good delivery by Radha. Healy lofts it down the ground and it goes straight to the sightscreen!

13:02 hrs IST: One run. Poonam tosses her ball around off. Mooney sends it down to long-off.

12:57 hrs IST: One run. Powerplay done. Gayakwad sends a short ball around off. Mooney sends it through extra cover.

12:47 hrs IST: FOUR!!!! Sharma floats her delivery down the leg side. Healy paddle sweeps it down to fine leg. Sharma has conceded 23 runs off 2 overs!

12:44 hrs IST: No run. Good fielding by Jemimah at cover-point. Shikha sends a good delivery, Healy is equal to it and hits it hard, but Jemimah stops it inside the ring with a dive.

12:22 hrs IST: Both teams walk onto the surface for the pre-match formalities.

12:13 hrs IST: "My mom's sitting somewhere in the stands. It's a pressure game and we also wanted to bat first. We are quite confident while chasing, hopefully the bowlers restrict them. We did some indoor practice. We are trying to staying together, because you are not getting games it tends to affect your focus. We want to treat this like any other game and give our best shot," said Harmanpreet Kaur.

12:10 hrs IST: After the toss, Australia captain Meg Lanning said, "We are going to have a bat, looks a good wicket. Crowd's amazing, looking forward to it. Every game has been close, it's been cut-throat, but we need to be at our best today. India are a great side, hopefully it's a great game. We are going in with the same team tonight."

12:02 hrs IST: Australia have won the toss, and opted to bat first.

11:26 hrs IST: Ahead of the final, India captain Kaur revealed that a forced eight-day break has affected India's preparations going into the Women's T20 World Cup final on Sunday but the team is ready to rise to occasion in front a record crowd at the MCG.

"We haven't been outdoors much and we didn't manage to play the important game against England," said Kaur on the eve of the final against record four-time champions Australia.

"We were all in touch and doing indoor training, but it doesn't give you full confidence because the surface is totally different. Everyone was in good touch and thinking what they can do for the team.

"We did get rest also because when you're playing for a long time, you need a break. No-one wanted to take rest, everyone was so keen, everyone was on the ground and ready to deal with the situation."

11:00 hrs IST: Good morning everyone and welcome to Outlook's live coverage of the Women's World T20 final between India Vs Australia. Can Harmanpreet Kaur lead her side to the elusive ICC title? Or will Australia do the usual again?

India are currently unbeaten in this tournament, having already edged past Australia in the opener. Kaur and her team sealed a berth in the final, after having been unbeaten in Group A and experiencing their semifinal clash against England get washed out.

Shafali Verma will be the visiting side's main weapon. The 16-year-old's swashbuckling batting displays has been key to India's victory, along with the bowling department. Sadly, other key batsmen like Kaur and Smriti Mandhana have failed to click yet. Today is their day of reckoning.

Also, the middle order needs to be more consistent, considering the shaky confidence of top order members other than Verma. India need to manage the pressure, unlike in the 2017 ODI World Cup final, when they lost to England and also in the 2018 World T20 semis.

India also hasn't yet crossed the 150-run mark in any of the matches in the tournament.

Leg spinner Poonam Yadav will be hoping to continue with her brilliant form, and is currently the tournament's highest wicket-taker with Aussie Megan Schutt (nine wickets). Pace bowler Shikha Pandey will also need to continue with her consistency, having been crucial to India's strategy.

Ahead of the match, captain Harmanpreet said, "One thing, we have to keep in mind Sunday is a fresh day, a fresh start. We have to start from ball one. We've done quite well in the league games. Both teams are under pressure and both are capable of winning."

Led by Meg Lanning, Australia are the heavyweights in this match and also have the home crowd.

The Aussies have faced injury issues in the competition, having lost Elysse Perry and Tayla Vaeminck. Perry was crucial to the team's plans. They edged past South Africa in the semifinals to book a final berth.

"We're not coming just to put on a good show. We're coming here to win and that's the attitude we're going in with. It's been a long time coming and the build-up to the game is something I've not experienced before. It will be the biggest moment of my career," said Meg Lanning.

More than 75,000 tickets have already been sold for the final and the figure could go as high as 90,000, unprecedented in women's cricket.