Mohammed Shami's three-wicket haul helped India (IND) restrict Bangladesh (BAN) to 150 on Day 1 of the first Test in Indore. At stumps, the hosts were 86/1, with Cheteshwar Pujara and Mayank Agarwal unbeaten on 43 and 37 respectively. Get here highlights of IND v BAN, 1st Test, Day 1 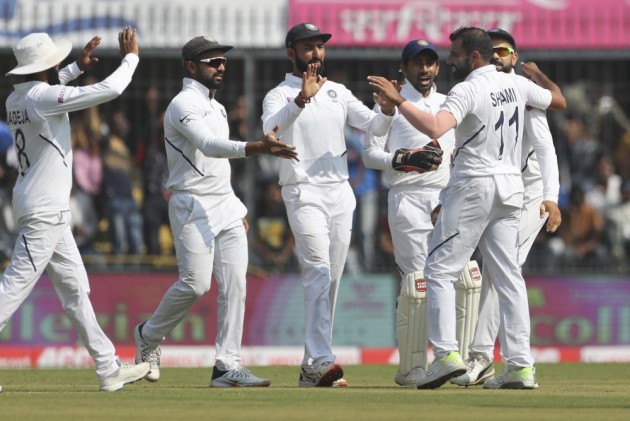 Mohammad Shami - "I came to bowl one change, so I had to think of the conditions and situation. Thought process is to bowl lines that are as tight as possible. I've been using the width of the crease for the last two years. When you take a wicket for India, you feel so well. Our unit, either bowlers or batsmen, when they do well, we all enjoy."

17:02 hrs IST: That'll be stumps. India 86/1, trail by 64 runs. Pujara 43*, Agarwal 37*. The day belonged to the bowlers, especially India's pacers. Shami took three, while Umesh, Ashwin and Ishant shared six. Jadeja couldn't take a wicket, but ensured a run-out went to his name. In response, Agarwal and Pujara helped India to a commanding position. Can the hosts bat the whole of Day 2?

16:31 hrs IST: FOUR! Length ball from Taijul, angling in, Agarwal bends his knees before executing the late cut past the man at first slip for a boundary. India are 66/1. Pujara 35*, Agarwal 25*. Around nine overs to go

16:16 hrs IST: FOUR! Flighted delivery from Taijul, Pujara comes down the track and whips this to the midwicket boundary. Costly over from Taijul, 12 off it. India are 47/1. Pujara 26*, Agarwal 15*

15:38 hrs IST: OUT! Edged and gone! Rohit (6) looks to drive, a hint of late swing means he gets a nick and the keeper, Liton, does the rest. Didn't lean into the drive. Jayed does it for his side. Cheteshwar Pujara comes to the crease. India are 16/1

15:19 hrs IST: Ebadat continues. And a maiden. India 6/0 after three overs with Agarwal doing all the scoring. Rohit yet to open his account.

15:09 hrs IST: FOUR! Overpitched from Ebadat, Agarwal gets into position early and powers it through the covers for a boundary. India are 5/0

14:54 hrs IST: OUT! Knocks him over! Full ball from Umesh, rips past Ebadat's defence and crashes into the off stump. Bangladesh have been bundled out for 150. Three wickets for Shami. Two each for Ishant, Umesh and Ashwin. Despite four dropped chances in the slips, the hosts are in the box seat. Bat once and bat big now?

14:50 hrs IST: Taijul (1) back to the pavilion. Jadeja fires a throw from deep fine leg. Taijul dives but Saha breaks the bails in time. Ebadat Hossain comes to the crease. Bangladesh are 148/9

14:40 hrs IST: And Shami misses. Taijul negotiates a back of length delivery. Still an outstanding over from the Indian. A maiden! Bangladesh are 142/8

Here's Shami now. Can he get a hat-trick?

14:35 hrs IST: OUT! Full from Ishant, nips away a bit, Liton (21) is drawn forward, gets an outside edge and Kohli dives forward to take a good, low catch at slip. By the way, Ishant has been warned again for stepping in the danger zone, his second and final warning. Abu Jayed comes to the crease. Bangladesh are 142/8

14:11 hrs IST: WICKETS! Shami on a hat-trick. But tea break for now. Gets Rahim (43) with an inswinging delivery and Mehidy Hasan (0) LBW. When Shami bowls like this, it's difficult to decipher him. Oh! Mehidy should've reviewed because replays show that the ball would've missed leg stump. What a session for India! Bangladesh 140/7. We'll be back in 20 minutes!

13:34 hrs IST: OUT! Mahmudullah (10) goes way across to sweep and misses a straight delivery that crashes into the stumps. Second wicket for Ashwin. Around 3-4 catches dropped by India but still Bangladesh are five down. Liton Das comes to the crease. Rahim holds the key for The Tigers.

13:25 hrs IST: Superb over from Umesh. Still getting movement. Get a feeling something is going to happen here. Bangladesh are 108/4. Rahim 36*, Mahmudullah 7*

UPDATE - Shami is hobbling off the ground. Doesn't seem to be in much trouble though. Shubman Gill comes in as the substitute.

13:15 hrs IST: FOUR! Short delivery from Umesh, and Mahmudullah plays an uppish pull over square leg for his first boundary. Bangladesh are 106/4. Rahim 34*, Mahmudullah 7*. Drinks are on the field now! The most experienced pair in the opposition camp is out there. Ideal opportunity for Bangladesh to force their way back in the game.

13:00 hrs IST: OUT! Drifts back in, Mominul leaves thinking this will turn but it doesn't and shatters the off stump. A well-deserved scalp for Ashwin and the Bangladesh skipper departs for 37. Mahmudullah comes to the crease.

12:55 hrs IST: Ishant gets the first official warning for venturing into the danger area. Runs coming fast now, Bangladesh playing with a lot of maturity. Getting through the new ball and taking advantage of the softer ball. The tourists are 99/3. Mominul 37*, Rahim 34*

12:42 hrs IST: SIX! Tossed up from Ashwin, Rahim comes down the track and lifts it over the bowler's head for a maximum. Shot! Hits a four off the next ball - a cut to the backward point boundary. Expensive over from Ashwin, 10 off it. Bangladesh are 88/3. Mominul 30*, Rahim 30*

12:21 hrs IST: DROPPED! Rahane puts down a catch at slip, a reprieve for Rahim! Plays for the turn but this skids through and feathers the outside edge. Awkward height for Rahane but this should have been taken. Big opportunity missed. Still a fine over from the offspinner, just two off it. Bangladesh are 66/3. Mominul 23*, Rahim 15*

12:12 hrs IST: Welcome back, everyone! Shami to start proceedings after lunch

Meanwhile, Rafael Nadal produced a stunning comeback to boost his progression chances at the ATP Finals, saving a match point before sealing a captivating victory over Daniil Medvedev. The Russian looked destined to gain a measure of vengeance for his loss to Nadal in this year's US Open final when he broke twice and took a 5-1 lead in the third set at the O2 Arena in London. But things changed soon after that. READ HERE

11:32 hrs IST: That's lunch. Bangladesh 63/3 after 26 overs. Mominul 22*, Rahim 14*. Definitely India's session as the teams walk back to the pavilion. All the three pacers looked brilliant in the pre-lunch session, but this Bangladesh pair can cause some serious damage if they manage to stay at the crease for the next 10-15 overs. We'll be back in 40 minutes. Stay tuned!

11:14 hrs IST: FOUR! Length delivery from Umesh, angling away, Mominul opens the bat face and plays this past the slip cordon for a boundary. Costly over from the Indian, nine off it. Bangladesh are 47/3. Mominul 18*, Rahim 2*

11:00 hrs IST: OUT! Full ball from Shami, on middle stump, and Mithun (13) comes forward to defend, but the ball swings away late and hits his pad. Shami appeals and the umpire raises his finger. Mithun chats with Mominul but chooses not to review. Bangladesh (31/3) are in all sorts of trouble. Mushfiqur Rahim comes to the crease

10:51 hrs IST: Only five runs off the last 30 deliveries. Bangladesh are 22/2. Mithun 6*, Mominul 3*. One more wicket now and Bangladesh would be under severe pressure.

10:34 hrs IST: Time for drinks. Bangladesh are 19/2. Mominul 3*, Mithun 3*. First hour has completely belonged to India. There has been a significant movement. Both Ishant and Umesh bowled really well. They beat the outside edge a lot of times before finally taking a wicket each. Can Bangladesh stage a recovery?

10:25 hrs IST: Decent over from Shami, four off it. Bangladesh are 17/2. Mominul 3*, Mithun 1*. Looks like the India pace bowlers are in for extended spells. With Ishant, Umesh and Shami all doing well, who will be dropped when Bumrah returns? Guess a good headache to have.

BIG NUMBER - 23 successive innings for Kayes without a fifty-plus score. Time for Bangladesh to try a new opener?

10:05 hrs IST: OUT! Too full from Ishant, Shadman (6) looks to drive it away from the body. There's no feet movement and so it ends up being a poke, enough to get the edge. Simple chance for Saha. Bangladesh in early trouble. Mohammad Mithun comes to the crease. Bangladesh are 12/2

10:00 hrs IST: OUT! Edged and taken! This had to happen. Length ball from Umesh, creates that natural angle across, Kayes (6) pushes at it, but gets an outside edge and Rahane, the India vice-captain, takes a good catch at third slip. Umesh deserved this! Mominul Haque comes to the crease. Bangladesh are 12/1

09:55 hrs IST: FOUR! Full delivery from Ishant, swinging away, Shadman looks to drive but gets an outside edge that goes past gully for a boundary. Not that convincing but the batsman would take it. Bangladesh are 8/0. Shadman 6*, Kayes 2*

UPDATE - Umpire Joel Wilson is ill, Rod Tucker standing in for him.

09:49 hrs IST: A thick inside edge to fine leg and first runs of the day for Kayes and Bangladesh. Shadman too gets off the mark with a single towards wide of cover. The visitors are 2/0

09:40 hrs IST: Magnificent over from Umesh. Right on the money. Almost had Kayes. Mayank Agarwal, standing at short leg, was a tad deep. Bangladesh are 0/0 after 2 overs.

09:35 hrs IST: Nice and tidy start from Ishant. Conventional swing early on. Could be an exciting day for the India pace bowlers. Bangladesh are 0/0. Umesh Yadav comes into the attack. He had a wonderful series against South Africa (11 wickets in two Tests).

09:30 hrs IST: Time for live action. Kayes and Shadman are at the crease. Ishant to open the attack. Let's play!

09:01 hrs IST: Bangladesh have won the toss and have opted to bat

PITCH REPORT: "Runs on offer," says Sunil Gavaskar. "It's a little grassy but there will still be some carry for the bowlers. There's some deceptive dampness due to the onset of winter, but as the days go on, we won't see much of it. I think India will still want to bat first."

08:35 hrs IST: The Holkar Stadium has only hosted one Test match so far, during New Zealand's tour of India in 2016. India won by 321 runs, with daddy centuries from Virat Kohli and Ajinkya Rahane setting up a big first-innings total and R Ashwin picking up career-best match figures of 13/140 to bag the Player of the Match award.

08:23 hrs IST: Hello and welcome to Outlook's live coverage of the first Test between India and Bangladesh.