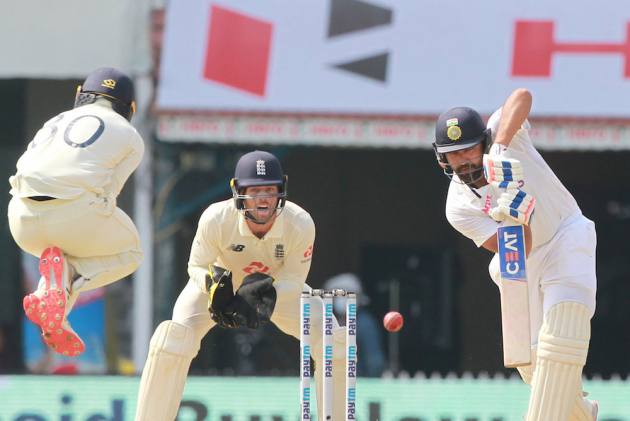 Rohit Sharma hit a timely century, his seventh and first against England, as India fought back after losing three early wickets on Day 1 of the second Test in Chennai. His 161 off 231 was 11 runs more than half of India's score of 300/6 (88 overs). The right-handed batsman struck 18  boundaries and two sixes to the delight of those present inside the stadium, the first time for an international cricket match in India amid the COVID-19 pandemic. Rohit, who became the first batsman to score centuries in all three formats against four teams -- England, South Africa, Sri Lanka and the West Indies -- stitched a century stand with vice-captain Ajinkya Rahane (67 off 149) to help India take the edge on a turning Chepauk top. At the draw of bails, Rishabh Pant and debutant Axar Patel were unbeaten on 33 and 5 respectively. For England, Jack Leach and Moeen Ali took a couple of wickets each, while Olly Stone and Joe Root claimed one each. Both the teams of changes in their respective XIs. India handed the Test cap to Patel and rested Jasprit Bumrah, who was replaced by Mohammed Siraj. Patel came in for Washington Sundar, while Kuldeep Yadav replaced Shahbaz Nadeem. England made four changes. Ali came in place of Dom Bess, Stuart Broad replaced rested James Anderson while injured Jofra Archer made way for Stone. Wicketkeeper Ben Foakes replaced Jos Buttler. Catch Day 1 highlights and scores here: