India entered the World T20 Final after their semifinal vs England was washed out. They will face Australia in the final, who defeated South Africa. Follow here highlights of India (IND) Vs England (ENG), and Australia (AUS) Vs South Africa (SA). 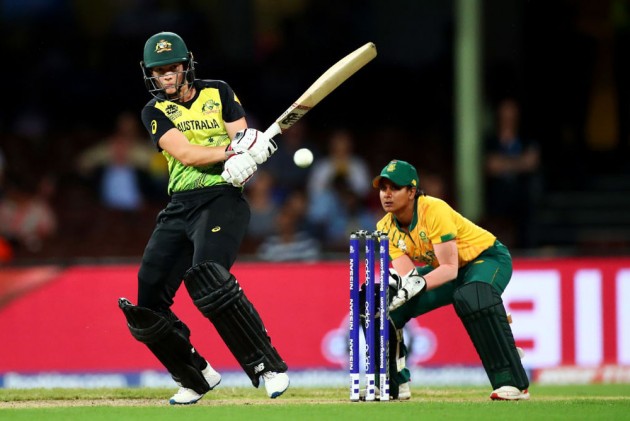 Australia defeated South Africa by 5 runs in their semifinal clash of the ICC Women's T20 Cricket World Cup. The Aussies will face India, who continued on with its unbeaten run, as they reached their maiden final, after their semi-final clash against England got washed out today, in Sydney. Rain followed by delay in toss, eventually led to not even a single ball being bowled. India were the lucky ones, as they finished Group A as winners with four wins, meanwhile, England finished Group B with three wins and a defeat. Follow here highlights of Australia Women (AUS) Vs South Africa Women (SA) and highlights of Indian Women (IND) Vs England Women (ENG).

16:57 hrs IST: OUT!!!!! Good delivery by Jonassen. Tyron sends it to long-off, where Lanning does the rest.

16:54 hrs IST: OUT!!! It was a legcutter by Schutt. Luus sends it to long-off, but doesn't have enough to reach the ropes. Mooney does the rest.

16:51 hrs IST: No run. It was a wider one by Kimmince. Excellent. Wolvaardt couldn't connect with it.

16:48 hrs IST: No run. A wider ball b Carey. Waolvaardt stabs it straight to point.

16:40 hrs IST: No run. Jonassen sends it straight on off. It makes a mess of Luss' backing-away-swipe.

16:34 hrs IST: One run. Molineux sends it shorter wide of off. Wolvaardt sends it to deep cover.

16:26 hrs IST: OUT!!! Schutt sends an inswinger. It was a good length one, pitching outside off. Van Niekerk jams the bat down, and it crashes against the stumps.

16:21 hrs IST: OUT!!! Molineux tosses it up. lee goes for a slog sweep over deep midwicket. It goes off the top edge, and goes all the way to wide long on. Gardner runs and takes a good catch.

16:17 hrs IST: One run. Van Niekerk sweeps away Jonassen's delivery with power. But Kimmince at square leg gets in the away.

16:15 hrs IST: No run. It was a good length slower ball wide off by Schutt. Lee sends it on the front foot to point.

15:23 hrs IST: Its a full toss by Khaka. One run. Lanning doesn't get everything on it and sends it leg side. She finishes one short of fifty. Excellent innings.

15:07 hrs IST: OUTT!!! It was a slower delivery by de Klerk. Haynes played all around it. Aussies lose another wicket.

14:49 hrs IST: One run. It was a flatter and around off ball by Tryon. Haynes sends it down towards long-off.

14:46 hrs IST: OUT!!! De Klerk sends it in the channel and nicks off Gardner. Nothing she could have done about it.

14:40 hrs IST: OUT!!!! Mlaba sends it on middle, long on and long off back. Jonassen sends it over long on, and Ismail comes in off the rope and takes a catch.

14:35 hrs IST: OUT!!! Van Niekerk sends a full and straight delivery. Mooney advances and tries to work through midwicket, but it slides through and hits the stumps.

14:29 hrs IST: No run. A good length ball by de Klerk, angled into middle. Lanning defends it on the front foot.

14:20 hrs IST: OUT!! Caught at midwicket!! It was inswinger by Khaka on leg. Healy tried to send it in the air over midwicket, but miscues it. It gets a thick inside edge, and goes to midwicket and van Niekerk catches it.

14:15 hrs IST: DROPPED!! NO RUN!! Chetty drops it behind the stumps. How costly could that be!! Mlaba sends a shorter length ball. Healy tries to cut it, but its tight to ff. She gets an edge and Chetty spills it.

14:11 hrs IST: FOUR!!! It was a good length ball by Ismail around of. Healy sends it straight of mid-off, off the splice.

14:07 hrs IST: No run. It was slanting in length delivery by Khaka. Healy clears her front leg and tries to slog it but the ball skids underneath to beat the under-edge.

14:01 hrs IST: One run. Ismail angles it to Mooney's hips. She hits it away backward of square leg.

13:55 hrs IST: The players are going into the field. No national anthems due to delay. Beth Mooney and Alyssa Healy to open for Australia.

13:52 hrs IST: After the toss, South Africa captain Dane van Niekerk said, "The rain around we want to know exactly what we need to do in a semi-final. But having said that we are going up against the number one team in the world today. Very sad to say Marizanne Kapp did not recover. So she's out for the semi-final. Nadine de Klerk is in."

Meanwhile, Aussie captain Meg Lanning said, "I wasn't sure. There might be some more rain coming so I was happy to let South Africa choose. Strip looks really good. Hopefully, we can make the most of it. Molineux and Kimmince come in for Perry and Sutherland."

13:33 hrs IST: It has stopped raining. The groundsmen are soaking up the water, while the umpires are inspecting the pitch. The Australians have already started warming up.

13:17 hrs IST: Light rain is back again. The hessian cover stays on, but no other covers.

13:03 hrs IST: The covers are coming off. The toss will be delayed though. The ground staff are cleaning up around the square.

13:02 hrs IST: Welcome back everyone! We will also be covering Australia's semifinal clash against South Africa. Although even this match could face similar fate as the previous semifinal due to persistent rain.

10:48 hrs IST: The match has been abandoned!! For the first time in history, India has reached its maiden T20 World Cup final. They make it through as they had more group stage points (8) than England (6).

10:12 hrs IST: Also, Shafali Verma on Wednesday rose to the top spot in the ICC women's T20 International rankings, riding on her stellar run at the ongoing World Cup. She takes over from New Zealand's Suzie Bates, who had been the top batter since October 2018 after wresting the spot from West Indies captain Stafanie Taylor.

10:09 hrs IST: It is still raining at the SCG. Two sides that are brimming with talent could see rain play spoilsport for one of them.

10:04 hrs IST: It is still raining. If it goes on like this, then India will see themselves enter their maiden final in this tournament.

09:34 hrs IST: If the second semifinal between South Africa and Australia is also washed out then the Proteas will advance to the final since they topped their group.

The second semifinal is scheduled to begin after the India-England match at the same venue.

There is no reserve day for the semifinals.

09:30 hrs IST: In case the match doesn't happen, India will go into the final, due to better performance and higher points in the group stage, as compared to England.

09:07 hrs IST: Good morning everyone and welcome to Outlook's live coverage of the Women's World T20 semifinal fixture between India and England. Its raining right now, so the toss has been delayed. To have a shortened game, a minimum of 10-overs-a-side is needed.

Aiming to make their maiden final appearance in World T20 history, India will be hope to peak at the right time against England at the SCG. Their fine run of form began with a win against Australia in the tournament opener, followed by beating Bangladesh, New Zealand and Sri Lanka to top Group A with eight points from four matches.

Form is on India's side, but history is with England, who have a 5-0 win-loss record against India in the World T20 championship. Both teams will look to play a full match, weather permitting. A minimum of 10 overs a side will be required for a result. There are no reserve days in the semis. If the match is washed out, then India go through to the final for having topped their pool (A). England had finished second in their group (B).

Last time in the 2018 edition, England defeated India in the semifinals. Before that India lost in 2009, 2012, 2014 and 2016 (all in group stages). The current Indian team has seven players, who played in the 2018 semifinal. The fact that India defeated England in a tri-series ahead of this tournament will give Harmanpreet Kaur's team a leg up.

Shafali Verma will be aiming to continue with her terrific batting displays, after having risen to top spot in the Women's T20 rankings. She has 161 runs in four innings at this World Cup. It's her boisterous start that has helped put runs on the board despite the fact that batting pillars Harmanpreet, Smriti Mandhana and Veda Krishnamurthy haven't really fired in the tournament.

In the bowling department, Poonam Yadav will once again look to continue taking wickets, having already scalped nine from four matches. The leg-spinner is also the tournament's highest wicket-taker.

Meanwhile, England finished second in Group B, with three wins and one defeat.

Their biggest strength has been batting. Natalie Sciver with an average of 67.33 will be the one big wicket that the Indians will try to pocket early.

In the bowling department, Sophie Ecclestone (8 wickets) and Anya Shrubsole (7) will look to dominate the Indian batsmen.