The first ODI between India and South Africa in Dharamsala was abandoned without a ball being bowled due to inclement weather. Here are the highlights of an eventful day, which was clearly dominated by off-field concerns including coronavirus outbreak 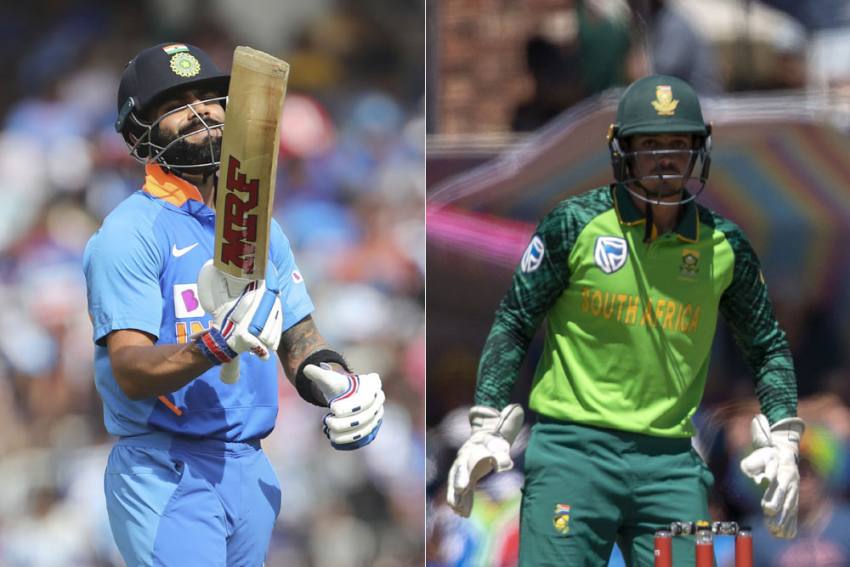 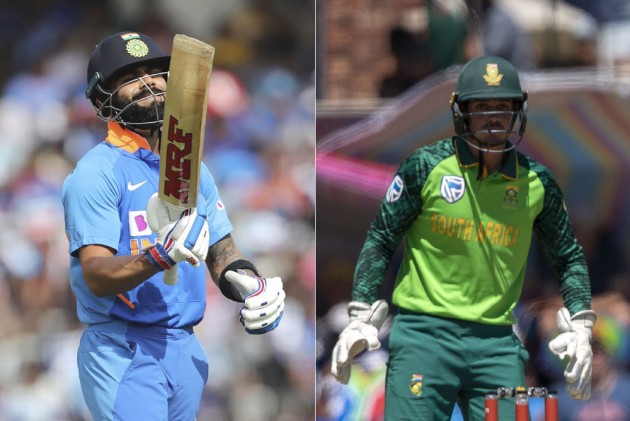 Amid the ever-rising danger of coronavirus, the three-match India-South Africa in ODI series started on Thursday on Dharamsala without any sporting action. It was the second match in less than six months to be abandoned at the picturesque Himachal Pradesh Cricket Association (HPCA) Stadium, because of inclement weather. Incidentally, that match was also an India-South Africa clash in September last year.

5:40 PM IST: The first ODI of the three-match series was always in doubt after the weatherman forecast widespread rains and thundershowers over the region on Thursday and Friday because of fresh western disturbance over north Pakistan and adjoining Jammu and Kashmir.

Fans and organisers had offered prayers at the Indrunag Temple in the hills overlooking the stadium in an attempt to appease the rain gods. Heavy rain had also lashed the hill town just after the two teams' practice sessions on Wednesday, forcing the organisers to cover the entire playing area. If that was not enough, it rained the entire night on the eve of the match.

The rain was not that heavy but was enough for water to accumulate, forcing organisers to press three super-soppers into action. But despite working tirelessly, the ground staff failed to clear the ground, forcing the on-field umpires to call off the match.

The cut-off time for a 20-over game was 6.30pm (IST) but the on-field umpires made their final inspection and decided to abandon the match much before that.

The novel coronavirus outbreak and adverse weather conditions affected ticket sales as well. The second ODI of the series will be played in Lucknow on March 15 while the third and final match will be in Kolkata's iconic Eden Gardens on March 18.

4:55 PM IST: Meanwhile, here's the message from Sports Minister Kiren Rijiju: "There are many confusions amongst the athletes at this moment. Two Advisories are issued by the Ministry of Youth Affairs & Sports for matches abroad and the domestic. There's no restrictions on playing but guidelines to be followed strictly in the larger interest of health."

There are many confusions amongst the athletes at this moment. Two Advisories are issued by the Ministry of Youth Affairs & Sports for matches abroad and the domestic. There's no restrictions on playing but guidelines to be followed strictly in the larger interest of health. pic.twitter.com/RoohGcsOma

4:30 PM IST: Two hours to the cut-off time, but no signs of covers coming off.

3:55 PM IST: It continues to pour down in Dharamsala. And fans are angry.

3:16 PM IST: And it's getting heavier. Even a 20-over match looks unlikely with more rain forecast.

2:57  PM IST: Another coronavirus update.  Indian boxing team returning from the Asian Olympic Qualifiers in Jordan will be "home-quarantined". A total of 13 boxers and almost an equal number of coaching staff arrive back on Thursday after clinching an unprecedented nine Olympic slots in the qualifiers. The boxers were training in Italy, one of the worst-affected by the coronavirus pandemic, till February 26.

Latest visuals coming in from Dharamsala. Does not look great at the moment.#INDvSA pic.twitter.com/Ob0GMvplm0

2:19 PM IST: Another tournament cancelled. A four-team international football tournament featuring European champions Portugal, FIFA World Cup finalists Croatia and Belgium and Switzerland in Qatar this month has been called off. The March 26-30 tournament was to be used as a warm-up event for Euro 2020.

2:13 PM IST: The tickets sales for the IPL opener between Mumbai Indians and Chennai Super Kings have been banned by the Maharashtra government.

1:50 PM IST: Here's the latest coronavirus count in India -- 73 on Thursday as per the data provided by the Ministry of Health and Family Welfare. Of these 56 are Indian nationals and 17 are foreigners. The data took into account cases compiled till 11 a.m. on the day.

Delhi has six cases -- all are Indians, while in Haryana there are 14 confirmed cases and the patients are foreign nationals. Kerala reported most cases, a total of 17. Out of which three people have recovered earlier.

1:39 PM IST: Important IPL update -- The Supreme Court has refused urgent hearing on the plea seeking postponement of the league amid coronavirus outbreak.

The vacation bench headed by Justice Uday Umesh Lalit and comprising Justice Aniruddha Bose asked lawyer-cum-petitioner Mohan Babu Agrawal to mention his matter before the regular bench and refused to hear the mentioning.

1:37 PM IST: Meanwhile, here's why damage caused by coronavirus is not limited to our bodies - READ.

1:11 PM IST: By the way, Kohli is 133 runs away from breaking Sachin Tendulkar's ODI record of fastest to 12,000 runs. Tendulkar had taken 300 innings to get to the landmark. Former Australian captain Ricky Ponting is currently second on the list having reached 12,000 ODI runs in 314 innings while former Sri Lanka captain Kumar Sangakkara did so in 336 innings. Kohli has batted 239 times so far in ODIs.

1:08 PM IST: And here are some fascinating Virat Kohli numbers which will invigorate Indian fans:

1:00 PM IST: Meanwhile, here's what Sunil Gavaskar said in the pitch report for the official broadcasters: 'This is a typical Indian pitch, the batsmen will enjoy themselves".

Update - Toss has been delayed in Dharamsala. Next inspection at 1.15 PM IST.

Stay tuned for updates on #INDvSA

12:46 PM IST: The International Cricket Council (ICC) is reportedly having discussions over whether to hold its executive meetings or not. The ICC meeting is scheduled to be held from March 26 to 29 in Dubai.

"It is only being discussed. We will announce through usual channels if confirmed," an ICC source said.

12:42 PM IST: India vs South Africa series is one of the few sporting events to be played in front of the fans. The Road Safety World Series becomes the latest event to be played behind closed doors.

12:34 PM IST: Here's a look at the India vs South Africa head-to-head record:

India and South Africa have met 84 times, with the Proteas winning 46 times as against India's 35. There were three no results. In their first-ever meeting, post-Apartheid, on 10 November 1991, India won by three wickets. The last meeting, during an ICC World Cup match at Southampton, was also won by India (by six wickets). In fact, India have won eight of the last ten meetings. In India, the hosts have won 15 off the 18 matches. But the last time they met in India, South Africa registered a thumping 215-run win at Mumbai on October 25, 2015 with Quinton de Kock (109), Faf du Plessis (133 retired hurt) and AB de Villiers (119) hitting centuries.

12:31 PM IST: And the fate of the IPL 2020 will be decided on Saturday when the league's Governing Council meet. It's scheduled to start on March 29.

12:27 PM IST: The Sports ministry has asked all national federations, including the BCCI, to follow the Health Ministry's advisory and avoid large gatherings in sports events. Sports Secretary Radhey Shyam Julaniya told that sporting events in the country can continue but without the presence of large number of people.

12:21 PM IST: The BCCI medical team on Wednesday told India players to avoid eating out and mingling with fans seeking selfies in the wake of the novel coronavirus outbreak. Here are do's and don'ts:

·       covering mouth while sneezing or coughing,

·       reporting to the medical team immediately in case of fever, cough or any illness,

·       avoid eating out at restaurants where hygiene standards are unknown or compromised,

12:05 PM IST: IPL takes a hit. Foreign players will not be available till April 15 du to coronavirus visa restrictions. The Indian government issued a fresh advisory with a ban on all existing foreign visas, except a few categories like diplomatic and employment, till April 15 in the wake of new positive cases of the novel coronavirus in the country.

First, India lost their previous ODI series 0-3 in far away New Zealand. On the contrary, before catching the flight to India, the Proteas whitewashed a strong Australian side 3-0.

"We have just beaten a very good team now. We needed confidence and it will certainly give us a lot of confidence. India is going to be a tough test. Lot of guys haven't played a lot of cricket in India. What's impressive is guys have responded to the messages we have sent out to them on batting and bowling perspective," said South Africa head coach Mark Boucher and he would want his troops to replicate their Australia performance against the Men in Blue.

Second, the skipper. King Kohli has lost his touch. In his last ten outings, across formats, the highest was 51, in the first ODI against the Kiwis. In front of home fans, and just ahead of the IPL, the superstar can't afford to have another poor series.

Then, the fans. They will risk everything to catch a glimpse of their beloved stars in action. In such times, cricketers should at least play well and repay the fans, in love.

"There are few do's and don'ts which the team doctor wants us to do. Simple things like maintaining hygiene, washing hands regularly and not going closer to fans and all those things, etc. But we cannot avoid fans because they love us, they support us. In the meantime, we can try and not get too close to them. We can avoid as much as we can," Indian pacer, who is making a comeback, said about the precarious situation.