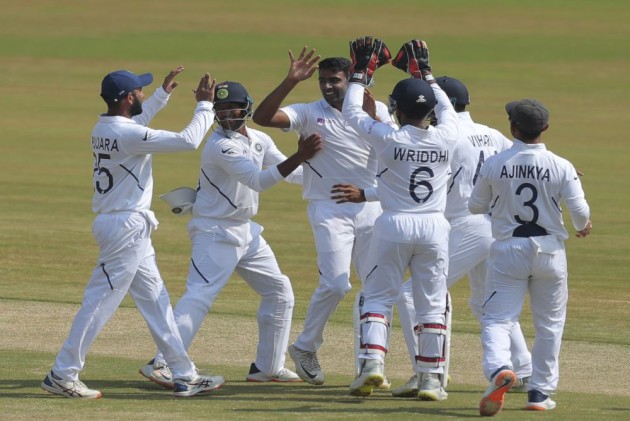 16:28 hrs IST: OUT! That'll be stumps. South Africa 275 all out. Ashwin ends with four wickets. Pitches on middle and leg, Rabada plays down the wrong line, expecting it to turn, but it hits his pad. Initial decision is out, but the South African reviews it. The ball-tracking shows it to be crashing into leg-stump.

16:15 hrs IST: OUT! A super innings by Maharaj (72) but Ashwin gets him. The offie offers some flight, on leg stump, Maharaj looks to flick it away, gets a thin edge onto pad and straight to Rohit. Finally, a breakthrough for India. Kagiso Rabada comes to the crease. South Africa are 271/9

Antoine Griezmann has urged France to immediately turn their focus towards Monday's date with Turkey after beating Iceland 1-0 in Reykjavik. The Barcelona forward won the penalty Olivier Giroud converted midway through the second half to secure three points, inflicting a first home loss in a year on their hosts. World champions France stumbled to a 2-0 defeat against Turkey in June, well beaten in Konya and condemned by critics who had come to expect success.

14:36 hrs IST: Shami keeps it tight. South Africa are 197/8. Second new ball due in two overs. Get a feeling Kohli will take it straight away.

14:31 hrs IST: All set for the final session. Philander and Maharaj make their way out in the middle. Shami to continue

13:30 hrs IST:  If India can take the remaining two wickets within the next 15-20 minutes, then there is a chance of follow on. Else, we could have the hosts' second innings. The bowlers would need some rest. South Africa are 175/8. Philander 18*, Maharaj 4*

13:06 hrs IST: OUT! Ashwin finds the outside edge this time, and Rahane completes an easy catch at slip. Straight ball, outside off, Du Plessis (64) looks to defend but gets an outside edge. He walks back dejected. Second wicket for Ashwin. Keshav Maharaj comes to the crease. South Africa are 162/8

12:58 hrs IST: FOUR! Tossed up from Ashwin, Philander gets into position early and drills it straight of mid-off for a boundary. Expensive over from the Indian, eight off it. South Africa are 161/7. Du Plessis 63*, Philander 13*

Alexander Zverev ended a frustrated Roger Federer's hopes of a third Shanghai Masters title as he claimed a stunning quarter-final triumph. The German took his head-to-head record against the 20-time Grand Slam champion to 4-3 with a display of immense quality and huge character. READ HERE

12:46 hrs IST: FOUR! Too full from Ashwin, and too straight, Philander hits it past short midwicket for a boundary. South Africa pass 150. Saha says "dheere dheere isko" to Ashwin. Means he wants Ashwin to bowl slower to Philander.

12:22 hrs IST: OUT! Good length delivery from Jadeja, outside off, and it turns back in. Muthusamy offers no shot and gets hit on the pads. India strike again. The umpire had a good look and took his time before taking the decision. Muthusamy chats with Du Plessis and reviews the on-field decision, but it doesn't make a difference. Vernon Philander comes to the crease. South Africa are 139/7

12:13 hrs IST: Play about to restart after lunch. Du Plessis on strike. Jadeja to resume proeceedings.

11:32 hrs IST: That's lunch. South Africa 136/6. Du Plessis 52*, Muthusamy 6*. Still trailing by 465 runs, and though Du Plessis is playing well, the others have not managed to hang around. Ashwin got de Kock with a beauty. India will be aiming to bowl the visiting side out in the next session. We'll be back in about 35 minutes. Stay tuned!

11:20 hrs IST: OUT! Tossed up from Ashwin, dips on De Kock, and the South African is caught on the crease, feet not moving. Pitches on middle and leg, and spins to shatter the bails. Brilliant! Senuran Muthusamy comes to the crease. South Africa are 128/6.

11:16 hrs IST: FOUR! Fuller delivery from Jadeja, and Du Plessis beats the man at cover to complete his half-century, 21st overall. He has been positive against India's spinners. Should look to get a big one now. Costly over from Jadeja, 12 off it. South Africa are 124/5. De Kock 27*

Dutee Chand on Friday (October 11) smashed her own national record, clocking THIS in the women's 100m semifinals on her way to the gold medal at the 59th National Open Athletics Championships in Ranchi. A fortnight after failing to reach 100m semis at the World Championships in Doha, the 23-year-old surpassed her previous timing of 11.26s which she had set at the Asian Championships in April this year.

11:07 hrs IST: FOUR! Overpitched from Jadeja, outside off, De Kock presses forward before playing the square-drive. Raced away to the boundary. South Africa are 105/5. Du Plessis 32*, De Kock 26*

11:00 hrs IST: SIX! Flight on offer from Jadeja, Du Plessis gets forward, and lofts this comfortably over the bowler's head for a maximum! South Africa (95/5) finally have a partnership going here. Du Plessis 27*, De Kock 21*

10:56 hrs IST: FOUR! Full from Shami, outside off, De Kock leans forward and drives through cover. Super shot! Can't get any better! What if Du Plessis bats at No. 3 and QDK at No. 6? South Africa are 88/5. Ravindra Jadeja comes back into the attack.

England missed an opportunity to qualify for Euro 2020 as they slid to a 2-1 loss in the Czech Republic, while Cristiano Ronaldo scored his 699th goal in a routine Portugal win over Luxembourg. READ HERE

10:31 hrs IST: FOUR! Too full from Ashwin, De Kock gets forward, gets close to the ball and then drives to the wide of cover-point for a boundary. South Africa are 71/5. Du Plessis 15*, De Kock 5*. Drinks are on the field now. India's hour. They removed the nightwatchman early and then De Bruyn, who was looking good for a big score.

10:21 hrs IST: Good first over from the offie. A maiden! Get a feeling Rassie van der Dussen would be perfect for South Africa. He has the right temperament and a fine FC average (43.59). Should replace Theunis De Bruyn/Temba Bavuma for the third Test. South Africa are 58/5

10:00 hrs IST: OUT! Back of a length delivery from Umesh, outside off, De Bruyn looks to hit it through the cover region but gets a thick edge and Saha does the rest - diving across to his right and grabbing it with both hands. South Africa (53/5) have lost half their side. Quinton de Kock comes to the crease.

F1 NEWS - Qualifying for the Japanese Grand Prix has been moved to Sunday (October 13) due to the approach of Typhoon Hagibis, Formula One has confirmed. Weather maps indicate the tropical storm is set to pass by Suzuka on Saturday and consequently, all F1 activities have been cancelled with safety in mind. READ HERE

09:47 hrs IST: OUT! EDGED AND CAUGHT! A well-directed short delivery from Shami, Nortje was undone by the lift, gets a thick edge, and Kohli takes a fine catch at the fourth slip position. The nightwatchman played around five overs of the brand new ball. Faf du Plessis comes to the crease. South Africa are 45/4

09:35 hrs IST: FOUR! Pitched up from Shami, swinging in, De Bryun leans forward and drives it between midwicket and mid-on for a boundary. Decent over from the Indian despite the boundary. South Africa are 40/3. De Bruyn 24*, Nortje 2*. Umesh comes back into the attack.

09:30 hrs IST: The players are out in the middle and we are ready for the first ball. De Bruyn on strike. Shami to start

DID YOU KNOW? 225 - Partnership between Kohli and Ravindra Jadeja - the highest for the fifth wicket for India against South Africa surpassing the 220-run stand between Tendulkar and Sehwag in Bloemfontein in 2001-02.

STAT ATTACK - 138 - Innings taken by Virat Kohli to reach the landmark of 7,000 runs - the joint fourth-fastest after Wally Hammond (131), Virender Sehwag (134) and Sachin Tendulkar (136). Gary Sobers and Sangakkara also reached the landmark in their 138th innings.

Ajinkya Rahane: "I think the way we batted (was good). Initially there was assistance of the fast bowlers. Mayank batted really well. We were thinking of 500-plus, not 600 but the manner in which Virat and Jadeja batted made it look very easy. It was not a 600 wicket. We (Kohli and he) enjoy each other's company. We knew we were one batsman short so we had to get a partnership going. I thought that partnership was very important for us. I think fast bowlers still have good assistance if you can bowl in the right areas. But the ball is turning too, and we all know Jadeja and Ashwin can bowl on any track."

08:45 hrs IST: Hello and welcome to Outlook's live coverage of Day 3 of the second Test between India and South Africa.