IND Vs SL, 1st T20I As It NOT Happened: Rain Washes Out Guwahati Tie Between India And Sri Lanka

The first T20 International between India and Sri Lanka at Barsapara Cricket Stadium, Guwahati was called off without a ball being bowled due to wet pitch on Sunday. Here's as it not happened... 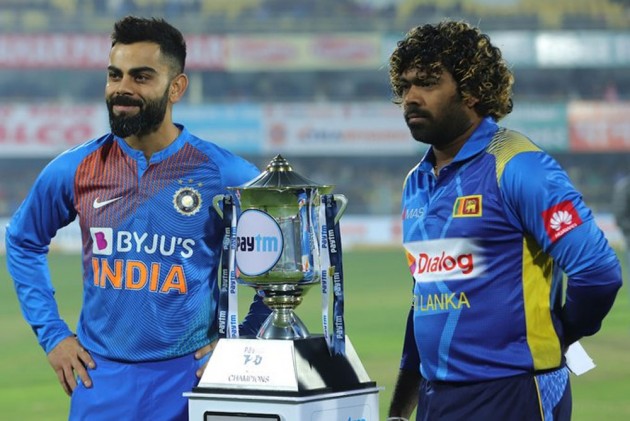 — BCCI (@BCCI) January 5, 2020
9:54 PM IST: Here, it comes. The bad news. It's over.
9:51 PM IST: This is killing! No update from the officials.
9:47 PM IST: Times up, but we are still waiting for the news.
9:40 PM IST: Meanwhile, HERE's everything you need to know about the U-19 World Cup. India are the defending champions.
9:37 PM IST: Aakash Chopra again, with another update. He thinks it's not dangerous but umpires will take the side of caution. And it's a schoolboy error from the groundstaff to let the water sip in, probably while removing the covers.
9:34 PM IST: Interestingly, groundstaff are still working.
9:32 PM IST: Umpires are out and they are busy. But they don't look happy.
9:26 PM IST: Aakash Chopra giving the all-important update. Everything is fine, except those damp patches. And he doesn't see the match happening.
9:16 PM IST: And there's a glimpse of Harbhajan Singh and Irfan Pathan entertaining the crowd. Harbhajan's dancing.
9:12 PM IST: Next inspection at 9:30 PM IST. By then, we should have a definitive update.
9:07 PM IST: This is a shame. Not a soul leaving the stadium, but the chances of happening the match are very very low. 9:46 is the cut off time for a five-over match.
9:03 PM IST: Anil Chaudhari and Nitin Menon are out. They are counting the damp spots, literally.
8:58 PM IST: Virat Kohli just had another round of inspection, along with Shikhar Dhawan and Rishabh Pant. Groundsmen have used iron and hair-drier to dry to pitch. Umpires will be out soon, for their own inspection.
8:45 PM IST: Down Under, Hobart Hurricanes' D'Arcy Short smashed the first century of the ninth season of Big Bash League (BBL). He made the most of a number of reprieves to register an unbeaten 70-ball 103 that included three fours and seven maximums, taking his tally for the season to 248. This was Short's second BBL hundred.
8:29 PM IST: Rain has stopped. Groundsmen are with blowers. Still some 30 minutes to the next inspection.
8:15 PM IST: Ok. Rain is back.
8:05 PM IST: And more bad news. Inspection pushed back to 9:00 PM IST. Virat Kohli was there in the centre and he looked concern, after looking at a particular spot on the pitch. Damped.
7:58 PM IST: Next update at 8:15 PM IST.
7:52 PM IST: And covers are coming off.
7:48 PM IST: Umpires are out there, checking the outfield. The rain has stopped.
7:40 PM IST: Australia batting great Ricky Ponting also opposed ICC's idea to make Test cricket a four-day affair, saying he is not keen on changing "something's that's not really badly broken". He thus joined the likes of India skipper Virat Kohli, Sachin Tendulkar, Gautam Gambhir, Australian coach Justin Langar, spinner Nathan Lyon and pace legend Glenn McGrath in disapproving shortening Test matches.
7:34 PM IST: Shikhar Dhawan, who will need to fight for his spot, said injuries are part and parcel of the game. "It's a new year, looking forward to a new start. I always take things in a positive manner. Injuries are natural, just take them in my stride. Looking forward to score lots of runs this year, be a more impactful player, win matches for my team and win the World Cup. This series is a good opportunity for me to score runs..."
He was talking to Laxman Sivaramakrishnan.
7:30 PM IST: Elsewhere, Dom Sibley and Joe Denly stretched England's lead on an attritional third afternoon of the second Test against South Africa at Newlands after James Anderson had polished off the home side's first innings in the morning.  England were 109 for two in their second innings at tea, an overall lead of 155 runs.
7:22 PM IST: 7:20 PM IST: Still some drizzle and supersopper is being deployed.
7:10 PM IST: The rain gets heavier. Here's a quick look at Weather.com, for hourly updates. 8:00 PM start still possible. 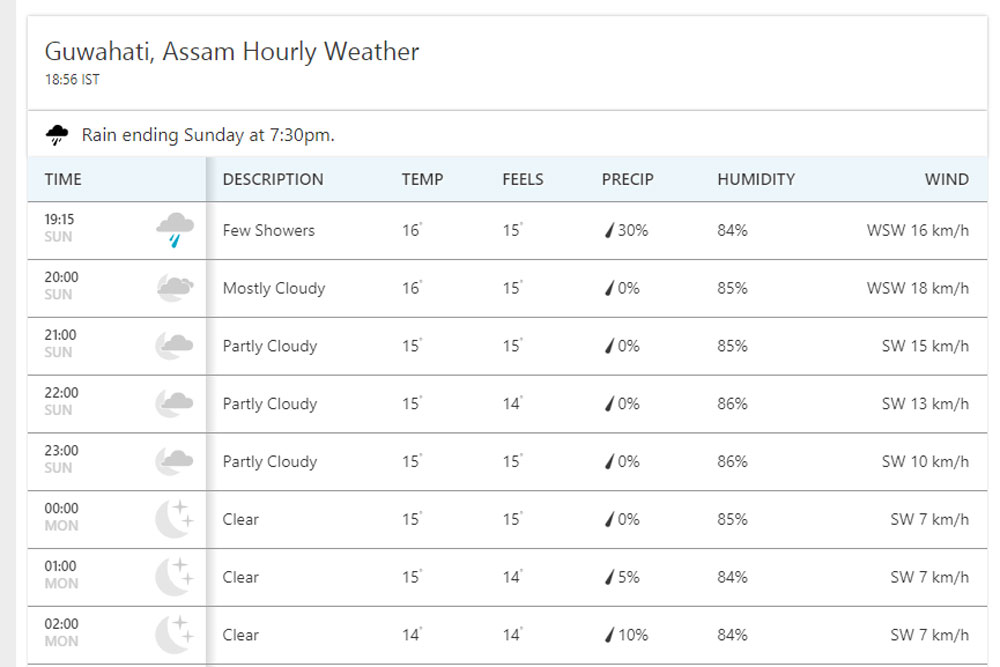 Weather.com screengrab.
7:03 PM IST: Meanwhile, everyone in the studio is talking about the apocalyptic bushfire in Australia. Dean Jones, in fact, requested the rain to be sent Down Under. Here's how the sports stars get behind Australia bushfire relief.
6:59 PM IST: Meanwhile, have a look at the glittering trophy.

6:57 PM IST: It's supposed to be intermittent cloud, as forecast by the weathermen, but it's raining. And there's lightning too.
6:47 PM IST: Then, we have the drizzle. And the covers are there. Looks like a passing thing. Play should start in time and last 40 overs.
6:40 PM IST: Playing XIs -

Virat Kohli: We haven't played here in a while. Last time we played here, we chased well. The game we played prior to that against Australia, they chased well too. The track does play differently in the second half as compared to the first part. There isn't too much of a difference in conditions, except that the track settles down better later on with the wet ball. Last year, we were outstanding in two formats, T20Is not so much. Good thing though is that we have a World Cup coming up and we'll be taking things more seriously. Pandey, Samson, Chahal and Jadeja aren't playing.

Lasith Malinga: Happy to bat first. Don't think the track will change too much. We have prepared well. Need to put runs on the board. We have brought 16 players as we need to finetune our combination for the World Cup. Three seamers and two spinners for us.

6:28 PM IST: We just had pitch reports from Murali Karthik and Sunil Gavaskar. They agreed that the Barsapara pitch is not a pretty one. Win toss and bowl first. "Captains will want to chase because he doesn't want dew to affect his bowlers".
Assam, for a change, can relax a bit and witness the best of India has to offer. Sport, it goes without saying, has the power to heal any frightened society. And in India, nothing comes closer to cricket. If one has to read the obvious faultlines, vis-a-vis the protesting 'majority' against the Citizenship (Amendment) Act in the state, we better confine ourselves to the sporting affairs, alone. With the peace messengers themselves deciding to stay shielded from the chaos that has engulfed the nation, we better stick to reporting their personal affairs and of course, on-field exploits. After all, they are also on national duty.
So, India enter the World Cup year with a home series against Sri Lanka, a side that can do serious damage to any side. Even without their regulars, Sri Lanka blanked Pakistan 3-0 in Pakistan. And now, they are a full-strength team with Lasith Malinga leading the side and Mickey Arthur at the helm. For India, the focus is on Jasprit Bumrah and Shikhar Dhawan -- both returning from injury lay-offs. Bumrah has his spot reserved in the team, but Dhawan can't afford any slip up with KL Rahul enjoying a successful partnership with now rested Rohit Sharma.
India sure have the advantage -- home conditions and superior head-to-head record. But Virat Kohli & Co will not take the visitors likely.
Squads: