India defeated Sri Lanka by 78 runs in the third and final T20 International to win the three-match series 2-0. Catch highlights of the IND vs SL match here 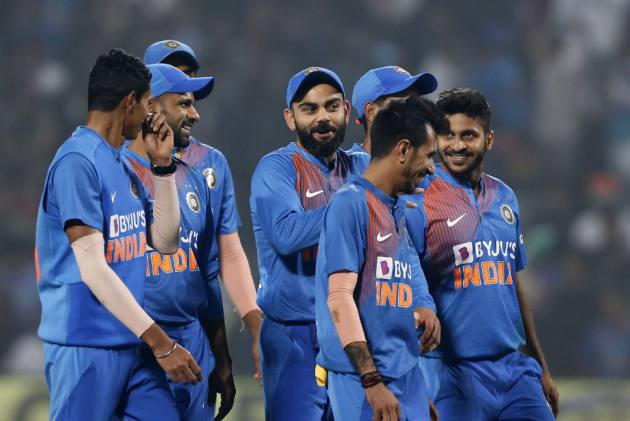 KL Rahul and Shikhar Dhawan hit fifties to help India post 201/6. Then the bowlers dismissed Sri Lanka for 123 with 4.1 overs remaining. India were at 164/6 with 16 balls remaining, then Manish Pandey and Shardul Thakur cut loose as India ended their innings with a flourish. In the second half, Indian bowlers turned with their best and dismiss the visitors for a paltry 123, for their sixth consecutive series win against the Islanders.

Jasprit Bumrah becomes India's leading wicket-taker in the T20Is even as his pace-mates Navdeep Saini and Shardul Thakur continued to impress. Washington Sundar got a wicket. Yuzvendra Chahal was wicketless, but he made up with a direct hit. For Sri Lanka, Dhananjaya de Silva was brilliant. He made 57 off 36.

9:50 PM IST: Washington Sundar on with his third over. Angelo Mathews hits the first ball for a six, over long-on. Another attempt for a six, but this time, Manish Pandey takes a very good catch at long-on. Dasun Shanaka, right-handed batsman, is the new man. Eight runs from the over. SL - 96/5 (12); De Silva - 41, Shanaka - 1. They need 106.

9:14 PM IST: Change of ends for Jasprit Bumrah. Hits Kusal Perera by a dipping full toss. And in the mix, Oshada Fernando is run out by Manish Pandey for 2 off 5. Pandey, after picking the ball at point, runs to the striker's end and whips the bails off. Angelo Mathews is the new man. Wicket maiden.  SL - 15/3 (4); Perera - 1, Mathews - 0.

8:57 PM IST: Jasprit Bumrah with the new ball. Danushka Gunathilaka faces the first. His opening partner is Avishka Fernando. A single, a double and a single. A wide, then the wicket of Gunathilaka (1 off 2). Simple catch for Washinton Sundar at mid-on. SL - 5/1 (1); Gunathilaka - 1.

8:47 PM IST: Asked to bat first, India got off to a flier with both the openers KL Rahul and Shikhar Dhawan hitting fifties. The hosts then suffered a mini-collapse but ended their innings with a flourish. Manish Pandey and Shardul Thakur added 37 runs in 14 balls to help India post 201/6.

8:30 PM IST: Lahiru Kumara returns for his third over. A short ball to Manish Pandey, and a four to midwicket boundary. Two singles, and run out. Suicidal second run for Kohli. Good throw from Danushka Gunathilaka from deep square leg. Washington Sundar joins Pandey, and he holes out. Caught by Lakshan Sandakan at third man. Shardul Thakur, right-handed batsman, is the new man. Nine runs from the over. IND - 167/6 (18); Pandey - 18, Thakur - 1.

7:39 PM IST: Angelo Mathews returns for his second over. A single, then Shikhar Dhawan takes a double, to extra cover. A wide, then a four past backward point fielder. Dutile attempt to stop the ball. Two dots, then a single to end the over. Nine runs from the over. IND - 72/0 (7); Rahul - 31, Dhawan - 37.

7:28 PM IST: Lasith Malinga continues. Three on the trot. Strange tactics. A double to fine leg, then a single to deep square leg. Luck running India's way. A very good delivery and Shikhar Dhawan gets a fine edge for a four.  Should have been a regulation catch for first slip. Two singles, then Dhawan flicks the last ball past mid-on fielder for another four. 13 runs from the over. IND - 52/0 (5); Rahul - 28, Dhawan - 21.

7:22 PM IST: Bowling change. Dhananjaya de Silva, right-arm off break, replaces Angelo Mathews. A single off the first ball, then Shikhar Dhawan lofts the second over mid-off for his second four. A single then a dot. KL Rahul hits the fifth ball for a six, over fine leg. A low full toss, and Rahul makes de Silva pay. A single to mid-off to end the 13-run over. IND - 39/0 (4); Rahul - 24, Dhawan - 12.

7:12 PM IST: Angelo Mathews shares the new ball with Lasith Malinga. Two dots then Shikhar Dhawan flicks the third ball and dropped catch. Completely misjudged the catch at deep square leg by Dasun Shanaka. A single then KL Rahul hits the fifth ball for a four, to sweeper cover. Wow. Rahul times the next delivery to perfection and he hesitantly runs. Four through covers. 13 runs from the over. IND - 22/0 (2); Rahul - 14, Dhawan - 6.

7:06 PM IST: Busy first over. Three singles, two wides and a four off the last ball, hit by KL Rahul to backward point boundary. Nine runs from the over.

6:40 PM IST: Malinga at toss - There might be dew in the second innings. Our top-four batsmen need to get big runs. We have two changes. Angelo and Lakshan Sandakan in.

6:36 PM IST: Kohli at the toss - we actually wanted to bat fist. Toss was almost irrelevant. We wanted to bat, try something different. Three changes today. Sanju Samson comes in place of Rishabh Pant. Chahal replaces Kuldeep who gets a rest today and Manish Pandey gets a game in place of Shivam Dube.

6:23 PM IST: Pitch made for runs, that's what Sunil Gavaskar feels. Murali Karthik probes the legend and they agree -- win toss, and chase. Toss coming up next.

Sri Lanka missed Udana's services while defending a meagre 143 against India here on Tuesday after the bowler injured his back just before Sri Lanka went out to bowl. And they somehow, haven't been using Mathews, probably one of their most experienced players.

In the last one year, India have won some (9) and lost some (7). Now, they have a very good chance to complete a third straight T20I series victory with a tenth win in 20 outings. And India should win. Let's see how India approach the third and final T20I match against Sri Lanka at Pune tonight.

Sri Lanka are turning out to be the easiest of the opponents India could face, despite the fact that Islanders, a second-string one, humbled top-ranked Pakistan in their own den only four months ago. One match was enough to fathom the gap between the two sides.

Everything worked for India at Indore after Guwahati wash-out -- won the toss, struck whenever they wanted and chase down the target with the top four hittings 30s. So, what now? There are talks of experiments going on in the Indian camp, with an eye on the World T20.

Rohit Sharma is already rested, and allowed two matchwinners in Jasprit Bumrah and Shikhar Dhawan to make a return. Can India do more, probably tweak the combination and give the likes of Manish Pandey and Sanju Samson game time.

Last year, India started their T20I engagements with a 1-2 series defeat at New Zealand, they lost to Australia 0-2 at home. India did manage to blank the West Indies 3-0 in the Caribbean, then failed to beat South Africa at home, settling with a 1-1 draw. More tests for India followed as Bangladesh and the Windies kept the finale alive. Those were the parts of the cycle before the 2020 World T20 Down Under.