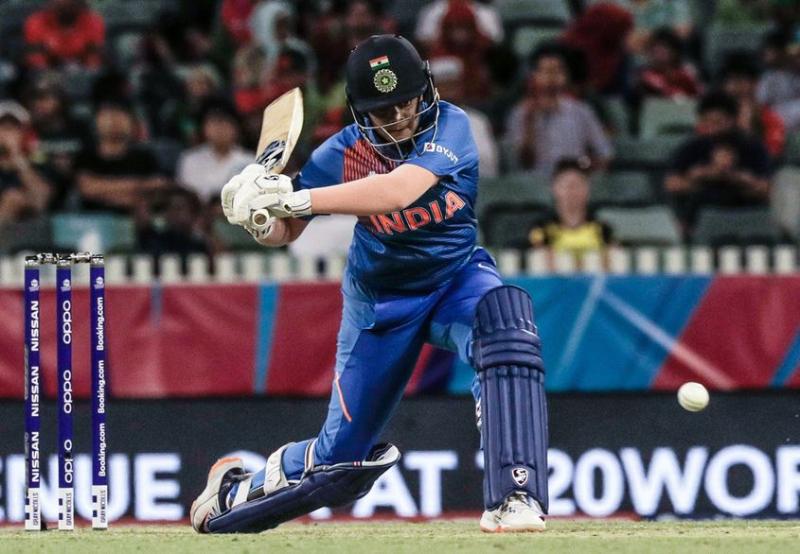 It was just what Harmanpreet Kaur and India, defeating Sri Lanka with ease in their ICC Women's T20 Cricket World Cup fixture. Having already sealed a semifinal spot earlier, India were still at their best, with Radha Yadav leading the way with her best T20I figures (4 for 23) and Shafali Verma led her side in the batting front with a quickfire 47. Sri Lanka's batting, bowling and fielding dissapointed hugely. Follow here highlights of Indian Women (IND) Vs Sri Lanka Women (SL).

12:14 hrs IST: FOUR!!!!! Not a good delivery by Thimashini. Deepti goes down on one knee and slog sweeps through mid-wicket.

INDIA WIN BY 7 WICKETS WITH 32 BALLS TO SPARE.

12:03 hrs IST: OUT!! Third umpire declares the dismissal. It was a full ball by Prabodhani. Rodrigues sends it to midwicket. Shafali didn't make much of an effort, and was slow. Good throw to the striker's end.

11:53 hrs IST: OUT!!! It was a good delivery by Siriwardene. Kaur walks down the track and swings her bat. She miscues her shot towards long-on, where Karunaratne catches it.

11:46 hrs IST: FOUR!!!! A full delivery o middle by Jayangani. Kaur sweeps it in the same direction for a four.

11:38 hrs IST: No run. It was full around off by Siriwardene. Kaur defends it.

11:32 hrs IST: OUT!!!! It was a slower delivery by Prabodhani on off. Mandhana drags it across the line and sends it to mid-on for a catch.

11:26 hrs IST: A full delivery by Sandeepani. Mandhana sends it down to long-on. One run.

11:21 hrs IST: FOUR!! Not a good one by Siriwardene. Verma shimmies down the pitch and sends it over mid-off.

10:55 hrs IST: OUT!! Pandey sent it on the off stump with good length. Sandeepani misses the shot as she tries to beat the third man.

10:54 hrs IST: OUT!!! Poonam tosses it up on middle and off. De Silva swings it across the line, but only gets height. Kaur runs from midwicket and catches it.

10:44 hrs IST: 2 runs. It was a full toss by Pandey. Dilhari sends it through the cover region.

10:39 hrs IST: OUT!!! LBW!!!! Yadav tosses up her delivery. Anushka fails to connect with her sweep. It hits the back pad, and replays show it hits the top of off stump too. Radha's fourth wicket!!!

10:33 hrs IST: OUT!! It was a length delivery by Gayakwad on middle and leg. Siriwardene hit it straight to long-on for a catch.

10:29 hrs IST: OUT!! EXCELLENT CATCH!!! It was a loopy delivery by Yadav, Karunaratne lofts it but fails to clear the long-on fence. Veda goes back and catches it.

10:25 hrs IST: FOUR!!! It was a loopy ball by Gayakwad. Siriwardene hammers it over mid-off with power.

10:20 hrs IST: OUT!!! CAUGHT!!! It was a straight delivery outside off by Yadav. Perera gets a nick, and to straight goes to the keeper.

10:08 hrs IST: OUTT!!!! WHAT DID SHE DO!!! It was a rank long ho[. Athapaththu could have sent it anywhere but sent it straight to deep square leg's throat, where Pandey caught it easily.

10:02 hrs IST: OUT!!!! WHAT A BALL!!!!! Gayakwad's delivery spins in from a length, beats Madavi's inside edge and goes through her legs, crashing onto the stumps.

09:53 hrs IST: No run. It was a flat ball by Gayakwad. Athapaththu misses to cut it.

09:50 hrs IST: FOUR!! It was a full delivery by Pandey, outside off. Athapaththu slams it over mid-off.

09:42 hrs IST: OUT!!! INDIA HAVE DONE IT!!! It was a flighted ball by Sharma. Thimashini comes down the track but has to reach out to make contact. She slices it to backward point for a simple catch.

09:40 hrs IST: FOUR!!!! Pandey overpitched it. Athapaththu sends it over the bowler's head!

09:36 hrs IST: One run. It was a full ball by Sharma. Athapaththu sends it towards mid-wicket.

09:22 hrs IST: Both teams walk into the field, for their pre-match formalities.

09:13 hrs IST: "We are okay with both but great opportunity for us to chase, we haven't done that yet. We are sticking with the same players as the last game. We are doing quite well, we don't want to try anything else," said Harmanpreet Kaur after the toss.

09:12 hrs IST: After the toss, Sri Lanka captain Chamari Atapattu said, "120 is a good score in these conditions. We have one change."

09:05 hrs IST: Good evening everyone and welcome to Outlook's live coverage of the ICC Women's T20 Cricket World Cup fixture between India and Sri Lanka. Having already sealed their semifinal berth, Harmanpreet Kaur's side will be hoping to work on their batting issues against a team, who have had a very poor tournament.

India have been in fine form in the women's T20 World Cup. They have beaten hosts and defending champions Australia, Bangladesh and New Zealand but can't afford to take Sri Lanka lightly. The Lankan girls have lost two matches are out of the semifinal race.

Considering their excellent form, India still have a lot of work to do, especially their batting performance. In all three previous outings, India have failed to reach big totals, having managed 132 against Australia, 142 against Bangladesh and 133 versus New Zealand.

Also, India's middle-order has failed to build on the excellent starts by the pugnacious Shafali Verma. In all three matches, the bowling department has come to India's rescue and bailed out Harmanpreet Kaur's team.

The team is also over-reliant on the 16-year-old Shafali, who has covered up poor batting displays by Smriti Mandhana and Harmanpreet. The youngster has scored 29, 39 and 46 in the three games.

Harmanpreet has rued the inability of her batswoman to capitalise on good starts and cautioned them against making "silly mistakes" in the knock-out rounds.

"It's a great feeling when your team performs day in day out. Still, we made the same mistakes after a good first 10 overs, we got a good start but couldn't carry the momentum," Harmanpreet has said.

"We can't make silly mistakes with harder games coming up. Shafali (Verma) is giving us good starts, her initial runs are crucial for us," she added.

Meanwhile, the bowling unit has been excellent for India. Leggie Poonam Yadav has registered eight wickets so far, and has supported well by the likes of Rajeshwari Gayakwad, Deepti Sharma and pacer Shikha Pandey.