Chennaiyin FC continued their winless run in the 2019-20 Indian Super League, as they fell to a defeat Vs ATK at the Jawaharlal Nehru Stadium. Catch the highlights of Chennaiyin FC Vs ATK here 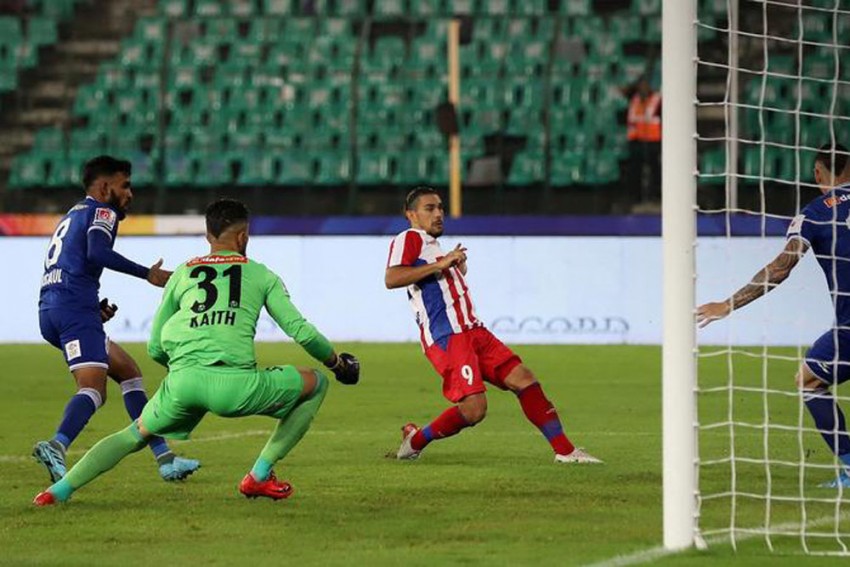 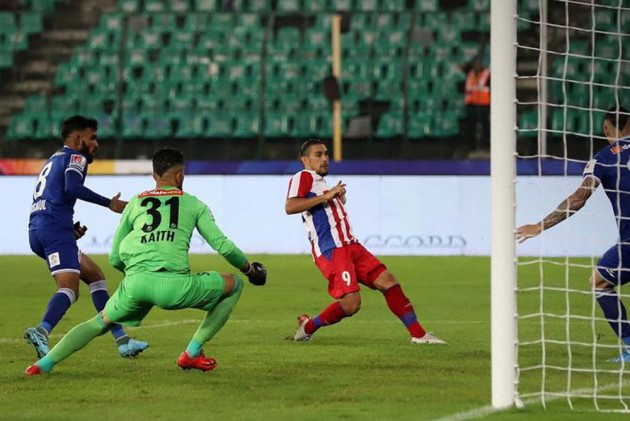 David Williams scored the solitary goal of the match as ATK edged past Chennaiyin FC in today's Indian Super League 2019-20 fixture, at the Jawaharlal Nehru Stadium. The hosts weren't poor but lacked the finishing touch as they missing plenty of opportunities. ATK have registered their second consecutive win and Williams has scored in his second straight match. Get here highlights of the ISL 2019-20 match between Chennaiyin FC Vs ATK here.

21:23 hrs IST: 95:00' And referee blows his whistle for full time. Its another defeat for Chennaiyin FC and another win for ATK. A good performance by ATK and by David Williams.

He puts in a screamer from outside the box, but it gets blocked and then deflected out of the box.

21:14 hrs IST: 86:20' OH MY! Freekick to Chennaiyin FC outside the ATK box. It could probably be their chance to score the leveler!

Chennaiyin FC work out a wonderful move with Thapa in the middle of it all. He puts in an excellent through ball for Schembri, who just needed to tap it but misses it. Poor effort.

20:55 hrs IST: 67:26' Chennaiyin FC are seeing more of the ball now, and its ATK who are sitting back and absorbing the pressure. If only the Marina Machans played like this in the first half, maybe they would have walked into halftime with a slender lead.

20:48 hrs IST: 59:48' A rare corner for Chennaiyin FC, its floats in for Vanspaul who is at the edge of the box. The former Chennai City man unleashes a piledriver but ATK goalkeeper Arindam dives and watches it go wide.

20:41 hrs IST: 52:53' The pressure is on John Gregory now. He might have led them to a ISL title, but his team has been poor since last season. And the poor form seems to have continued to this campaign too!

It's a chaotic Chennaiyin FC box, and the ball goes straight into the path of David Williams, who taps it in from point-blank range. Indian Super League's 1000th goal scored by David Williams.

20:32 hrs IST: The referee blows his whistle for second half. Chennaiyin FC will be hoping to put in a better performance and challenge ATK in this match.

20:18 hrs IST: HT' And the referee blows his whistle for halftime. ATK will need some time to think about the first half. They could have taken the lead but poor refereeing cost them. Meanwhile, Chennaiyin FC need to put in a better display and have been more or less very chaotic.

20:15 hrs IST: 43:17' Poor freekick by Chennaiyin FC. Anirudh Thapa puts in a ground pass, but its chaotic, and ATK comfortably clear it away.

20:13 hrs IST: 41:59' Freekick to Chennaiyin FC. Is this a moment, where they can break the deadlock and finally score a goal. Edwin Vanspaul gets clipped outside the ATK box, and gifts his side a set-piece.

20:11 hrs IST: 40:05' Its turning into a cagey affair. Both teams are battling it out, with ATK getting better chances. Also, Soosairaj is looking pretty lively tonight. Maybe, he will score a goal tonight!

Williams receives the ball at the edge of the Chennaiyin FC box, and puts in a ground cross from the left side for Krishna. The ATK forward puts in a venomous strike but the goalkeeper parries it away for a corner.

19:59 hrs IST: 27:35' Chennaiyin FC are playing a physical game; typical of John Gregory. He knows that ATK have a lot of flair and skill, and only a rugged approach can break them.

The ATK captain receives the ball near the half-line, and tries to put in a screamer. But its a poor shot, and it over the cross over.

Good combination between Thapa and Chhangte at the edge of the ATK box. Both play some one-two passes, and Thapa pulls the triggers but misses it.

19:52 hrs IST: 21:09' ATK are trying to slow down the game, as seen by their tempo. The visitors will keep more of the ball, but Chennaiyin need to strike at the counter and can't miss those crucial chances.

Good effort by the India international. He attempts his trademark move. He cuts in from the left and fires a shot but its straight at Arindam.

Roy Krishna receives the ball right next to the Chennaiyin goal, but Valskis puts in a tackle from behind and sends Krishna tumbling down. But the referee looks the other way.

Should have been a penalty.

19:43 hrs IST: 11:20' Its chaos in the Chennaiyin box, as ATK apply pressure. Anirudh Thapa tries to clear but invites pressure. Corner to ATK.

ATK clear the ball, and Chennaiyin go on a counter. Chhangte cuts in from the left and puts in an excellent pass, but Valskis taps it wide. Poor effort!

Vanspaul drifts into the right flank and receives the ball. He puts in a decent cross into the ATK box, and Valskis gets to it first. But his header goes over the bar. He should have done better.

19:32 hrs IST: 01:25' ATK are trying to cement some early control in the opening stages. You can see Habas' strategy, which has been finely implemented by his men. Roy Krishna will be key to his side, and could score once again!

19:30 hrs IST: And we kick-off at the Jawaharlal Nehru Stadium, as Chennaiyin FC hope to notch their first win of the season Vs ATK. Can John Gregory's side put in a top drawer performance tonight?

19:25 hrs IST: Both teams have lined up for the national anthem and other formalities.

19:21 hrs IST: A win will take ATK to top of the ISL table tonight, but with an extra game played. Meanwhile, Chennaiyin haven't been able to register winnings points yet.

19:14 hrs IST: The spectators in Jawaharlal Nehru Stadium also gave a loud cheer to local lad Michael Soosairaj after his name was announced! Can he shine tonight for ATK?

19:11 hrs IST: The last two encounters between both sides have been epic ones. Both ended with a 3-2 scoreline. Can we expect another cracker of a match this time too?

18:35 hrs IST: Chennaiyin will depend a lot on striker Nerijus Valskis. The Lithuanian was pretty good against Mumbai City. Although he failed to convert his chances, ATK will need to be cautious.

Meanwhile, defender Lucian Goian is a veteran in Indian football now, and will need to lead the backline with intelligence. Also, Anirudh Thapa will apply the creativity for his side, with Lallianzuala Chhangte utilizing his electric pace.

ATK will be relying heavily on new acquisitions David Williams and Roy Krishna for goals. Edu Garcia will be the midfield's pivot, and Michael Soosairaj will lead the Indian brigade.

18:11 hrs IST: In their previous fixture, Chennaiyin were held to a 0-0 draw against Mumbai City at home.  Click HERE for the match report.

18:00 hrs IST: ATK and Chennaiyin have played against each other 12 times, with the former notching five wins, while the latter has registered three victories. Meanwhile, four matches have ended as a draw.

17:53 hrs IST: ATK were on fine form against Hyderabad FC, crushing them 5-0. New acquisition Roy Krishna and David Williams registered their names in the scoresheet. Click HERE for the match report.

17:34 hrs IST: Good evening everyone! Welcome to Outlook's Indian Super League live coverage of Chennaiyin FC Vs ATK. The hosts will be aiming for their first win of the season. Meanwhile, ATK will be hoping to continue their fine form. Here is the match preview:

The Marina Machans will be hoping to change their fortunes in front of goal, something which has haunted them since last season. The hosts have a fully-fit squad with Germanpreet Singh back to the roster. Veteran Jeje Lalpekhlua is till out of action. Meanwhile, ATK will be without Jobby Justin, due to suspension.

Speaking about his side's lack of goals, Chennaiyin head coach John Gregory said during the pre-match press conference, "In the last game, we had chances to score, we should’ve scored a goal or two in the first 15 minutes. The keeper made an outstanding save of Rafael (Crivellaro) and even in the dying minutes of the game, we came close. I’m happy with the fact that we’re creating chances and that is what is most important for me."

Meanwhile, Antonio Lopez Habas praised his team. "Physically, we are about 75-80% there. We have been playing well and I am happy with the performances of the team so far. I think the precision and the effort from the players has been fantastic," he said.