Odisha FC notched a narrow win against Hyderabad FC in the 2019-20 Indian Super League fixture at the Shree Shiv Chhatrapati Sports Complex Stadium, on December 11. Here are the highlights of the ISL match between Odisha FC (OFC) Vs Hyderabad FC (HFC) 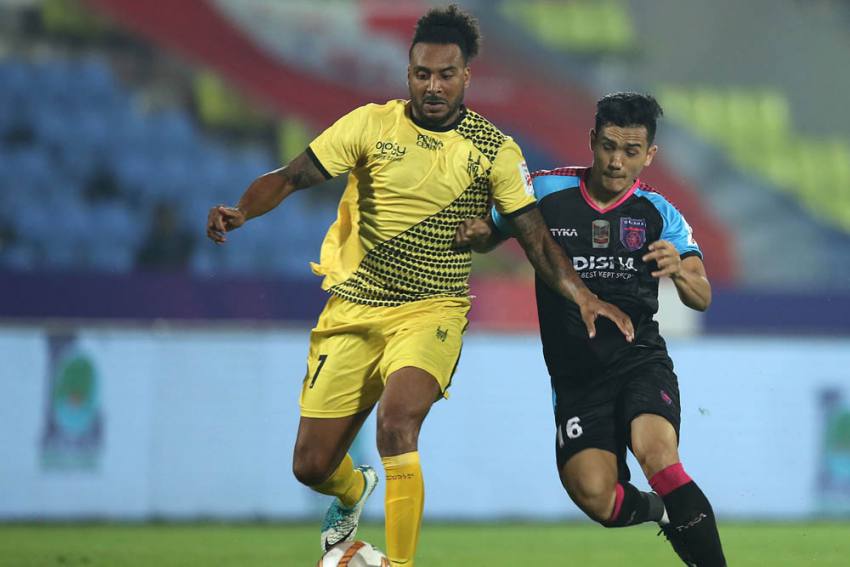 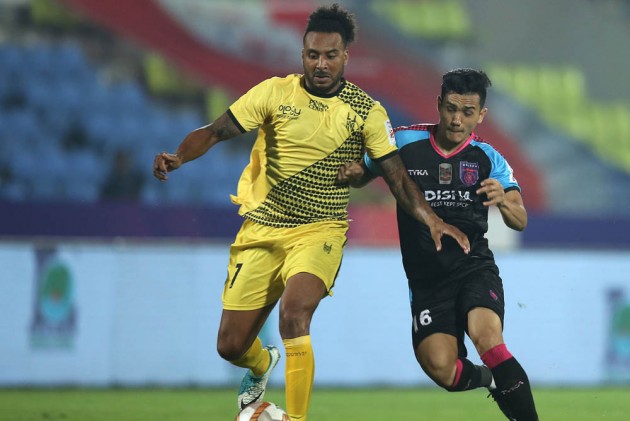 21:27 hrs IST: FT' And the referee blows his whistle for fulltime. Odisha FC registers a narrow win against Hyderabad FC in their 2019-20 Indian Super League encounter. The win has given a lifeline to the hosts, but its another disaster for the visitors.

21:07 hrs IST: 77:38' Hyderabad are trying to create something, but Odisha have been resilient, and are not letting the visitors find any loopholes. The likes of Adil Khan and Bobo have been poor for Hyderabad.

Guedes plays the super sub and converts the penalty with ease. It was a foul by Barnes, which led to the penalty.

Handball by Vinit Rai, and the referee gives him his second yellow of the match, thereby sending him off. Rai has given Hyderabad a lifeline!

AND BOBO CONVERTS IT WITH EASE! GAME ON!

20:44 hrs IST: 55:20' Adil Khan could have done better than that. A long freekick comes into a crowded Odisha box, and it falls for Adil, who heads it straight at Arshdeep.

Oh, that was poor placement by Xisco. Jerry plays him in with a delicious through ball, but Xisco places it wide! He could have grabbed his fifth goal of the campaign.

20:33 hrs IST: And the referee blows the whistle for the second of tonight's 2019-20 Indian Super League fixture between Odisha FC Vs Hyderabad FC.

20:18 hrs IST: HT' And the referee blows his whistle for halftime. Odisha FC walk back to their dressing rooms with ease after a half, where they scored two goals compared to Hyderabad's nil.

That was great transitional play by Odisha, with Jerry putting in a delicious cross for Xisco, to slot it past Kamaljit.

That was a good layoff by Bobo, as Rai runs in from the right flank and puts in a great strike! But Arshdeep is equal to it, and parries it away for a corner.

It was a corner kick, and Delgado found himself in the middle of a chaotic Hyderabad box, and headed it past the goalkeeper!

19:53 hrs IST: 20:59' That was a good play by Hyderabad as Barnes and Singh combine well, and the former puts in a cross. Poojary is at the end of it, and puts in a decent header, but it misses the goal by a whisker.

Hyderabad's big signing attempts a shot and sees it go above the crossover. Good effort by the Brazilian, and he needs to prove his worth tonight.

19:44 hrs IST: 12:18' Sarangi clears it away for a Hyderabad throw-in. The visitors are trying to keep control of the ball, and are suceeding in doing so. Odisha need to prevent that.

19:37 hrs IST: 05:26' Both teams are battling it out in the middle of the park. The past few minutes has seen a lot of sparring and attempts at keeping possession in both halves.

19:33 hrs IST: And we kick-off tonight's 2019-20 Indian Super League match between Odisha FC and Hyderabad FC. Both teams will be looking for a win after a poor start to this season.

19:25 hrs IST: Both teams are walking into the field for the pre-match formalities.

19:13 hrs IST: Hyderabad FC's Bobo will need to raise his game tonight! Against FC Goa, he only attempted two shots, which is not enough for number nine. The 34-year-old forward has played for the likes of Besiktas and Gremio. The Brazilian brings in tons of experience and needs to rescue his side.

19:03 hrs IST: Both managers are under a lot of pressure. Josep Gombau needs to bring in some tactical changes, and needs to shift from a pragmatic approach. Also, Phil Brown needs to play a lethal player upfront. Both sides have only won one match this season, and need to overturn their respective fortunes.

18:54 hrs IST: Kamaljit Singh and Arshdeep Singh will also have a huge task in hand. The opposing goalkeepers will be aiming for a clean sheet for sure and will be difficult to beat by the strikers.

Also, the live streaming will be available on Hotstar and Jio TV.

18:29 hrs IST: Jerry Mawihmingthanga will have an important role to play for Odisha FC tonight. The 22-year-old midfielder has scored a goal and notched three assists in seven games for his side, and will have a big say tonight too!

18:22 hrs IST: Both Odisha FC and Hyderabad FC need to work on their shooting boots. Strikers from both teams have been poor in clinical terms. Robin Singh could feature in today's match for the visitors due to the suspension of Marcelinho.

Both sides haven't found their feed in the ongoing ISL season, with Odisha FC stuck at seventh position, with six points. Meanwhile, Hyderabad are last in the ten-team table, with four points. Both sides have played seven matches until now. Also, both teams have lacked a clinical edge in front of goal, scoring only two goals in their last four fixtures.

Ahead of the match, Odisha FC head coach Josep Gombau discussed about his tactical style, bordered around a pragmatic approach, which has seen his team only notch one point in their last four matches.

Also, the home side's conversion rate has been poor, considered the huge amount of chances created.

"Tomorrow is a crucial match. It is a massive game for us. It’s all or nothing. We are with a chance to get to nine points and we are close to fighting for the play-offs as well. It is important to take this mentality and not add pressure on yourselves," he said.

Hyderabad FC will be aiming to bounce back from the recent 1-0 defeat Vs FC Goa. Also, the side will be without talisman Marcelinho, due to suspension. Ahead of the match, head coach Phil Brown spoke about Odisha FC and said that his team can overturn their recent run of form.

"We respect Odisha, their coach and players, but we are just round the corner from a good run. As a coach, it's my responsibility to make sure that players don't get frustrated with results because of the way we play but I don't think they are [frustrated]," he said.

"Odisha enjoy keeping possession in their games but possession doesn't necessarily win you games, taking the opportunities certainly does and that's what we will be trying to do tomorrow (Wednesday) night," he added.