Top Seed Vinesh Poghat's campaign in Tokyo Olympics came to a disappointing end after a loss in quarterfinals. Catch the highlights here

The wrestlers took the centrestage but only Ravi Kumar Dahiya was able to add to the medal tally for Indians at Tokyo Olympics on Thursday. Although Dahiya missed a golden chance of winning gold and settled for silver, biggest disappointments came from Vinesh Phogat who lost in quarters, while sloppy Deepak Punia lost the bronze medal match in last few seconds. But the men's hockey team reclaimed a slice of glory when they beat Germany 5-4 in the bronze medal match. Golfer Aditi Ashok also remained in medal hunt after a great Round 2. India now have five medals so far -- Mirabai Chanu and Ravi Kumar Dhaiya's silver, and bronze medals from, Men's Hockey team, Lovlina Borgohain and PV Sindhu. Get highlights of Indians at Tokyo 2020 here. 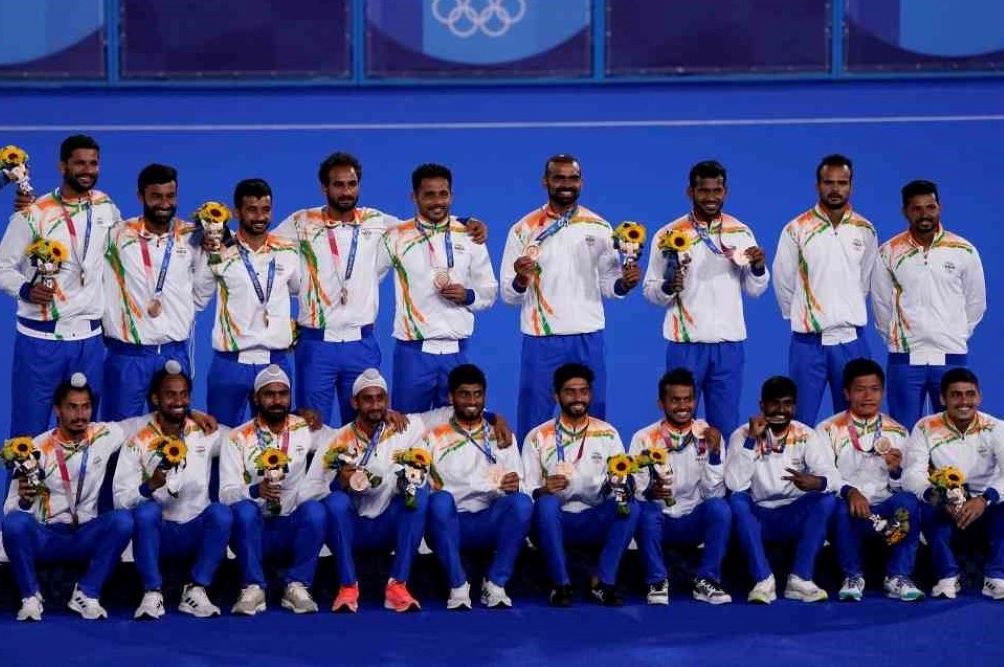 The India men's hockey team poses for a photo with their bronze medal after taking third place in the men's hockey event at the 2020 Summer Olympics, Thursday, Aug. 5, 2021, in Tokyo, Japan. Photo: AP Photo/John Locher

Nazem Myles Amine of San Marino takes down Deepak Punia in the last few seconds and wins bronze. Deepak will be disappointed as he was too defensive towards the end after taking 2-1 lead.

Deepak Punia was on defense at the start but then attacks and takes two points lead over Nazem Myles Amine of San Marino.  Punia is leading 2-1 at first break

Ravi loses the final bout 4-7.  Russia takes gold, while India wins silver. Ravi was outplayed by the two-time world champion Uguev. Ravi has though equalled Sushil Kumar's effort in 2012 London Olympics. Up next Deepak Punia has a chance of winning bronze medal in 86kg weight category

Ravi has been pushed out of bounds twice by Uguev to get two points. But Ravi attacks India is back level. Uguev wins two points and at first break ROC wrestler is leading 4-2.

Ravi Dahiya enters the arena followed by Uguev is in blue

We are minutes away now. Can Ravi Dahiya better Sushil Kumar and become the most successful wrestler in Indian history

This will be followed by: Men's freestyle 86kg Bronze medal match
Deepak Punia vs Nazem Myles Amine of San Marino

At the intermediate mark (10km), India's Sandeep Kumar is 12th. Rahul and Irfan are 47th and 50th respectively.

Indian trio of KT Irfan, Rahul Rohilla and Sandeep Kumar are in the chasing pack as Japan's Toshikazu Yamanishi leads the 57-man field after two kilometres.

11:00 AM IST: India hockey captain dedicates bronze medal to COVID "warriors who have saved so many lives."

Aditi Ashok remains in medal contention. Currently T2 as the action continues in Round 2. Compatriot Diksha Dagar T54. Medal to decide on Saturday (August 7) after the fourth and final round.

World record holder Ryan Crouser sets a new Olympic record with a throw of 23.30m to make it 1-2 for USA. Joe Kovacs take silver ahead of New Zealand's Tomas Walsh.

Vinesh Phogat beat Sofia Mattsson of Sweeden by points (7-1). And the Indian wrestler in the quarters.

Anshu Malik suffers a 1-5 defeat against Valeria Koblova of ROC.

Here's a look at India's line-up for the match

Ravi Kumar Dahiya has assured India of a silver but can he go one better than Sushil Kumar who won silver at London 2012? In his first Olympics, Ravi Kumar Dahiya has show great resilience and the stomach to fight till the last. This was evident in his semifinal bout against Kazakhstan’s Nurislam Sanayev on Wednesday. Ravi Kumar Dahiya's come-from-behind win will give the Asian champion 57 kg champion great confidence going into the final match against ROC’s Zavur Uguev, a two-time world champion.

Vinesh Phogat will grab a lot of attention given her form this year. She is the top seed in the women's 53kg freestyle category.

The 26-year-old Vinesh Phogat is a two-time Commonwealth Games champion and has also won gold at the 2018 Asian Games. She won bronze in the 2019 world championships to qualify for the Tokyo Olympics.

The Indian men's hockey team will play for the bronze medal against Germany. It was in Munich in 1972 when India had last won a bronze. In Tokyo 2020, India lost to Belgium in the semifinals while Germany were beaten by Australia.