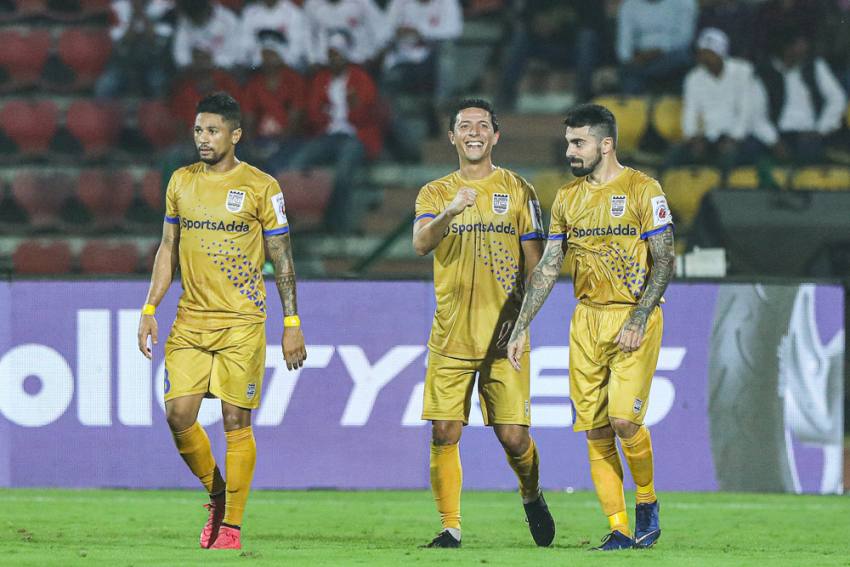 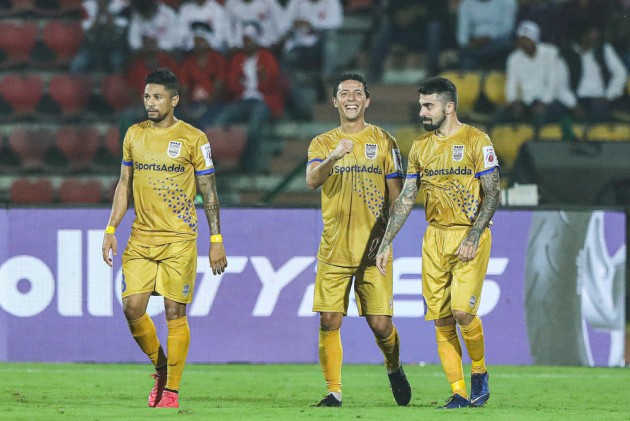 THIS IS INCREDIBLEEEEE!!!! ROWLLIN BORGES GIVES MUMBAI CITY THE LEAD!!

It was a corner from the right side, and Borges guided it past Gurpreet!

Its a goal, and Chhetri scores the equaliser for Bengaluru, and Amrinder can't do anything to deny him from the spot.

It is Diego Carlos, who possibly scores the winner for Mumbai City. Raynier puts in an amazing cross from the left flank. Ashique doesn't spot the move of Diego, who is there in the far post and heads it past Gurpreet.

It has taken Bengaluru FC an own-goal to equalise, with Grgic shouldering it past Amrinder!

Oh! That was close. An amazing curled shot by the Bengaluru man from outside the box, only for Amrinder to parry it away for a corner.

20:43 hrs IST: 50:00' Bengaluru FC have found 43% of their goals this season. Can the hosts find their equaliser in such manner tonight?

20:38 hrs IST: And the referee blows his whistle for the second half. Can Bengaluru FC find the all-important leveller against Mumbai City?

20:24 hrs IST: HT' And the referee blows his whistle for halftime! It has been an excellent match with complete end-to-end action. Mumbai City lead, but Bengaluru FC have an entire half to level the scoreline!

Tremendous work by Gurpreet as he saves Larbi's spot-kick which goes straight at the bottom left corner!

20:15 hrs IST: 41:33' Bengaluru are trying to build up some momentum but the Mumbai midfield and backline is too watertight. Also, most Bengaluru attacks are lacking a clinical edge, leading to electric Mumbai City counter attacks.

Excellent save by Gurpreet, as the Mumbai man unleashes a lethal shot from a tight angle only for the India international to parry it away for a corner.

19:56 hrs IST: 22:29' Mumbai are more adventurous currently with the ball, meanwhile Bengaluru have been a little too stagnant. Chhetri has been more or less absent in the match.

Bose pops up, and heads the ball past Gurpreet! Larbi put in a flat corner kick for Mumbai, which got cleared away, but it soon found its way to Larbi in the left flank. He puts in a delicious cross and Bose makes a perfect run and scores!

19:42 hrs IST: 09:15' Excellent tackle by Larbi, as he slides and intercepts the ball away from Bengaluru, and gives it for a throw-in.

19:37 hrs IST: 04:20' Both sides are trying to battle it out in the middle of the park with plenty of quick passes around the flanks.

19:32 hrs IST: And we kick-off at the Sree Kanteerava Stadium for tonight's 2019-20 Indian Super League fixture between Bengaluru FC Vs Mumbai City. Can the hosts win and leapfrog to top spot?

19:20 hrs IST: Amine Chermini is once against starting for Mumbai City. The Tunisian is currently his side's top scorer this season with four goals. He will be needed to once again bring in his a-game tonight.

18:54 hrs IST: Bengaluru FC will be relying a lot on Sunil Chhetri, who is also their top scorer this season. The India national team captain is amongst the best in the league, and could very well register himself in the scoresheet tonight.

18:23 hrs IST: The teams have already reached the stadium earlier. Now around an hour is left for the match to begin.

18:11 hrs IST: Yesterday, FC Goa climbed to the top of the ISL table after a 2-1 win over ATK. The Gaurs are currently in pole position with 15 points off eight games, with ATK at second with 14 from eight. Meanwhile, Bengaluru are third with 13 off seven. The hosts have a chance to leapfrog Sergio Lobera's side and climb to top spot tonight!

Here are the highlights from yesterday's match: CLICK HERE.

17:00 hrs IST: Good evening and welcome to Outlook's live coverage of the 2019-20 Indian Super League clash between Bengaluru FC Vs Mumbai City, at the Sree Kanteerava Stadium. The match kicks-off at 19:30 hrs IST. The hosts will be aiming to grab all three points, but they up against a tough opposition, who have had an erratic run this season.

After a slow start to their campaign, the defending champions have slowly crawled back, and are currently third in the league table, with 13 points from seven matches. Meanwhile, the visitors are eighth in the ten-team standings, with seven points from seven fixtures.

Carles Cuadrat's Bengaluru FC have only conceded two goals this season, with one of them coming from a penalty. The hosts also have the best defensive record currently. The team's cohesive backline is led by the likes of Gurpreet Singh Sandhu, Juanan and Albert Serran.

Bengaluru FC have also conceded only in away matches.

Ahead of the match, Cuadrat revealed that his team is cautious of Mumbai City. "I think Mumbai have a few new players, but the soul of the team is the same. I trust my players and my team to do a good job. We have made it tough for teams to score against us, and we aren’t a good opponent to play against," said the Spaniard.

Mumbai City have been experiencing a six-game winless run. Inconsistent, but the team has maintained a good away form, with an unbeaten run away from home. To register a win, Jorge Costa will rely on Amine Chermiti, with the Tunisian having scored four goals this season.

Ahead of the match, Costa said, "It's true that in the last games we did not lose but we did not win. We performed enough to win the games so tomorrow we need to continue like this with quality and a little bit of luck."

"With all respect to Bengaluru, we are speaking about the champions. We will respect Bengaluru and all the teams but we want to play with quality and do our best to win the game," he stated.