FC Goa strolled past an Odisha FC who lost three players to injuries in their 2019-20 Indian Super League match at the Fatorda Stadium, Catch highlights of the ISL football match between FC Goa (FCG) Vs Odisha FC (OFC) here 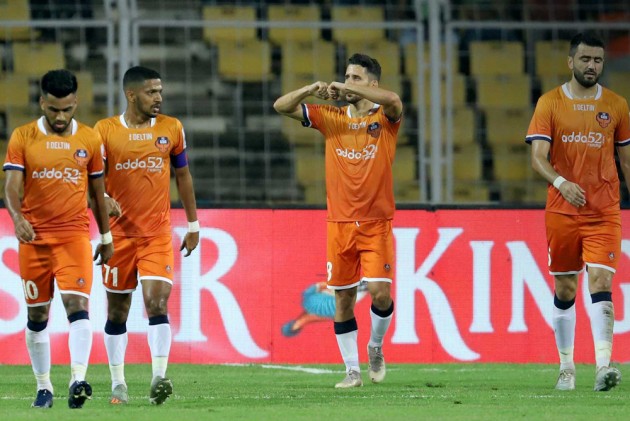 Ferran Corominas proved his mettle once again as he scored two goals (19', 89') to help FC Goa register a comfortable against Odisha FC in their 2019-20 Indian Super League fixture at the Fatorda Stadium. In a 3-0 win, Brandon Fernandes (85') was the other goalscorer. Catch highlights of the ISL football match between FC Goa (FCG) Vs Odisha FC (OFC) here.

21:25 hrs IST: FT' The referee blows his whistle for fulltime! FC Goa register a comfortable win against Odisha FC in their 2019-20 Indian Super League fixture. Odisha put up a great fight, but losing key players in the first 49 minutes due to injures cost them the game. FC Goa now climb to the top of the league table.

The Spaniard scores his second for the night, and his sixth of the season! It was a calm composed penalty. He lifted it away from Arshdeep at the left side.

Arshdeep completely misread it as Brandon Fernandes tame shot from outside the box, goes in. He basically dived away from it. Unfortunate!

Aridane knows he should have done better, as Narayan puts in a good cross from the left flank, but the big man heads it straight at Nawaz.

Good save by Arshdeep. It was Romeo who gave away the ball for Odisha. Then Coro squeezed in a delicious through ball to Edu Bedia, courtesy of a Tebar deflection. But Bedia tries to tap it in, and Arshdeep does brilliantly.

20:59 hrs IST: 69:09' Odisha are trying to gain control in midfield and are doing well. Edu Bedia has been bought in to shore up Goa's possession, and has been doing it judiciously. Can Odisha find the much-needed equaliser?

That was a deft touch by Coro, as he let Doungel free. The India international put in a ferocious shot, but Arshdeep blocked. Good save!

A cross comes into the Goa box, and Xisco heads it at the bottom left corner, but Nawaz dives and parries it away for a corner.

20:39 hrs IST: 49:23' Romeo comes in for Jerry, as the Odisha FC is out injured now. The visitors have used all three of their substitutes.

20:35 hrs IST: The referee blows his whistle for second half as FC Goa begin the second half against Odisha FC. Also, Xisco replaces an injured Diagne.

20:19 hrs IST: HT' And the referee blows his whistle for halftime, as FC Goa enter halftime with the lead, and Odisha have a lot of work to do. And also Diagne is doubtful about returning in the second half, as a knock from Brandon has left him in discomfort.

Boumous dribbles past players once again and runs straight at the Odisha box, with plenty of Goa players free. But the Frenchman attempts to take a shot and it hits Tebar's hand. But the referee doesn't award a penalty.

20:01 hrs IST: 29:45' Brandon has been better than Jerry until now. The latter has been losing the ball a lot. Also, Brandon has put in four crosses compared to Jerry's three.

19:55 hrs IST: 21:00' Also, Len Doungel comes in for Jackichand Singh. The FC Goa man has mot been able to rub off the knock received from Narayan Das.

Jerry lost the ball in the middle of the park, and then it was a simple tap in by Coro. Assist by Boumous from right side in the Odisha box.

19:49 hrs IST: 17:18' Aridane has scored four goals from six attempts on target and has also provided an assist. He will be a tough task for the FC Goa defenders.

19:44 hrs IST: 12:22' FC Goa are controlling the game right now, and are spraying the ball around. Brandon is running around in dangerous areas and has been tricky with his passes.

Oh, that was close. Hugo Boumous runs at players and unleashes a shot, which takes a big deflection, and just goes wide with Arshdeep scampering.

19:32 hrs IST: And the referee blows his whistle for kick-off, as Odisha FC begin the match at the Fatorda against FC Goa in today's 2019-20 ISL fixture.

19:22 hrs IST: Both teams are walking into the field now for the pre-kickoff formalities at the Fatorda Stadium. Dessai leads Goa, Tebar leads Odisha.

19:18 hrs IST: Jerry has four assists this season, meanwhile Brandon has five. Both have been excellent, with the FC Goa man having established himself as a regular international. Can Jerry make his way to the national team this season?

19:13 hrs IST: Also, Nawaz and Arshdeep will need to be cautious tonight, considering the strikers on either side. It will be Corominas Vs Arshdeep and Nawaz Vs Santana tonight!

19:02 hrs IST: Jerry will have a huge role to play for Odisha, as his side's main creator of chances. His crosses from the right flank has been fantastic this season, and he could be the game-changer for his side tonight.

18:55 hrs IST: So it is confirmed that Ferran Corominas starts tonight for FC Goa. The Spanish striker is back after some fitness issues, and it looks like Boumous and Brandon will be linking up with him upfront. What impact can his return have for the FC Goa team?

18:38 hrs IST: The FC Goa team also arrived sometime ago. Can Sergio Lobera's side challenge for the title this season?

18:30 hrs IST: FC Goa's Brandon Fernandes will have a huge responsibility of being his side's main creative force. The India international has blossomed as a player under Sergio Lobera and has become a star in the ISL.

18:16 hrs IST: The Odisha FC team has arrived!!! Can Josep Gombau lead his side to a thrilling victory against FC Goa at the Fatorda?

18:00 hrs IST: Sergio Lobera and Josep Gombau play a similar brand of football; the Spanish possession philosophy. Although, Lobera's style has worked in the ISL, due to a better squad of players, as compared to Odisha FC. It will be a big test for Gombau's resolve, and he will be aiming for atleast a draw.

Although Corominas has played less matches than Odisha's Santana, he still has the same amount of goals. The 2018-29 top scorer will be aiming to show his brilliance having a missed a few matches due to fitness issues

The match will see two Spanish gaffers – Sergio Lobera and Josep Gombau – face each other and have similar tactical ideas. The Gaurs are currently second in the league standings with 15 points from eight games, while Odisha are seventh with nine points.

FC Goa have the second-best attacking team this season (15 goals), and will be aiming to destroy Odisha's shaky defence, especially during set-pieces. Lobera will be relying a lot on Hugo Boumous, Brandon Fernandes for the goals. Meanwhile, Ferran Corominas could also return from injury.

Ahead of the match, Lobera said, "I think it is important to keep possession and have the ball as much as possible. We did not have the ball too much in the last few matches. Odisha are playing very well. I saw their matches and they are a good side."

In an abysmal season, Odisha will be missing star midfielder Vinit Rai due to suspension. Gombau will be depending a lot on striker Aridane Santana, who has scored four goals this season. Ahead of the match, he said, "It is important to have the ball against Goa. They like to have the ball and if they do not have it, they will suffer more."

"It is also important that we make not many mistakes as they have the quality to punish us. We have a gameplan. We have worked well. I hope it will be a good game. They will have to work a lot, if they have to beat us," he further added.