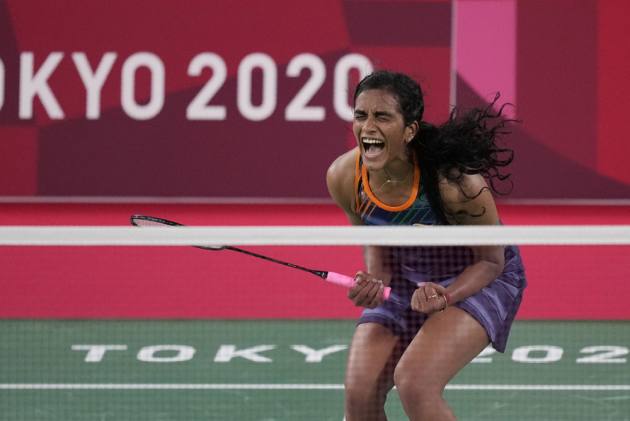 History made in Tokyo! PV Sindhu, the poster girl of Indian badminton and the reigning world champion, became the first-ever female athlete from the country to win back-to-back Olympic medals on Sunday. For the record, wrestler Sushil Kumar, now languishing in jail, was the first and only other Indian to win two Olympic medals at Beijing and London Games. Playing probably her best match at Tokyo Olympics, Sindhu dismantled China's He Bing Jiao in straight games to collect the women's singles bronze medal. She won the silver medal five years ago in Rio. India already has a silver medal courtesy, weightlifter Mirabai Chanu then boxer Lovlina Borgohain assures at least bronze Catch highlights here:

6:57 PM IST: Pullela Gopichand's reaction: "Congrats to our awesome Sindhu on her 2nd successive Olympics medal. While it is all due to the hard work by her and the team of coaches and support staff."

6:45 PM IST: After her win, PV Sindhu told BWF: "I'm on cloud nine. I'm going to enjoy this moment. My family have worked hard for me and put in a lot of effort so I'm very thankful. And my sponsors have given me their best so I'd like to thank them and enjoy the moment."

Five match points for PV Sindhu with a smash. And with a push to He Bing Jiao's left, she collects the bronze medal. She takes 53 minutes to dismantle the Chinese girl.

PV Sindhu points away from her second Olympic medal. He Bing Jiao makes a brave return and she wins. Then, sends one wide on Sindhu's left.

He Bing Jiao is not giving up. Plays a smash shot down the line. Then, the Chinese girl makes an error in judgement. On the line. Sindhu takes a three-point lead.

He Bing Jiao crashes a return. But she makes amend with a precision push to PV Sindhu's right. Then another, at the same spot. Sindhu is guilty of letting it go. Sindhu however has enough power left and she injects one, another cross-court winner.

PV Sindhu wins back-to-back points to wrestle back the initiative. Then, she produces another cross-court winner.

Brilliant rally. Looks like PV Sindhu's winning it. But she forgets to follow up to pick a drop shot. And Sindhu challenges a long call. Sindhu loses challenges.

Scintillating once again from PV Sindhu. Takes a giant leap and beats He Bing Jiao with a cross-court smash. Mini-break.

Long from He Bing Jiao and PV Sindhu takes a three-point lead. Then, the Chinese girl drops one with perfect control. Net play at its best.

PV Sindhu is having a whale of a time with her power game, which she missed yesterday. But He Bing Jiao restores some sort of parity with a nice point.

What a smash from PV Sindhu. The sparse crowd in attendance makes enough noise to appreciate it. He Bing Jiao wins her fifth point as Sindhu crashes into the net. Another body smash then a cross-court.

He Bing Jiao produces a nice little push to win her second point of the game. Then, sends the next one wide on Sindhu's left. He Bing Jiao however wins back-to-back points.

He Bing Jiao looks rattled. Series of unforced errors from the Chinese shuttler.

He Bing Jiao wins a point with a smash, but she sends it long in the next point. A beauty of drop shot and game point for PV Sindhu. But she sends a return very long. And He Bing Jio sends her return wide. Sindu takes game 1.

Brilliant play from PV Sindhu to rattle the Chinese camp. Sindhu first produces a smash on He Bing Jiao's right then kills off with a cross-court push. Sindhu follows it up with a cool drop shot.

He Bing Jio breaks PV Sindhu's run, but the Indian responded with a killer smash. No retrieving this time. The Chinese girl misses the line and it's a healthy lead for Sindhu.

Looks like a wide serve from PV Sindhu, but it's fine. He Bing Jio fails to keep the return in play. Another unforced error, into the net, and Sindhu increases the lead to six points.

Unforced errors galore at the net from both the players. PV Sindhu then produces a power smash to the left of He Bing Jio.

He Bing Jio wins a mini-battle at the net to take lead. But she crashes one into the net. Sindhu then takes a two-point lead, only to lose another rally.

Another set of intense rallies as He Bing Jio beats PV Sindhu with a slice shot. Then, an immaculate push. Another cross-court shot. Now, it's 5-5.

Back-to-back points for He Bing Jio as Sindhu plays one into the net.

Fascinating rally to start the match. And Sindhu wins it with a deceptive drop shot. He Bing Jio then unsuccessfully challenges a line call. Then an unforced error at the net as Sindhu takes a 3-0 lead.

4:59 PM IST: Both the players are ready.  He Bing Jio wins the toss and she chooses the far end of the court.

4:54 PM IST: Ai Teng Tan of Malaysia is the umpire for this big clash. Anh Nguyen of Vietnam will be the service judge.

4:43 PM IST: PV Sindhu is eyeing to become the first Indian female athlete to win back-to-back Olympic medals. He Bing Jio, meanwhile, is yet to win an Olympic medal. But she has won medals in almost all the major tournaments. In fact, she is a former Youth Olympic Games and World Junior Championships champion.

4:16 PM IST:  Here's a look at their previous meetings between He Bing Jio and PV Sindhu

On Saturday, the 26-year-old PV Sindhu lost her semifinal match against Tai Tzu-Ying 21-18 and 21-12. Tai Tzu showed brilliant touch and forced Sindhu into several errors. Tai Tzu has won everything except for an Olympic medal.

The PV Sindhu vs He Bing Jiao bronze medal should be a tightly contested affair. While Sindhu is the sixth seed, Bing Jiao is seeded eighth. But when top 10 players face each other, there are no favourites.

However, World No. 7 PV Sindhu has an inferior 6-9 win-loss record against the world No. 9 and 24-year old Bing Jiao. Sindhu, 26, won their most recent meeting at the World Tour Finals in straight games in December 2019 to end a string of successive losses (three) to the Chinese player.

"It’s a bit sad that I am not on the winning side (vs Tai Tzu-Ying) but I have one more match to go so I need to keep my tempo going, recover soon and come back tomorrow,” Sindhu said on Saturday, indicating how keen she was to be on the Tokyo 2020 podium.