Jonny Bairstow's second consecutive century and a three-wicket haul from Mark Wood helped England qualify for the semifinals of the ICC World Cup 2019 with a 119-run win over New Zealand at The Riverside, Chester-le-Street on Wednesday. Catch highlights of England vs New Zealand here 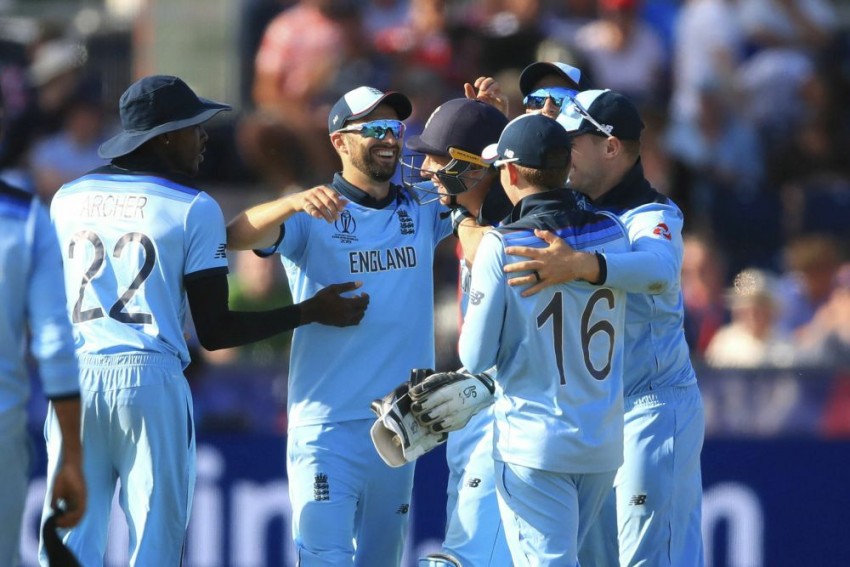 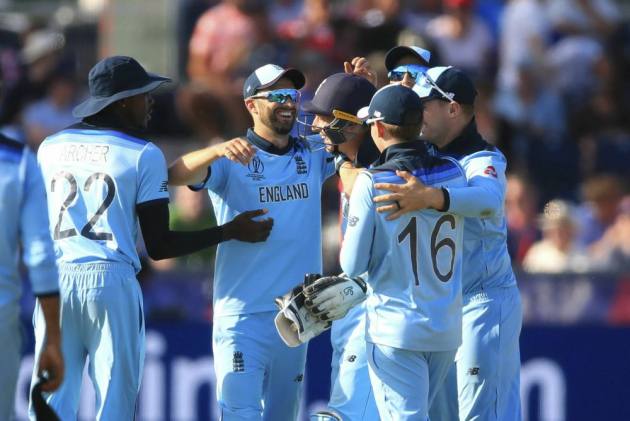 England stormed into the semifinals of the ICC World Cup 2019 for the first time since 1992 after Jonny Bairstow’s second successive century helped them secure a comprehensive 119-run win over New Zealand at The Riverside, Chester-le-Street on Wednesday (July 3). After opting to bat first, England rode on Bairstow’s 106 and Jason Roy’s 60 to post 305/8. In reply, New Zealand could only manage 186 as they suffered a third successive defeat of the tournament following losses to Pakistan and defending champions Australia. Get highlights of England vs New Zealand here. (SCORECARD | STREAMING | POINTS TABLE | FULL SCHEDULE)

Jonny Bairstow, Player of the Match: "Really pleased, we knew these were must-win games, the performances in a couple of games hadn't been quite up to scratch. On a different day we could have been bowling first, but the guys applied themselves pretty well. I think batting with Jason for a period of time helps. You understand each other's games and moods. NZ are a class side, so we needed to put in a performance today, and we're pleased to do that after a tough few weeks."

22:43 hrs IST: OUT! That's it. England register a comprehensive win over the Kiwis, qualify for the semifinals.

India's national T20 tournament will be held before the IPL players' auction in a slight revamp of the BCCI's mega domestic season comprising 2036 matches. The Syed Mushtaq Ali Trophy, the country's premier domestic T20 event, being pushed ahead is the only notable change in the 2019-20 domestic schedule announced on Wednesday.

22:25 hrs IST: OUT! Wood gets Santner, plumb in front! New Zealand are eight down. Matt Henry comes to the crease.

22:02 hrs IST: Woakes on with his eighth over. After taking a double off the second ball, Latham hits the third ball for a four. Santner follows it with a brilliant cover drive for another four. 11 runs from the over. NZ-164/6 after 38 overs.

If the Kiwis can this game deep, and even if they lose by a small margin, they will still have a better chance of qualifying than Pakistan, who have a negative NRR.

21:25 hrs IST: OUT! Back of a length delivery from Stokes, De Grandhomme goes for the pull shot but mistimes it and hits it straight to Root at deep square. New Zealand slide further. Mitchell Santner comes to the crease.

21:11 hrs IST: OUT! Back of a length delivery from Wood, outside off, stays a touch low, Neesham goes for the cut shot but gets an inside edge straight onto the stumps! Colin de Grandhomme comes to the crease. England closing in on semis spot.

20:40 hrs IST: OUT! Taylor has run himself out. Hits this to fine leg and goes for a second which wasn't there. Good throw from Rashid and Buttler does the rest. Taylor dives at full stretch but to no avail. James Neesham comes to the crease. New Zealand are 70/4 after 17 overs. Some spin now. Joe Root comes into the attack.

20:34 hrs IST: OUT! Williamson goes. This could be the turning point of the game! Wood gets a clear fingertip and no way the Kiwi skipper could've got back in at the non-striker's end. Unfortunate dismissal. Tom Latham comes to the crease. New Zealand are 68/3 after 16 overs.

20:21 hrs IST: Wood continues. Five runs from his second over, three singles and a double. New Zealand are 56/2 after 14 overs.

20:17 hrs IST: Plunkett continues. Fours singles from his second over. New Zealand are 51/2 after 13 overs. The Kiwis have scored 30 runs in the last five overs.

20:12 hrs IST: Another bowling change from Morgan. Mark Wood, right-arm fast bowler, on. Starts with a wide, then Williamson hits the second delivery for a boundary past backward point. New Zealand are 47/2 after 12 overs.

19:53 hrs IST: Just four runs off Woakes' fourth. A deliberate nick by Williamson between keep and slips leads to a boundary. New Zealand are 20/2 after 7 overs. Williamson 10*, Taylor 1*

19:48 hrs IST: OUT! Archer now has the most wickets (17) in a World Cup for England. He surpasses Ian Botham, who scalped 16 in 1992. Another failure for Guptill. New Zealand's opening issues continue. They are 16/2 after 6 overs. Ross Taylor comes to the crease.

19:28 hrs IST: OUT! Nicholls departs for first-ball duck. Nips in a bit, hits the Kiwi opener above the knee-roll. Decides not to review it (but later, DRS shows it was missing stumps). What a start for Woakes and England! Kane Williamson comes to the crease. New Zealand are 2/1 after the first over. Jofra Archer comes into the attack.

18:52 hrs IST: That's it. England finish on 305/8. Great comeback by New Zealand. Just 111 runs off the last 20 overs. The Kiwis took pace off the ball and bowled tight lines. Boult, Neesham and Henry were very good. We'll be back in about 30 minutes.

18:41 hrs IST: Boult finishes his spell (2/56). Nine off the over. Good running between the wickets from Plunkett and Rashid. England are 286/7 after 48 overs. Henry to bowl the penultimate over.

18:35 hrs IST: Eighteen off the last 12 balls and the wicket of Morgan. England losing wickets at regular intervals. They are 277/7 after 47 overs. Adil Rashid comes to the crease.

18:27 hrs IST: OUT! Full from Neesham, Woakes looks to drive inside out but hits it straight to Williamson at mid-off. The New Zealander ends with 2/41. England are 259/6 after 45 overs. Liam Plunkett comes to the crease.

18:12 hrs IST: OUT! Flatter delivery from Santner, on leg, Stokes comes down the track, looks to clear the long-on boundary but doesn't get the timing or elevation. He hits it straight to Henry, who completes a neat catch. Chris Woakes comes to the crease. England wobbling towards the end. They are 248/5 after 42 overs.

17:45 hrs IST: OUT! Buttler departs cheaply. After a stupendous start, England have lost 20/3 in 26 deliveries. Second wicket for Boult. He's happy. Ben Stokes comes to the crease. England are 218/4 after 35 overs. Southee comes back into the attack.

17:30 hrs IST: OUT! Full from Henry, wide of off, straightens a bit, Bairstow looks to drive through cover but gets a thick inside edge into the stumps. End of a wonderful innings from the England opener! Eoin Morgan comes to the crease. England are 206/3 after 32 overs.

17:21 hrs IST: OUT! Root goes for the pull but appears to get an edge. He's given out but he opts for the DRS. UltraEdge confirm a spike. There was some bat involved. New Zealand still can't breathe easy. Jos Buttler comes to the crease. England are 200/2 after 31 overs. Time for drinks!

17:15 hrs IST: FOUR! Second consecutive century for Bairstow. What a player! A high full toss from Southee, middle and leg, the Englishman clips it through square leg for a boundary. England are 194/1 after 30 overs. Boult comes back into the attack.

Root appears to have a nose-bleed. A slight delay

16:25 hrs IST: OUT! Fuller and straighter from Neesham, no footword from Roy, he looks to hit it over cover but finds Santner, who takes a simple catch. Good innings! He has laid the foundation for a big score. Joe Root comes to the crease. England are 124/1 after 19 overs.

Meet Chhote Nizam - Ambati Rayudu. He announced his retirement from international cricket today. The 33-year-old Rayudu represented India in 55 One day Internationals, scoring 1694 runs at an average of 47.05 and featured in six T20Is too.

16:12 hrs IST: Half-centuries for Roy and Bairstow. Also, they are the second pair to register three consecutive 100+ partnerships in a World Cup after T Dilshan and K Sangakkara (in 2015). England are 111/0 after 17 overs. Drinks are on the field now.

This player is likely to retire from international cricket after the World Cup, amidst rumors which have been churning for quite sometime. He has faced the brunt of criticism lately, due to his slow batting approach in the tournament. Read full story here

15:13 hrs IST: A couple of boundaries for Bairstow, both towards the cover region. Excellent start from England, just what Morgan would have been hoping for. This opening pair is majestic! England are 25/0 after 3 overs. Boult to continue.

15:08 hrs IST: FOUR! Too straight from Boult, down leg, Roy clips this away to square leg for a boundary. England are 15/0 after 2 overs. Roy 11*, Bairstow 0*. Tim Southee, playing his first competitive game in two months, comes into the attack.

15:03 hrs IST: FOUR! Full toss from Santner, outside off, Roy reaches for it and hits it wide of cover for a boundary. Easy pickings! England are 9/0 after the first over. Trent Boult comes into the attack.

15:00 hrs IST: Time for live action. Jason Roy and Jonny Bairstow to open. Mitchell Santner has the new ball. This was expected.

14:33 hrs IST: England have won the toss and have opted to bat

13:53 hrs IST: Meanwhile, New Zealand's Lockie Ferguson has a tight left hamstring and will miss today’s match as a precaution.

13:43 hrs IST: Trent Boult became the first bowler from his country to complete a hattrick in World Cup history, achieving the feat against Australia.

13:32 hrs IST: England's Liam Plunkett bowled a full 10-over allocation at a World Cup for the first time in his most recent match against India, taking his best figures ever in a World Cup game (3/55, econ 5.5).

13:24 hrs IST: New Zealand will be looking to avoid three consecutive defeats at the World Cup for the first time since 1979-1983.

13:19 hrs IST: STAT ATTACK - England have won three of their last four ODIs against New Zealand. It is a different story in their World Cup rivalry, where England won the first three meetings between the teams but have since lost five in a row.

England made a fine start by winning four of their opening five games, but defeats to Sri Lanka and Australia inflicted major blows. They were impressive in their previous encounter against India, with Jason Roy, Jonny Bairstow and Ben Stokes all scoring well.

Bairstow (111) and Roy, who made 66 following his return from a hamstring injury, put on 160 for the opening wicket before the in-form Stokes hit 79, his third successive half-century, to boost the total to 337/7.

England, bidding to win their first World Cup, then kept things tight in the field, with Chris Woakes and Liam Plunkett taking wickets in the middle overs.

"Winning a game like this, under the pressure we were under, can only stand us in good stead, potentially for the New Zealand game and hopefully after that," said Woakes.

New Zealand, on the other hand, also began the tournament in style, but losses to Pakistan and Australia hurt their progress.

An attack led by left-arm quick Trent Boult, who took a hattrick against Australia, and Lockie Ferguson is a testing proposition for any side.

Colin Munro was dropped for the Australia game, while Martin Guptill has managed just 85 runs from six innings since his half-century against Sri Lanka.

"We're still in charge of our destination and where we're heading, and that's always a nice thing to have," said Craig McMillan, New Zealand's batting coach.

"Obviously (Guptill and Latham) are short on runs but we're excited by the fact that we haven't quite clicked as a batting group yet."