A rampant David Warner sets up a 48-run win for defending champions Australia against a spirited Bangladesh side in their ICC Cricket World Cup 2019 group match at Trent Bridge, Nottingham on Thursday. Relive the highlights and score of the high-scoring AUS vs BAN match here. 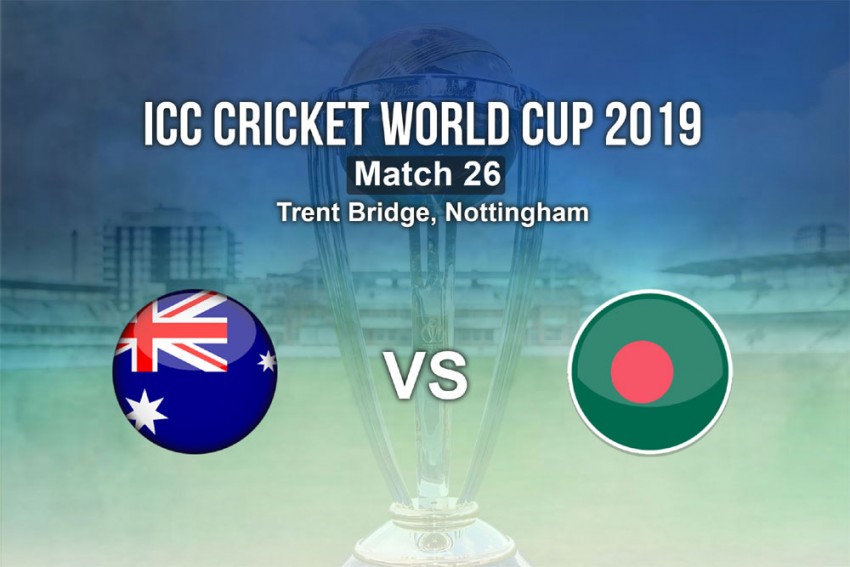 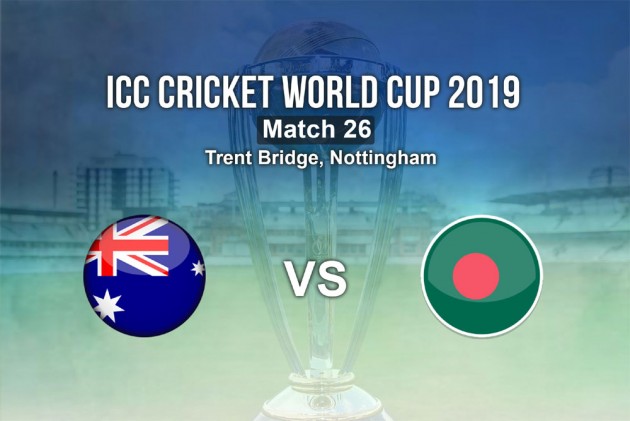 The winning margin for Australia, by 48 runs, may tell a different story, but Bangladesh were there for the most part of the match, giving a fight to the most successful side in the world. The difference between the two sides in the 26th match of the ICC Cricket World Cup 2019 were a couple of catches, dropped catches to be precise by the Tigers, and the last ten overs of each innings. Then, there's David Warner. Also, a target of 382 is a very big one for any team. Get the highlights and score here.
REPORT | SCORECARD | SCHEDULE | POINTS TABLE 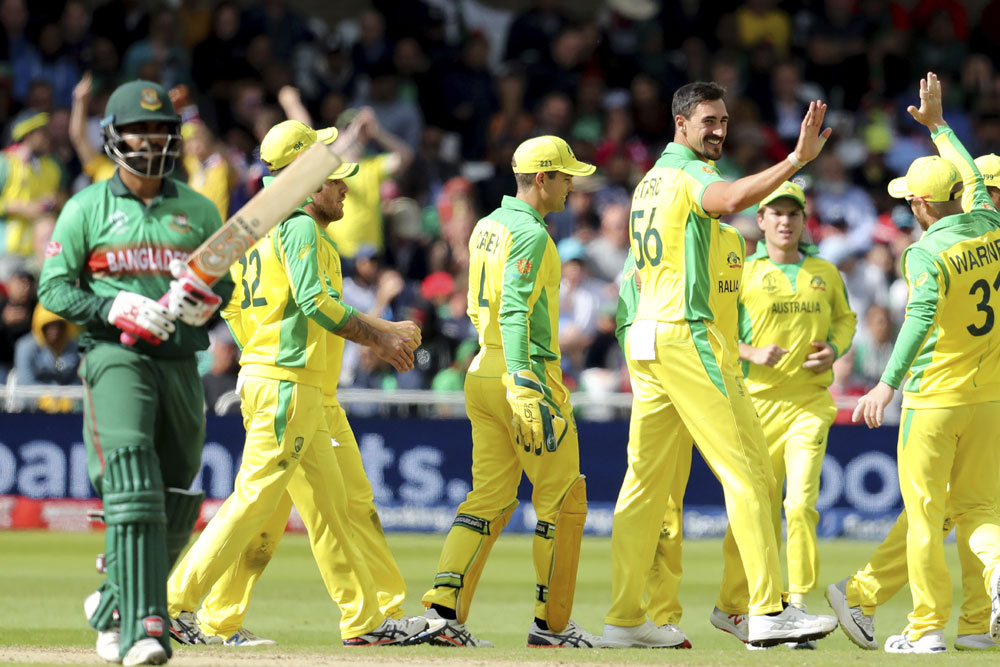 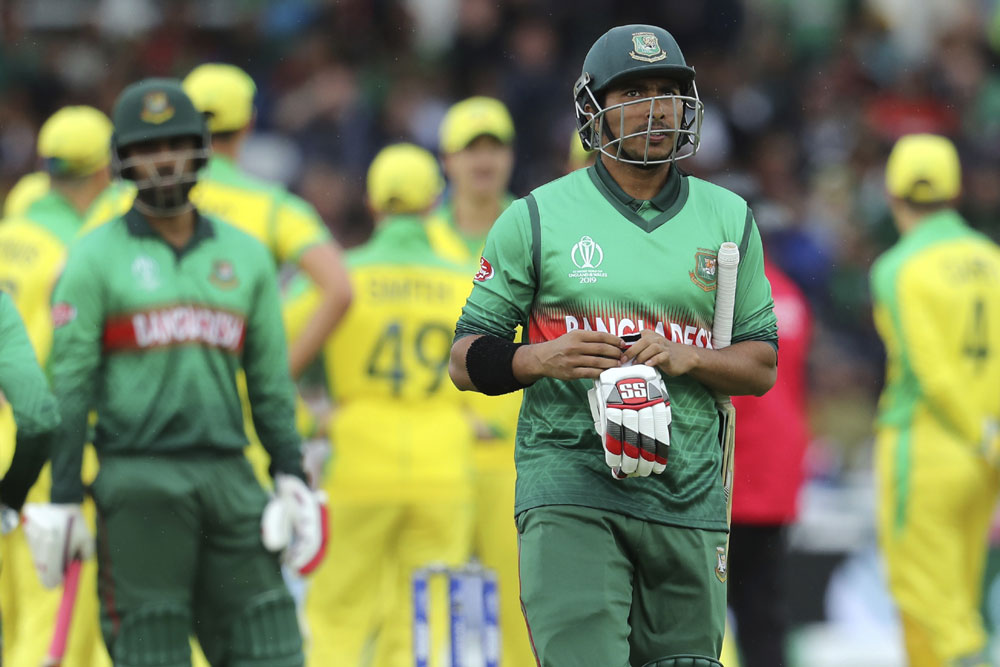 7:59 PM IST: Mitchell Starc continues. Four byes off the second ball as both Tamim Iqbal and Alexy Carey miss the ball. Then fatal mixed-up. Soumya Sarkar run out at the non-striker's end (10 off 8). A direct hit from Aaron Finch. FoW-BAN 23/1 (3.5). Four runs from the over. Shakib AL Hasan is the new man. BAN-23/1 after four overs.
7:53 PM IST:  Mitchell Starc continues. Soumya Sarkar hits the fourth and fifth balls for fours, with Pat Cummins slipping at fine leg to allow the second boundary. 10 runs from the over. BAN-19/0 after three overs.
7:48 PM IST: Pat Cummins, right-arm fast bowler, shares the new ball with Mitchell Starc. Soumya Sarkar takes a single. After a dot ball, Tamim Iqbal plays a delightful straight drive for the first boundary of the innings. BAN-9/0 after two overs.
7:43 PM IST: Mitchell Starc, right-arm fast bowler,  starts the second half proceedings. Two dot balls to Tamim Iqbal. The Bangladeshi opener plays the third ball to through cover for three runs. A single off the fifth as Soumya Sarkar guides it down to third man. Four runs from the over.
INNINGS BREAK
7:15 PM IST: And with that Australia have posted their second highest World Cup total. 417/6 against Afghanistan at Perth in 2015 is still the highest. 400 was clearly on sight, but a flurry of wickets towards the end of the innings proved detrimental to their plans.
7:09 PM IST: Mustafizur Rahman with the final over. After starting so well -- three singles, he concedes 13 runs from it with Marcus Stoinis hitting the fourth and fifth balls for fours. AUS-381/5.
7:04 PM IST: Players are out for the one remaining over in the Australian innings.
6:55 PM IST: The covers coming off! Play to resume soon.

Australia's innings will restart in 10 minutes. No overs have been lost, but the lunch break has been reduced to half an hour.#CWC19 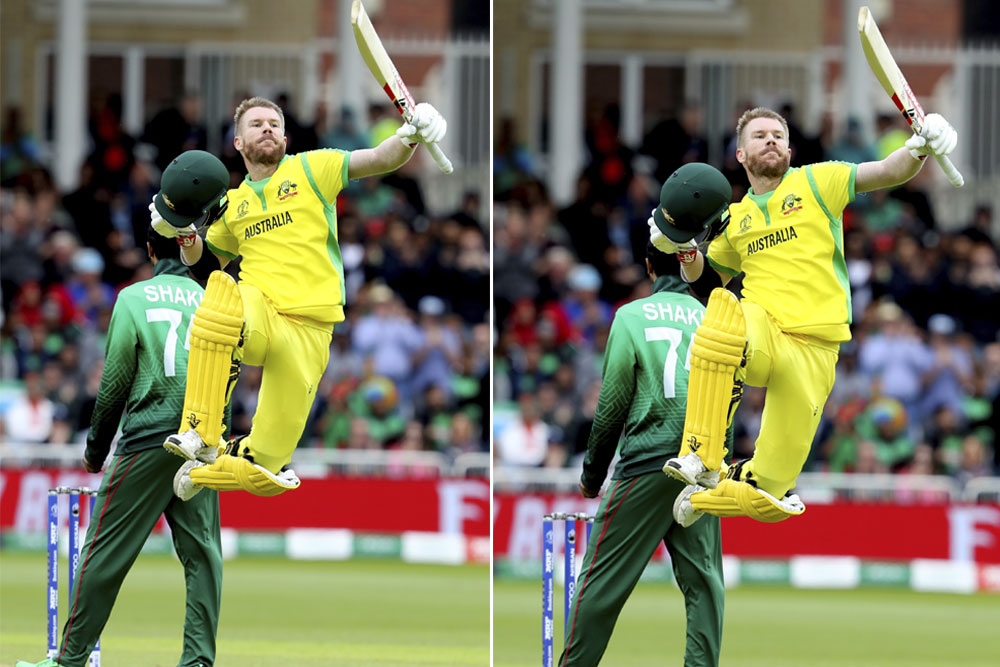 Warner knows how to celebrate. AP Photo
5:13 PM IST: David Warner gets his second hundred of this World Cup. 100 with a single, in 110 balls with seven fours and two sixes. Four singles from Shakib Al Hasan's fifth over. AUS-190/1 after 33 overs.
5:10 PM IST: Mehidy Hasan on with his ninth over. David Warner hits the first ball for a four, then run three off the last ball to reach 99. Nine runs from the over. AUS_186/1 after 32 overs.
5:07 M IST: Shakib Al Hasan returns for his fourth over. Nine runs from the over, including a four off the last ball. Usman Khawaja runs down the last ball to fine leg. Delicate touch. AUS-177/1 after 31 overs.
5:04 PM IST: Mehidy Hasan continues non-stop. Singles off first three balls, then Usman Khawaja blocks the remaining deliveries. AUS-168/1 after 30 overs. 29 runs from the last five overs.
5:01 PM IST: Soumya Sarkar on with his fifth over. And suddenly, David Warner makes a move. He hits the second and fifth balls for fours. 12 runs from the over. AUS-165/1 after 29 overs. 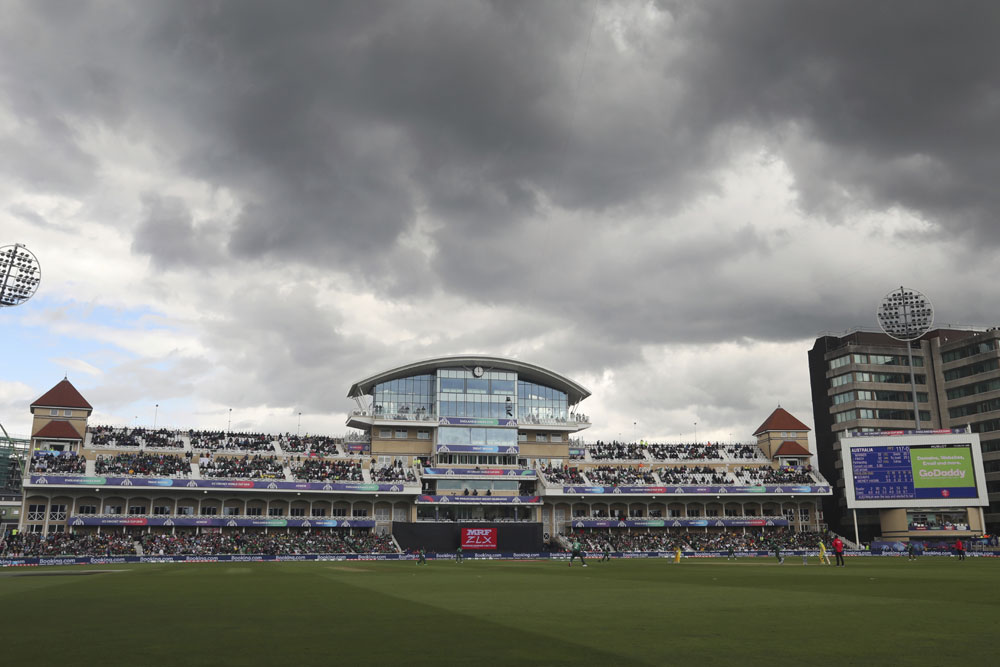 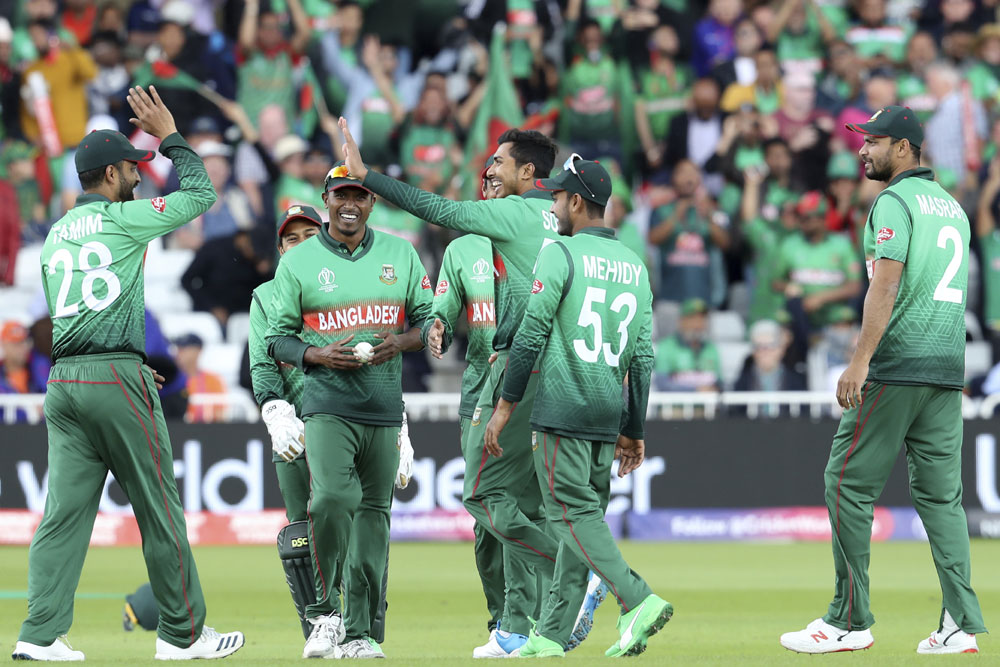 A moment to cherish. AP Photo 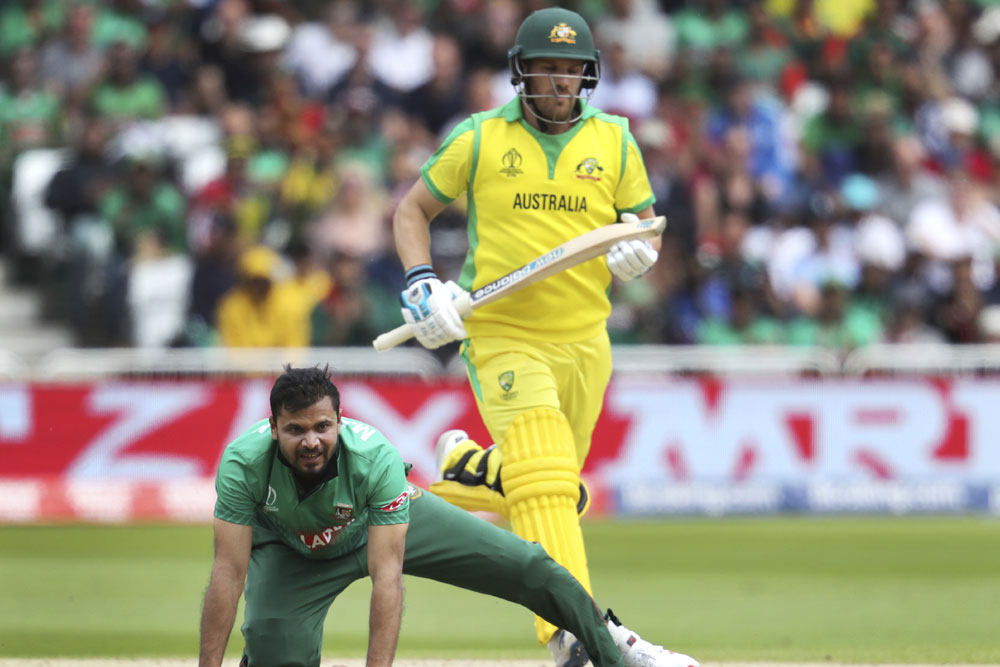 3:55 PM IST: Shakib Al Hasan on with his second over. One busy over. Four singles and a three, off the fourth ball as David Warner plays it past cover fielder. Seven runs from the over. AUS-67/0 after 12 overs. Both the Aussie openers are in 30s.
3:50 PM IST: Mashrafe Mortaza continues. Five very good balls, then a bad ball, to spoil the over. Aaron Finch gently glides the last ball to fine leg for a four. Seven runs from the over. AUS-60/0 after 11 overs.
3:46 PM IST: Bowling change. As expected 'the real tiger' Shakib Al Hasan into the attack with hos left-arm spin. Two dot balls to Aaron Finch. But the Aussie skipper hits a crunchy straight drive for a four off the third ball. And fifty-run opening stand for the defending champions. Six runs from the over. AUS-53/0 after ten overs.
3:42 PM IST: Mashrafe Mortaza continues. A double off the first ball as Aaron Finch plays it to mid-wicket, then four dots -- all hitting to fielders. A quick single to end the over. Three runs from the over. AUS-47/0 after nine overs.
3:38 PM IST: Mustafizur Rahman on with his fourth over. Singles off the first and third balls, then David Warner plays a very good looking pull shot for a six off the fourth ball. Fizz pays the price for dropping it short. The over ends with a very well directed bouncer to Warner. Eight runs from the over. AUS-44/0 after eight overs. 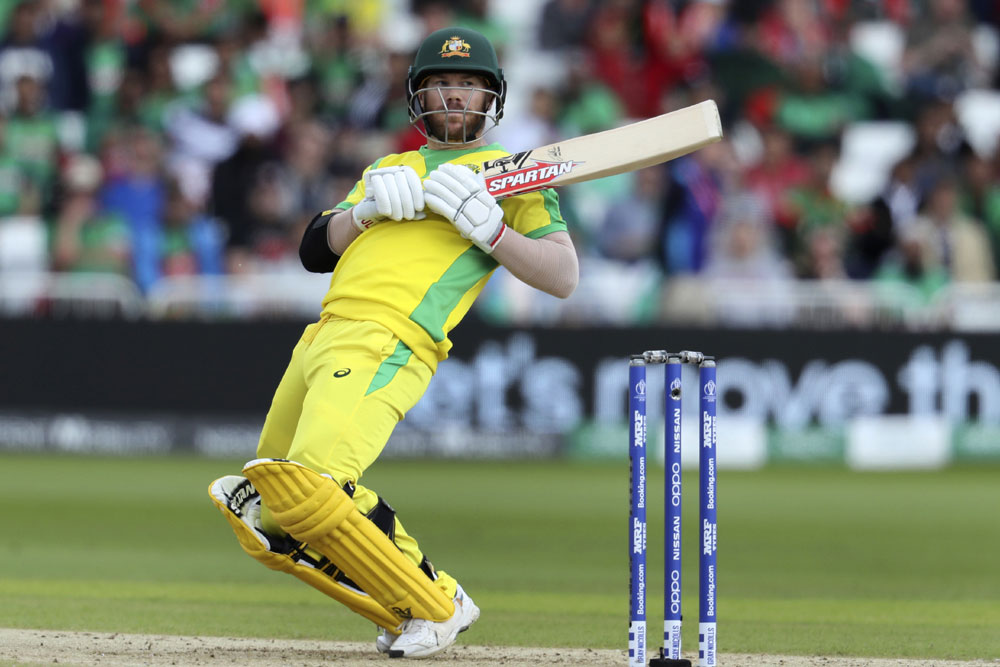 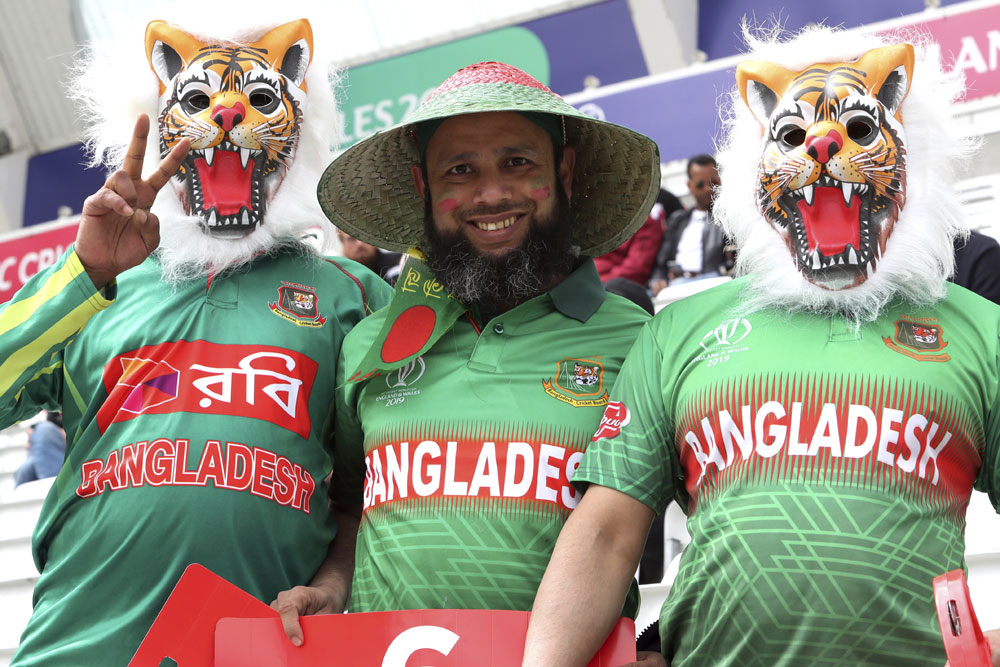 Will they roar today? AP Photo

2:40 PM IST: Three changes for Australia, two for Bangladesh. Marcus Stoinis, Adam Zampa and Nathan Coulter-Nile in for Shaun Marsh, Jason Behrendorff and Kane Richardson in the Aussies XI; while Rubel Hossain and Sabbir Rahman are in for Mohammad Saifuddin and Mosaddek Hossain in the opposition camp.

2:33 PM IST: Australia win the toss and bat first against Bangladesh.
2:27 PM IST: Toss in a bit. Meanwhile, another injury scare for India. Three-dimensional Vijay Shankar reportedly suffered an injury during nets.
Should Australia, five-time World champions, worry about facing Bangladesh? This is the main talking point ahead of their World Cup fixture at Nottingham. Believe it or not, Aaron Finch & Co are a worried lot. And Shakib Al Hasan is the player in focus. If the 32-year-old from Magura continues his red-hot form, then the Tigers can hope for another big scalp.
Also Read: 6 Fun Day Trips From Nottingham
In fact, Aussie wicketkeeper Alex Carey has admitted that "Bangladesh are playing some really good cricket at the moment and it's led by Shakib".

The truth, however, is -- Bangladesh are not only about Shakib. They are known for punching above their weight. They have not only become a very consistent ODI side but started producing commendable results against the so-called heavyweights. The point in case -- the wins against South Africa and West Indies, and the fight against New Zealand in this World Cup.
Meanwhile, Aussies have not been at the top of their game even though they have managed to win four out of five matches so far, as against Bangladesh's two out of five.

As expected, Australia beat minnows Afghanistan easily, but struggled against West Indies before posting good wins against erratic Pakistan and struggling Sri Lanka. Aussies have suffered batting collapses and have been put under pressure by the opponents. They will be tested again.

And Bangladesh will be more than eager to test the Aussies -- to upset the apple cart, to challenge the status quo. For that to happen, Mashrafe Mortaza & Co will need to invoke the killer shows they have produced against the Proteas and Windies. They are indeed the giant killers, brimming with confidence. A win against the mighty Aussies will surely reinforce the fact that they are no more underdogs, while also making good grounds in the fight for a top-four finish, for their semi-final appearance.

Now is the time for Bangladesh to live their dreams and be counted as one of the contenders, if not the favourites.

Australia have defeated Bangladesh 18 times in 19 completed ODIs. Their only loss came in Cardiff, 14 years ago.

Australia are looking to win the World Cup for the fifth time in six editions, while Bangladesh are yet to reach the semi-final stage.

Steve Smith is likely to have his 100th ODI innings for Australia. He has scored 3,674 runs across his previous 99 knocks.

Shakib has managed to register 50 runs or more in five successive ODI knocks. No Bangladeshi has ever posted six half-centuries on the trot.

Mitchell Starc is the only pacer to claimed four four-wicket hauls in World Cup. His 35 wickets in 13 matches is the third most among the bowlers who are playing in this World Cup, after Lasith Malinga (47 wickets in 25 matches) and Imran Tahir (37 wickets in 18 matches).

"I think he's (Shakib) in probably career-best form with the white ball. So we sort of know the areas and line and length we want to bowl to him and I guess out there we'll assess the conditions as well... No extra planning, I don't think. We normally have our plans going into every game and we assess each player accordingly," Australia wicketkeeper Alex Carey.

"Shakib is brilliant. The way he's playing, I think we need to support him as well, his team. It's not been a one-man army, but as you said he's been doing outstandingly," Bangladesh captain Mashrafe Mortaza.