New Zealand, like India, are in contention for a semifinal spot from Group 2. Watch NZ v SCO live. 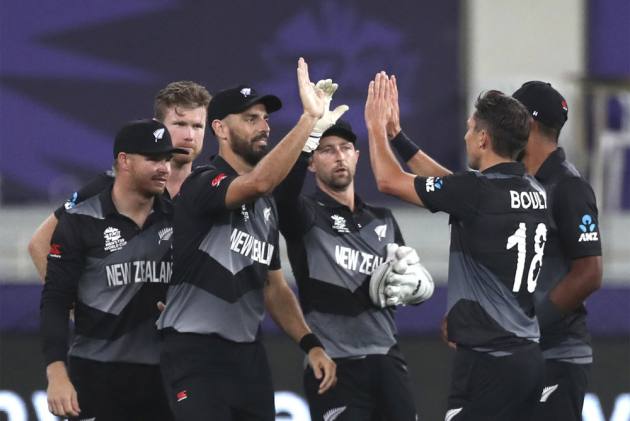 Flying high after defeating India, New Zealand would be itching to take on Scotland and collect two more points in order to inch closer to booking their spot in the ICC Men's T20 World Cup semifinals. New Zealand and Scotland will meet at the Dubai International Cricket Stadium on November 3 (Wednesday).

New Zealand vs Scotland match will be live telecasted as well as live streamed on digital devices from 3.30 PM IST. India play Afghanistan later in the evening from 7:30 PM in Abu Dhabi.

Interestingly, New Zealand and Scotland have played once before. The teams met during the 2009 ICC World T20 at the Kennington Oval in London. Former cricketer Brendon McCullum-led New Zealand defeated Scotland by seven wickets.

Kiwis, who were yet to open their account before their match against India, stunned the former champions by eight wickets thanks to their spinners Ish Sodhi and Mitchell Santner, and fast bowler Trent Boult.

Although Santner didn't get a wicket, his spell in the powerplay didn't allow India batters to attack. Ish Sodhi collected the prized wickets of Rohit Sharma and Virat Kohli.

If New Zealand beat Scotland they would be in a position to make things difficult for India, leaving the contest to secure a semifinals berth between Afghanistan and New Zealand.

On the other side, Scotland are yet to open their account. The European team sits at the bottom of Group 2 with a weak net run rate.

Scotland entered the Super-12 on the back of some amazing performances in the T20 World Cup 2021. The side is still relatively new to world cricket but if they want to be part of the premier events they have to put up a show.

For starters, they can do so by defeating New Zealand which will benefit Afghanistan and entangle New Zealand's equation.