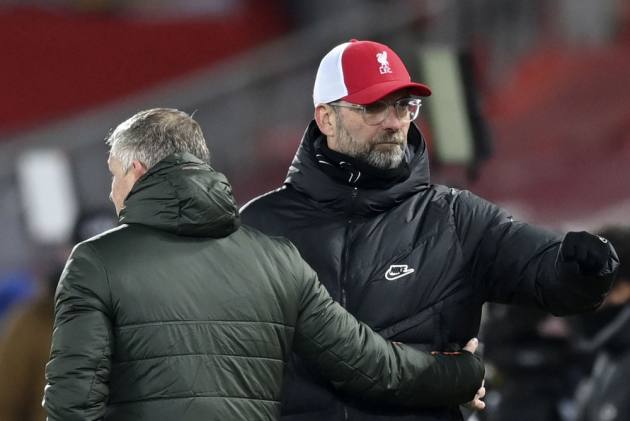 Manchester United kept their place at the top of the Premier League after a 0-0 draw with Liverpool at Anfield on Sunday. (More Football News)

An encounter of few chances saw the Red Devils extend the champions' scoreless run to three matches, their longest such streak in the top flight since March 2005, in what was Jurgen Klopp's 200th league game in charge.

Alisson denied Paul Pogba from arguably the best of the opportunities as United's winless league run against the Reds reached five matches for the first time since 2002.

Still, the result edged them two points clear of Leicester City and ensured Liverpool remain one further back.

3 – Liverpool have failed to score in three straight @premierleague games for the first time since March 2005, whilst they are only the third different reigning PL champion to do so after Arsenal in 1998-99 & Leicester in 2016-17. Defused. #LIVMNU pic.twitter.com/xgtAZAcCrz

It was 14 minutes until either side managed a shot, Roberto Firmino seeing an effort blocked and Andy Robertson drilling the loose ball over.

Liverpool were controlling possession as United looked to exploit the makeshift centre-back pairing of Fabinho and Jordan Henderson on the break, with Robertson doing well to stop Marcus Rashford after a promising move.

Bruno Fernandes whistled a free-kick just wide and Firmino scuffed a shot straight at David de Gea as Liverpool broke forward quickly, that effort proving the only one on target of the first half.

United captain Harry Maguire did well to deny Firmino a clear opening from a Robertson cross and divert a Mohamed Salah effort wide, before Fernandes fired his side's first shot on target straight at Alisson with 65 minutes played.

Edinson Cavani came off the bench as United sought a little more presence in attack, with Pogba then heading straight at the Liverpool keeper from a Fernandes corner.

Fernandes was thwarted after United's best move of the match, Alisson sticking out a foot to save after the midfielder turned Luke Shaw's cross goalwards.

De Gea flung himself to tip Thiago Alcantara's fierce strike wide before Pogba was foiled by Alisson, the midfielder blasting straight at the Brazil international after Aaron Wan-Bissaka's pass.

What does it mean? Dour draw favours United – and City

Given the table, this result serves United's purpose better than Liverpool's, but Solskjaer will presumably leave Anfield with regret after seeing Alisson make two decisive saves despite his team's general lack of enterprise.

They have now failed to score in four consecutive league matches against other 'big six' sides and are winless in those contests since a 2-0 derby victory over Manchester City last March.

Perhaps the team to benefit the most from this uninspiring Anfield clash were City, who went into Sunday evening's clash with Crystal Palace knowing they could go a point clear at the top by winning their two games in hand.

They might have enjoyed 66 per cent of the possession, but Liverpool owed their point to a pair of excellent second-half saves from Alisson.

Having denied Fernandes with his foot, the former Roma man reacted well to turn Pogba's strike aside, although the United man will be disappointed to have fired straight at him.

This was a surprisingly slack display from Fernandes, who this week was confirmed as the first man to take four Premier League Player of the Month awards in the same calendar year, landing the December prize.

His passing accuracy was a disappointing 58 per cent, he failed to convert one of United's two clearest chances, and he was visibly angry when he was substituted late on for Mason Greenwood.

1.6% - Since scoring with seven of their 14 shots against Crystal Palace (50%), Liverpool have scored just one goal from 62 shots in their last four Premier League games, a conversion rate of 1.6%. Problems. #LIVMNU pic.twitter.com/zStsoHF4zn

- Liverpool have failed to score in any of their last three Premier League matches, their longest run since another three-match spell in March 2005.
- Liverpool and United have drawn 0-0 at Anfield in the league three times in the last five seasons, as many times as in the previous 48 top-flight campaigns.
- United are unbeaten in their last 16 away matches in the Premier League (W12 D4). Only once have they gone longer without a defeat on the road in the competition (17 games ending in September 1999).
- Liverpool are now unbeaten in their last 68 Premier League games at Anfield, earning 178 out of a possible 204 points over this run.
- United are the first side to stop Liverpool scoring at Anfield in a Premier League match since Manchester City in October 2018 – this was Liverpool’s 43rd such game since then.
- Under Jurgen Klopp, Liverpool are unbeaten in all seven of their Premier League games at Anfield when facing the side starting the day top of the table (W3 D4).
- Rashford was called offside five times in this match, the most of any Premier League player this season and the most by a United player since Robin van Persie (six) vs Spurs in January 2013.

Before these teams meet again in the FA Cup next Sunday, United have a league trip to Fulham on Wednesday and Liverpool host Burnley a day later.