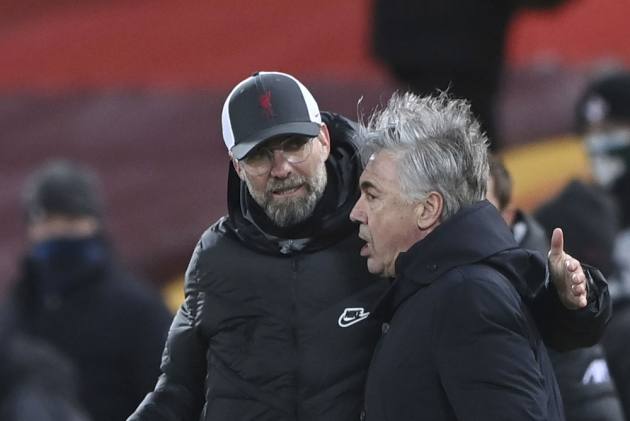 In a match that Liverpool went on to dominate after a lacklustre first-half display, Richarlison's third-minute goal and Gylfi Sigurdsson's late penalty proved enough for Everton to claim a first away win over their Merseyside rivals since September 1999.

Liverpool's efforts were not helped by the loss of Jordan Henderson to injury, with Sadio Mane missing two presentable chances that might have made Everton pay for profligate finishing from Seamus Coleman and Richarlison.

The centre of derby drama in recent meetings, Jordan Pickford also played a pivotal role, making a wonderful save from Mohamed Salah, setting the stage for Sigurdsson to condemn Jurgen Klopp's champions to a fourth successive home reverse.

Everton made a blistering start in the blustery conditions – James Rodriguez sliipping a pass through to Richarlison, who finished crisply across Alisson and into the left corner to put the Toffees ahead in a Merseyside derby for the first time since 2010.

Henderson had a winner disallowed by VAR in October's reverse fixture, and his wicked volley would have restored parity if not for Pickford's finger-tip save, with Everton's goalkeeper then denying Trent Alexander-Arnold.

Liverpool were dealt a blow on the half-hour as Henderson succumbed to injury, and Coleman should have compounded the hosts' frustration when he met Lucas Digne's cross, only to head straight at Alisson.

A rare Everton attack resulted in Richarlison racing behind Liverpool's defence, only for the Brazilian to hesitate when one-on-one with Alisson.

Salah seemed set to punish Everton when Liverpool carved out another chance, but Pickford rushed out to smother the angle.

And that proved vital, with Calvert-Lewin soon adjudged to have been fouled by Alexander-Arnold at the other end of the pitch after Alisson's fine save.

After a long wait for a VAR check, Sigurdsson slotted in the resulting penalty as Carlo Ancelotti masterminded the Toffees' first derby victory in over a decade.

What does it mean? Reds suffer a bout of the Blues

In January 2020, a full-strength Everton side went down to a youthful Liverpool in the FA Cup. Just over a year later, the Merseyside teams are level on points in the battle for the Champions League places, with Ancelotti's side having a game in hand.

24 - Everton picked up their first win over Liverpool in 24 meetings in all competitions (D12 L11) – ending what was Liverpool’s longest ever unbeaten run against a single opponent. Finally. pic.twitter.com/fpEqMwX5Ki

England shot-stopper Pickford made headlines for the wrong reasons in October’s fixture at Goodison Park, with his tackle on Virgil van Dijk the cause of much furore.

It has been a season littered with individual mistakes, yet on Saturday the 26-year-old came up big for his side, making some excellent stops – from Henderson and Salah especially. Another smart stop from Georginio Wijnaldum in stoppage time saw him end the game with six saves, one claim and one punch.

Without his three leading centre-backs, Klopp is now shorn of the two players who have been filling in at the heart of defence, with Henderson seemingly set to join Fabinho on the sidelines.

Among defending Premier League champions, only Leicester City in 2016-17 (21) and Chelsea in 2015-16 (30) have had fewer points after 25 games in the season after winning the title than Liverpool’s 40 this campaign, and if their captain is to miss an extended period, there might be no sign of their form turning around anytime soon.

- Everton picked up their first win over Liverpool in 24 meetings in all competitions (D12 L11) – ending what was Liverpool’s longest ever unbeaten run against a single opponent.

- This ended Everton’s run of 23 winless visits to Anfield to face Liverpool, taking all competitions into account (D10 L13).

- Liverpool manager Klopp has suffered four consecutive league defeats for the first time since November 2014 when he was in charge at Borussia Dortmund, while he has lost four in a row at home in league competition for the very first time in his managerial career.

- Richarlison is only the third Everton player to score in back-to-back Premier League appearances at Anfield for the club, after Tim Cahill and Kevin Campbell.

- Sigurdsson has scored five away goals against Liverpool in all competitions - more than he has away at any other opponent in his career in England.

Both teams have something of a break until their next matches, with Liverpool facing Sheffield United on February 28 and Everton hosting Southampton a day later.