Mohamed Salah and Sadio Mane were on target as Liverpool beat RB Leipzig 2-0 to reach the quarter-finals of the Champions League. 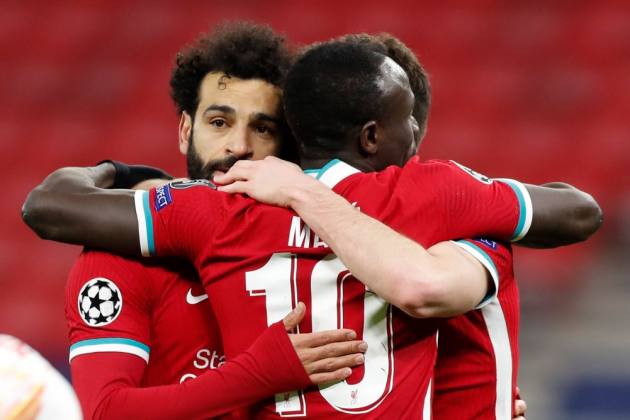 Mohamed Salah and Sadio Mane struck in the space of four second-half minutes as Liverpool beat RB Leipzig 2-0 to reach the quarter-finals of the Champions League. (More Football News)

Jurgen Klopp’s side travelled to the Puskas Arena smarting from suffering a sixth consecutive home defeat in the Premier League at the hands of Fulham, but there was a sense of deja vu as they moved into the last right.

At the same venue where Salah and Mane gave the Reds a 2-0 first-leg advantage in what was Leipzig's home leg, the Reds forwards were on target once again to seal a 4-0 aggregate win.

Liverpool wasted a host of chances, but Alexander Sorloth hitting the crossbar was the closest Leipzig came as last season's semi-finalists bowed out.

Mane volleyed over amid a bright start for the Premier League champions, who had Fabinho back in midfield, before Dani Olmo was denied by the alert Alisson at the other end.

Liverpool did not resemble a side devoid of confidence and Peter Gulacsi showed sharp reactions to palm Diogo Jota's powerful header from a corner beyond the crossbar.

Salah wasted a great opportunity to open the scoring when Thiago's sublime pass sent him clear, but the forward shot straight at Gulacsi before he and Mane were unable to finish following up.

Emil Forsberg dragged a shot tamely wide and Jota spurned a golden chance when he broke through the middle but failed to beat Gulacsi, with the Portugal international then only finding the side-netting when he should have scored following an Dayot Upamecano error on the stroke of half-time.

Jota allowed Gulacsi to save all too easily yet again 10 minutes into the second half and Salah blazed the rebound over the bar as the breakthrough remained elusive.

Sorloth, introduced as a half-time substitute, headed Hee-Chan Hwang's inviting cross against the bar midway through the second half, with Leipzig battling to stay in the competition.

Liverpool had one foot in the last eight 20 minutes from time, though - Jota setting up Salah in a rapid attack and the Egypt international cutting into the penalty area before finding the bottom corner with his left foot.

Divock Origi then whipped in a brilliant cross for Mane to tuck home a second as Klopp's men breezed through.

What does it mean? Relief for Reds

Klopp's misfiring side had failed to score in their previous two matches and suffered six defeats in eight games ahead of a trip to the Hungarian capital.

The six-time champions of Europe, who were missing the injured Roberto Firmino, posed much more of an attacking threat, registering five shots on target in the first half.

They were also wasteful in the second half before Salah scored his 25th of the season and Mane netted in a competition Liverpool may yet have to win in order to feature in it again next season, as they are only eighth in the Premier League. Leipzig must turn their attention back to the tall task of trying to dethrone Bundesliga champions Bayern Munich.

12/13 - In all European competitions under Jürgen Klopp, Liverpool have now progressed from 12 of their 13 two-legged knockout ties (including qualifiers), only failing in last season’s last 16 against Atlético de Madrid. Smiles. pic.twitter.com/CfFFlMaS2O

Fabinho has proved to be more than able when asked to fill in at centre-back for the injury-hit Merseyside club, but he has been sorely missed in the middle of the park.

The Brazil international was outstanding alongside the impressive Thiago and Georginio Wijnaldum, gaining possession a dozen times as he read the game brilliantly to provide a shield in front of the back four.

There was an assist for Jota, but the former Wolves man really ought to have been on the scoresheet.

He hit the target with three of his four shots and, although he will wonder how he did not find the back of the net, Jota can be forgiven after such a long absence with a knee injury.

Liverpool go in search of a much-needed Premier League win at Wolves on Monday, a day after Leipzig continue their Bundesliga title challenge at home to Eintracht Frankfurt.