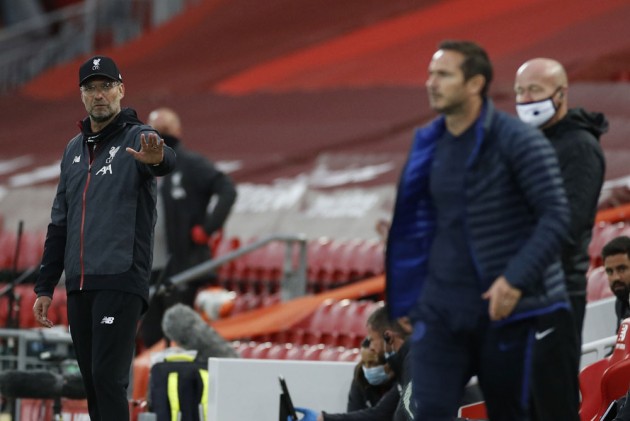 Liverpool boss Jurgen Klopp has singled out Chelsea as the favourites to win the Premier League title due to the "unbelievable" depth of Frank Lampard's squad. (More Football News)

The Blues ended a day top of the table for the first time since September 2018 thanks to Saturday's hard-fought 3-1 comeback win over Leeds United.

They have won four of their last five top-flight matches and are on the division's longest unbeaten run of nine games, having also topped their Champions League group.

And with Chelsea's myriad of new signings quickly settling in, Klopp believes the west London side are now the team to finish above if Liverpool are to retain their title.

"I don't feel in the moment that we chase anybody or somebody chases us," said Klopp ahead of Sunday's home clash with Wolves.

"If I watch football games I see Tottenham is obviously doing pretty well, that Chelsea for me in the moment looks like the favourite - bigger squad, great players, play football.

Won’t quite be this full tomorrow, but will be great to have fans back with us#comeontheboys #YNWA pic.twitter.com/4ONK1qjFG6

"Now they are full in and have unbelievable opportunities to change between the games and from one game to the other. That's it. You watch it but we don't chase them.

"We play them when we play them and that was how we saw it last year as well. Pressure is there but it's about yourself. The pressure is there to win the game and we want to win against Wolves. We play only Wolves and nobody else.

"It's always like this. It's much too early to think about who is ahead of who or whatever. It's just the situation.

"I said it before, this season is not about setting a target and going for it, it's about getting through it with the best possible football you can play - and that's what we try to do.

"That differs from weekend to midweek sometimes because of some circumstances, but it's still the target for us all the time. Be fully focused on the next game, the next opponent, especially not that early about other results."

Liverpool and Tottenham trail Chelsea by a point with a game in hand to play on Sunday in what is shaping up to be a tight battle for the title.

He could become just the second player to score both for and against Wolves in the league, after Stephen Hunt#LIVWOL pic.twitter.com/qYcu51A5jv

The reigning champions face a potentially difficult test against Wolves in what will be a reunion with his former club for in-form forward Diogo Jota.

He is looking to become the fourth player to score in each of his first five home Premier League matches for a club, along with Alan Shearer, Les Ferdinand (both Newcastle) and Jermain Defoe (Portsmouth).

Jota's impressive start to life at Anfield has allowed Klopp to give his previously established front three trio of Mohamed Salah, Roberto Firmino and Sadio Mane a breather at times.

And Klopp feels his side now have an advantage they did not have in their title-winning campaign thanks to the Portugal international.

"He's doing exceptionally well at the moment, absolutely. But to keep that standard we have to work really hard, we have to keep him in a good shape, score goals because the other boys do that usually," he said.

"That's clear. For us, the most important thing was that we don't have to bite our nails pretty much in each game and hope they somehow come through and we can bring them in the next game again - especially not in this season.

"That's not a real lateral situation because it's only one player and, how I said, it's the only line - the front three line - where we have more players than we can line up in one game, I would say.

"All other positions are pretty much, who can walk will play or will be a kid. Both is fine. But there's nothing bad in that situation. Who they are, they wouldn't be where they are if they couldn't deal with a situation like that.

"They are completely fine with Diogo and Diogo is fine with them. They are overly happy that he had that brilliant start, as I am obviously. But now that's already gone and we have to carry on."

Liverpool have lost just one of their 12 Premier League meetings with Wolves (W9 D2), winning each of the last seven in a row by an aggregate score of 15-2.