Alisson Becker became the first goalkeeper in Liverpool history to score a competitive goal for the club, earning a 2-1 win over West Brom 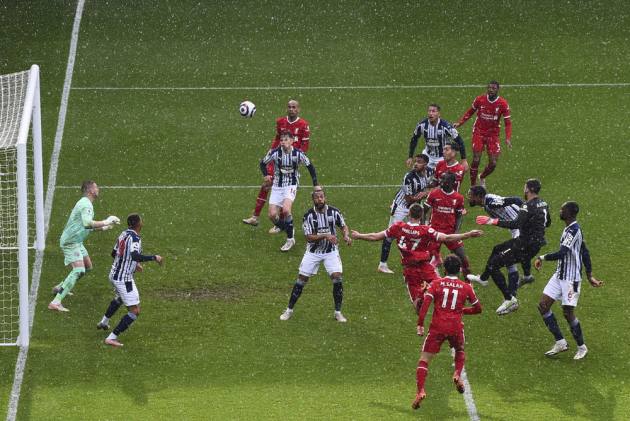 More stories from A Correspondent
View All

Jurgen Klopp has revealed his role in Alisson's "world class" late winner against West Brom: not telling the Liverpool goalkeeper to head back to his own box. (More Football News)

The Reds goalkeeper kept his team's hopes of Champions League qualification on track as he headed in a Trent Alexander-Arnold corner to make it 2-1 in injury time at the Hawthorns on Sunday.

In doing so, the Brazilian became the first goalkeeper in the club's 129-year history to find the back of the net in a competitive fixture.

But, when asked if he had called for his No.1 to go up for his big moment, Klopp replied: "No, I looked at the corner. I don’t exactly know. I saw Ali starting [to go up].

"My part of the goal is that I didn’t shout, 'Stay back!' I just let him run.

"The last minute of the game, nobody has to ask usually a ‘keeper to go in the opposite box when you have to win, which we obviously had to.

"He went there and what a goal! It was incredible. Wow. We saw it now already 10 times back in the dressing room. It's absolutely incredible.

"If Olivier Giroud scores a goal like this everybody says it's a world-class goal. When Alisson is doing it, we have to say the same."

After scoring, Alisson was swamped by team-mates who are fully aware of what he has been through during a difficult year that was made even more testing by the loss of his father.

On that reaction, Klopp added: "The way that his team-mates showed today how much they like him is the best description.

"He is just a great guy and it couldn't have been for a better person to have such a special moment after all that he went through. I am really, really happy for him."

Klopp did not only have good news to share as he reflected on a big win, though, the German revealing that Liverpool have been hit by two further injury blows.

And they mean Diogo Jota and Ozan Kabak will not feature in the remaining two games of the season against Burnley and Crystal Palace.

He continued: "Diogo, I don't know actually. As I said, it is not too serious but as always, you have to wait [to see] how it develops, how it heals.

"It is a little bone in the foot and we have to see. I think he will now be in a boot for two weeks or so and when he gets out of the boot then the doctors will check how it developed, how far the progress is, so I don't know that but of course, it is not a top moment.

"Ozan isn't in the long-term [injuries] but nobody is coming back, I think."